Victoria teenager Quinn Ngawati became the first Canadian-born player to feature for the Wolfpack as Toronto thumped the Gloucestershire All Golds 62-10 Saturday to extend its rugby league win streak to 14 games. 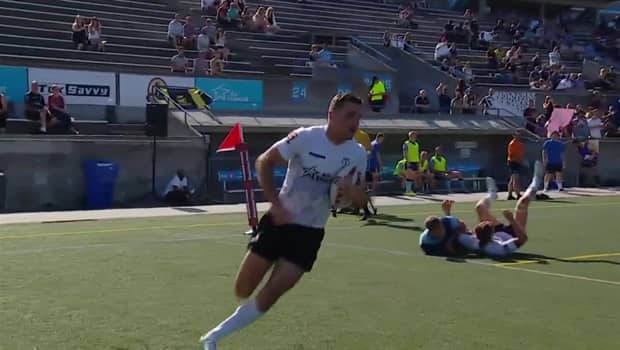 Toronto Wolfpack cruise past All Golds

The Toronto Wolfpack put down some deeper roots in addition to recording another lopsided win Saturday as Victoria teenager Quinn Ngawati became the first Canadian-born player to feature for the fledgling rugby league team.

Ngawati, who turned 18 in June, came off the bench in the 55th minute in a 62-10 romp over the Gloucestershire All Golds that extended the Wolfpack's win streak to 14 games.

The six-foot-four, 212-pound forward wasted little time getting involved in the fray on both offence and defence. He did not look out of place, flicking a nice one-handed pass to set up a try.

He showed a cool head after the game as well.

"To be honest, I just take every day as it comes," said Ngawati. "I just try to get better every day and whatever comes out of it, it's always going to be a bonus. This definitely tops the chart but as coach [Paul Rowley] said there's a lot of work to do and I'm looking forward to that."

Ngawati (pronounced Now-r-tee) is the first Canadian-born player to play pro rugby league according to Canada Rugby League, the governing body of the sport in Canada.

"I thought when he took to the field, he answered any questions that we had," said Rowley. "Because the one thing we never knew was how tough is Quinn Ngawati. And he ticked that box, more than ticked it. I thought he was outstanding.

"I think the whole day today is about Quinn Ngawati."

While the Wolfpack sport a pair of Canadian internationals in Rhys Jacks and Tom Dempsey, they are Australian-born and qualify to wear the Maple Leaf by virtue of their bloodlines. Most of the team comes from Britain although there are players who carry the colours of New Zealand, Samoa and Tonga.

Ngawati was one of three players to survive the Wolfpack's tryouts last year. While he is now the only one left, the teen was seen as one for the future until a spate of injuries got Rowley to thinking about bringing him in for another look during the current four-game home stand.

Ngawati said he was in class — possibly physics — at St. Michaels University School when the call to come east was made by the Wolfpack. He graduated from high school on June 19 and was on a plane June 21.

The big Canadian impressed during training and finally got his chance Saturday.

Asked after the game whether Ngawati's stay would be extended, Rowley replied: "I want to keep him."

Then, only half-joking, he added: "I want to keep him forever."

Ngawati's father is from New Zealand with Maori roots — a background that is proudly illustrated via the tattoo on the back of Quinn's calf. Ngawati Sr., played rugby league so Quinn grew up immersed in both union and league. His mother is Canadian, meeting her future husband in New Zealand.

Hall added nine conversions before an announced crowd of 7,139 on a glorious summer afternoon at Lamport Stadium.

It could have been worse. Toronto crossed the try-line six more times but was unable to get the ball down because of some valiant defending.

Skipper Steven Parry and Lewis Reece scored tries for the All Golds (6-8-0). Jack Mitchell added a conversion for the visitors, who took their lumps physically.

It was more of the same for the fully professional Wolfpack, who have had their way with opposition in the Kingstone Press League One, the third tier of English rugby league.

Toronto, rugby's first transatlantic team, is starting at the bottom as it bids to win promotion to the second-tier Championship and then the elite Super League. It has promised to take care of travel and housing costs for visiting teams until it cracks the top level.

Toronto has led that chase all season, topping the table while averaging 60 points a game over its first 14 contests.

The injuries forced a reshuffle of the backline with winger Liam Kay moving to centre, allowing Hall to start at No. 6. Burroughs came in for Kay on the wing.