The Canadian men's rugby sevens team made history on Sunday, taking a 26-19 victory over the U.S. in the Singapore Sevens final to capture their first-ever Cup win.

Lucas Hammond scores winning try in 26-19 victory over the U.S. 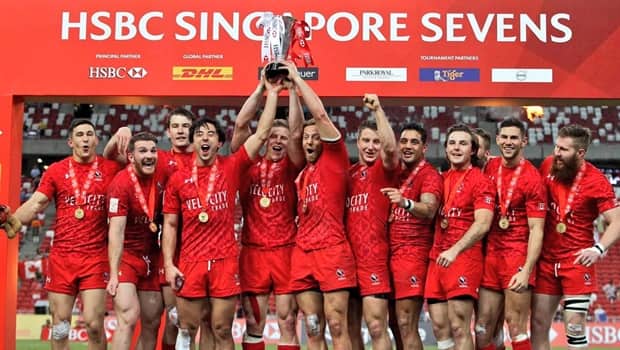 And the Canadians did it the hard way at the Singapore Sevens, defeating No. 4 New Zealand 26-14 and No. 3 England 17-5 before dispatching the fifth-ranked U.S. Eagles 26-19 in the final.

Series leader South Africa and No. 2 Fiji were upset in the quarter-finals.

Canada, which came into the weekend ranked ninth in the standings, raced into a 19-0 lead in the final but the Eagles roared back with 19 points of their own before Lucas Hammond scored the winning try with less than two minutes remaining.

The tournament victory came in Canada's 140th event on the circuit.

The Canadians said a 35-7 thumping at the hands of Olympic champion Fiji on Saturday — their only loss in six games — had proved to be a turning point.

"It's an unbelievable feeling," he added. "I'm so proud of the guys and how hard we've worked over the past year."

Coach Damian McGrath led Samoa to an upset tournament win in Paris last season. Now he has done the same with Canada.

"It's incredible," said McGrath, an English native who took over Canada this season. "Last night we were beaten by Fiji so we had a little bit of soul-searching and then we came back and beat some of the best teams in the world. This will show that Canadian rugby has so much to offer."

The Cup win moved Canada up two places from ninth in the overall standings after eight stops on the 10-event circuit.

"It's an unbelievable feeling," said Nathan Hirayama, Canada's all-time leading sevens scorer with 1,047 points. "A lot of us have been on the scene a while and we came through some dark times, but to come away with that win was special."

It was also a statement from a Canadian team whose Own The Podium funding for the 2017-18 fiscal year was taken away earlier this year after a season that saw the team fail to qualify for the Olympics.

The Canadian men have been on a roll of late.

Singapore marked the fourth straight tournament — and fifth in the last six — that Canada had reached the Cup quarter-finals. The Canadians' best result this season prior to Sunday was fourth in New Zealand in January.

Canada had tied for seventh in the three events prior to Singapore.

The Canadians had a dream start in the final against the fifth-ranked Americans on early tries by Matt Mullins, Harry Jones and Mike Fuailefau.

Mullins opened the scoring when he beat two tacklers down the sideline and reached the line before speedster Perry Baker could run him down.

A fine support run from Jones led to the second try from a pass from Moonlight and a converted try by Fuailefau made it 19-0 after the Americans turned the ball over at the breakdown following the ensuring restart. A Canadian kicked it ahead and Fuailefau was first to touch it down.

The American forwards then helped turn the tide, winning the ball at the breakdown and setting the stage for tries by Baker and Stephen Tomasin that cut the lead to 19-12 at the break.

"Remember that self-belief that brought you here,' McGrath told his players at the break.

But the Americans struck first with Baker using his pace to beat Moonlight and Hirayama and tie the game at 19-19 early in the second half.

The winning try came on the heels of a desperate Canadian defensive stand at the goal-line with Fuailefau and Jones preventing Tomasin from touching the ball down.

The U.S. turned the ball over after the ensuing scrum and Canada patiently worked its way down the field in several phases, completing some dozen passes before Hammond found a crease in the U.S. defence and raced through it.

After going 2-1 Saturday, when they opened with wins over Russia and Hong Kong, Canada faced an old foe in New Zealand in Sunday's quarter-final. The Canadians ran the All Blacks close in a 15-14 loss in Vancouver last month but their overall record against New Zealand going into Sunday's clash was 2-32-1.

Canada ignored the statistics, however, and led 19-7 at the half on the strength of two tries by Hirayama and one by Fuailefau. A try by New Zealand's Trael Joass cut the lead but Hirayama's third of the match sent Canada into the semifinal.

England led 5-0 at the half on a Ollie Lindsay-Hague try. But Canada reeled off second-half tries by Isaac Kaay, Justin Douglas and Fuailefau to keep progressing.

The U.S. had upset Fiji in one quarter-final while Australia beat Series leader South Africa in another.

Paris hosts the next tournament May 13-14.

Canada has won three events on the women's sevens circuit, lifting the trophy most recently in Sydney in February.