Stephen Curry says it's difficult to avoid boorish basketball fans at the NBA Finals. But heckling his family is "stupid." A video clip shows Curry's parents Dell and Sonya being heckled after the Raptors' loss to Golden State in Game 5 on Monday in Toronto.

'We handle all that stuff with class and try to ignore it the best we can,' says Golden State star

Stephen Curry says it's difficult to avoid boorish basketball fans at the NBA Finals. But heckling his family is "stupid."

A video clip shows Curry's parents Dell and Sonya being heckled as they emerged from a van in front of their downtown hotel after the Raptors' loss to Golden State in Game 5 on Monday in Toronto.

One fan repeatedly yells "F—- you!" at Sonya, who points at the fans and says something in response that is inaudible in the video posted by sports website The Render.

Asked about the incident after Golden State's shootaround on Wednesday, Steph Curry wasn't surprised it happened.

WATCH | Curry says it's best to handle heckling with class: 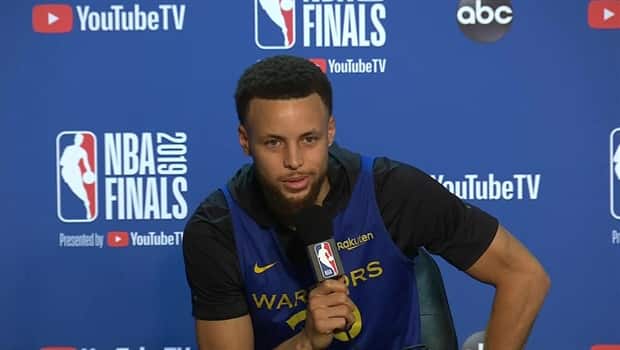 1 year ago
0:55
Warriors guard Steph Curry says it's best to handle it with class and ignore it. 0:55

"Being in the Finals five years in a row and being on this stage, it's hard to avoid those interactions with fans that want to . . . make their imprint on the series somehow, in some way, especially with social media these days," Curry said. "I think it's kind of stupid, to be honest, in terms of people camping outside our hotel just to yell expletives at either us or our family members or whatever the case is.

"But we handle all that stuff with class and try to ignore it the best we can. And if they get something out of it, so be it. But it doesn't affect us at all in terms of what we're trying to do and how we carry ourselves as a team as players and as people that represent us and our families as well."

Another fan in the video could be heard yelling: "You're the best Dell, don't even listen to these guys."

Stephen Curry lived in Toronto while his dad Dell played for the Raptors from 1999 to 2002.

Curry's wife Ayesha, who grew up in Markham, Ont., and is a celebrity cook, cookbook author and television personality, was the target of a vulgar comment following Game 2 of the series.

Police say 28-year-old Tristan Warkentin of Toronto, who turned himself in on Thursday, faces charges of mischief by interfering with the lawful operation of property.

Warkentin is accused of uttering what police call "profane phrases" in an interview with a TV reporter following the game.

The Render video is the latest in a handful of recent incidents that show that perhaps the Finals have taken an ugly tun. 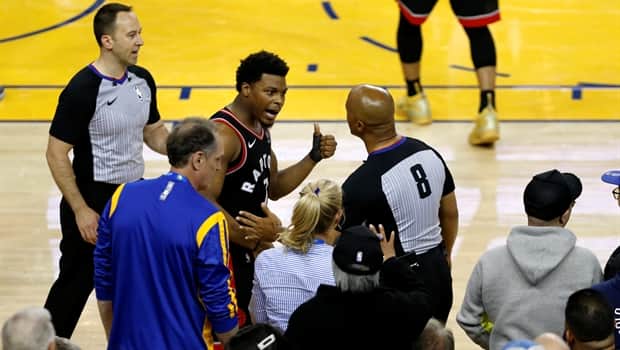 Raptors guard Kyle Lowry was shoved and sworn at by Golden State minority owner Mark Stevens during Game 3 at Oracle Arena. Stevens was fined $500,000 US and banned from games next season for the incident.

Then, when Warriors star Kevin Durant went down with what was eventually diagnosed as a ruptured achilles tendon during Game 5, a large number of fans at Scotiabank Arena initially cheered. Lowry and other Raptors players waved their arms to quiet the crowd, who then warmly applauded Durant as he was helped to the locker-room.

"We're sorry that some fans of Raptor Nation at the Scotiabank arena, Jurassic Park, and in some bars/restaurants showing the game, displayed an ugly side of fandom when they cheered on the injury of Kevin Durant," says the fundraiser on GoFundMe.

Curry said the cheers for Durant left him "confused."

"It's not my experience with the people of this city," said Curry. "I just hope that ugliness doesn't show itself again as we go forward in this series." 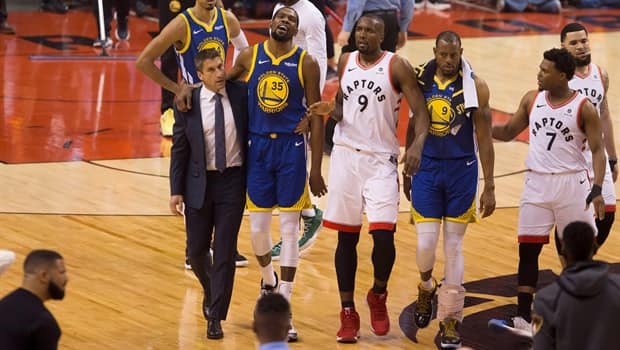 1 year ago
1:07
The Warriors' forward appeared to re-injure his right leg during the second quarter on Monday night. 1:07

A video of a couple of Golden State fans allegedly getting assaulted outside of Scotiabank Arena after Game 5 was circulated on social media. The clip shows two individuals wearing Warrior gear getting knocked over while crossing the street.

One of the individuals, in a Warriors jersey, gets up to confront his assailant but is sucker-punched in the face by another man in a black hoodie.

The ugly incidents have been a black mark on a Finals series that got off to a congenial start. Warriors coach Steve Kerr even complimented the kindness of Canadian fans after the series opener in Toronto.

"Frankly, it's fun to be in these environments, to be challenged, to be threatened, especially because the Canadian fans are so nice that even when they're harassing us, they do it in a very polite manner," he quipped.

In a segment on Jimmy Kimmel Live, Raptors fans were asked to trash talk the Warriors, but the responses were hilariously tame.