The professional sports schedule is expected to start getting busier on Friday after a string of postponements the past two days, but it won't be back to normal just yet.

Canucks to resume series against Vegas on Saturday; Raptors come back to court Sunday

The professional sports schedule is busier Friday after a string of postponements the past two days, but it won't be back to normal just yet.

The NBA announced Friday it will resume its playoffs on Saturday after three days without games in the aftermath of the police shooting of Jacob Blake, a Black man, in Kenosha, Wis., last weekend.

The NBA and the National Basketball Players Association made the announcement in a joint statement.

The Toronto Raptors will start their best-of-seven NBA Eastern Conference semifinal against the Boston Celtics on Sunday at 1 p.m. ET.

The NHL, meanwhile, will have a second straight day without games on Friday before it resumes its playoff schedule on Saturday with three games in Toronto and Edmonton.

The Boston Bruins and Tampa Bay Lightning kick things off Saturday at 12 p.m. ET with Game 4 of their Eastern Conference semifinal in Toronto. The New York Islanders and Philadelphia Flyers square off in Game 4 of their series on Saturday night in Toronto, and the Vancouver Canucks face the Vegas Golden Knights in Game 3 of their Western Conference semifinal in the final game of the night in Edmonton.

"It's about any type of social injustice and racism. But obviously hockey is close to our hearts and right now it's about supporting our fellow players and be there for them and supporting them," Bruins captain Patrice Bergeron said. "Within the hockey world we definitely want to accomplish some things, but then that also means to go broader than that and help in society as well and try to bring change."

"We all realize that nothing's going to be fixed by tomorrow morning, but this is a situation where everyone needs to continue to learn and ask questions and do what's right, be a good person in this world. Educate your kids and teach them and grow and show them the right way. It definitely is a long-term thing, but the whole point of the pause was to get everyone to sit back and listen and reflect." 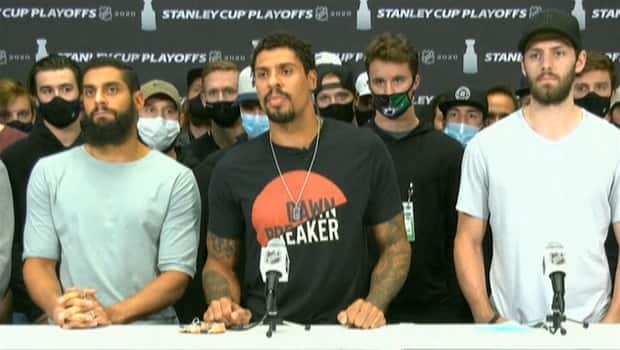 3 months agoVideo
2:47
In his daily recap, Rob Pizzo breaks down the last 24 hours that led to the NHL and NHLPA postponing their games. 2:47

The NBA and its players also agreed to resume after establishing a commitment to move forward in three areas.

The NBA and its players will form a social justice coalition; franchise governors will work with local elections officials to convert team-owned arenas into voting locations for the U.S. election in November; and the league will work with players and network partners to create advertising spots in each playoff game dedicated to promoting greater civic engagement and raising awareness around voter access.

The Raptors were one of at least four teams to cancel planned media sessions on Friday as they awaited clarity on the NBA's situation.

An emotional Chris Paul, the union president, detailed the events of the previous two days, when players upset by the latest police shooting of a Black man left them considering leaving the Disney campus and going home.

"We're all hurt, we're all tired of just seeing the same thing over and over again and everybody just expects us to be OK just because we get paid great money," Paul said. "We're human, we have real feelings and I'm glad that we got a chance to get in a room and talk with one another and not just cross paths and say good luck in your game today."

The Milwaukee Bucks triggered two days of cancellations by refusing to take the court Wednesday to protest social and racial injustice.

One of the leaders on a Seattle team that decided to sit out a game Wednesday to protest racial and social injustice, pitcher Taijuan Walker hopes the actions of the Mariners and other big-league clubs will help keep the conversation going.

"I think it was huge for all the teams just to send that message," he said Friday, a day after being traded to the Toronto Blue Jays. "Instead of just speaking words, we are going to take action."

The Blue Jays and Boston Red Sox sat out Thursday night's game in Buffalo, N.Y., with the game set to be made up in a doubleheader on Sept. 4.

"Moving forward it's just to continue to talk about it, to have those really tough conversations and learn," said Walker, who was wearing a Black Lives Matter T-shirt on a video call with reporters.

"And try to figure out a way to help, once you do learn and once you are educated."

Toronto was set to return to action Friday night against the visiting Baltimore Orioles. Walker, the lone African-American player on the Blue Jays, was tabbed to make his first start for Toronto on Saturday.

Walker is a member of the Players Alliance, a group of more than 100 current and former Black major leaguers working to combat racial injustice. Those players will be donating salary from Thursday and Friday in honour of Jackie Robinson Day.

It has been a whirlwind week for the 28-year-old native of Shreveport, La.

Walker, who lives in Paradise Valley, Ariz., said he has family in Louisiana — including his father in the coastal city of Lake Charles — who "lost everything," including property and belongings after Hurricane Laura lashed the state.

"It's pretty emotional for me and for them too," he said, his voice cracking.

All players, managers and coaches at Minute Maid Park were wearing No. 42, the jersey number Robinson wore when he broke the major league colour barrier in 1947.

The Athletics and Astros placed a No. 42 jersey in each batter's box and the players lined up for the moment of silence before walking into their respective clubhouses.

Tennis also returns after play was postponed Thursday. Canadian Milos Raonic is in semifinal action at the Western & Southern Open in New York.

Major League Soccer is resuming its season after several midweek matches were postponed when players decided not to play. The league said Friday that the move comes after a "period of reflection and conversation" with the group Black Players for Change, other league players and the MLS Players Association.

"It was really important for us as Black athletes to take the stand that we did on Wednesday to remind people that this needs to be a priority for us, especially within these league that have so many Black athletes," said D.C. United goalkeeper Earl Edwards Jr., a member of the executive board of Black Players For Change. "We need to prioritize our lives and do everything they can to to make sure our lives are being seen equally in this country."

A game in Montreal between the Impact and Toronto FC is scheduled for Friday night after five of the league's last six games were postponed on Wednesday.

The WNBA also resumes tonight with three games after postponing games the past two days at its bubble in Bradenton, Fla.

Kayla Alexander of Milton, Ont., and Bridget Carleton of Chatham, Ont., will play for the Minnesota Lynx against the Atlanta Dream in the first game on Friday night.