Hockey Night in Canada podcast: Keeper of the Stanley Cup

Catching up with the caretaker of sports' most recognizable trophy

It's the oldest and most recognizable trophy in all of professional sports and what every Canadian boy dreams of lifting over their head one day.

The Stanley Cup has seen and been through a lot since it was first awarded to the Montreal Hockey Club in 1893. If the Stanley Cup could talk, it would have some of the most interesting stories to tell.

Kris Draper's newborn daughter sat in the Cup and left a little surprise inside, it's been swimming in Mario Lemieux's pool and taken a shower with Steve Yzerman

The Cup has also had it's fair share of bumps and bruises. Rocket Richard dropped it in 1993. In 1994, a member of the NY Rangers ripped off its head. 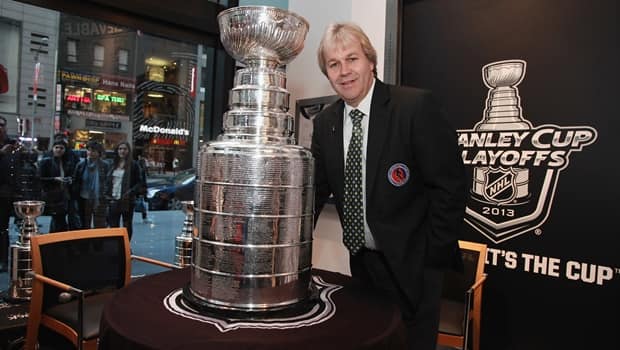 2 years ago
0:54
Hockey Night in Canada podcast: Keeper of the Cup talks celebrations 0:54

Because of this, the NHL brought on someone to take care of the Stanley Cup.

Lyle "Sparky" Kulchisky, who was the assistant equipment manager for the Oilers during their championship run in the 80's, also joins Pizzo. Kulchisky talks about an infamous story where the Stanley Cup came back in pieces following a night of revelling.

The Boston Bruins will face off against the St. Louis Blues in a rematch of the 1970 Stanley Cup final. But how they got here couldn't be more different. We set up the 2019 championship final.

Anya Battaglino and Sarah Nurse join the podcast to discuss the recent developments surrounding women's professional hockey in North America and the repercussions for the players involved.