Rock the house and become a wheelchair curling instant expert

Here's everything you need to know to instantly become a wheelchair curling expert as Canada competes at the Paralympic Games in Pyeongchang, South Korea.

Quick facts about the sport if you're hurrying hard

Wheelchair curling is a fairly recent addition to the Paralympic program, but the strategy and skill involved makes it one of the more compelling sports at the Winter Games.

Here's everything you need to know to instantly become a wheelchair curling expert as Canada competes at the Paralympics in Pyeongchang, South Korea:

How the event works

The rules of wheelchair curling are similar to the able-bodied version, with a few key differences. For example, there's no sweeping in wheelchair curling, putting a greater focus on accuracy and shot strategy.

Each team has four players and must be comprised of male and female athletes. Players throw two stones per end; games last eight ends, with additional ends played in the event of a tie after eight.

There's only one classification in wheelchair curling, as opposed to Paralympic sports like alpine skiing that have multiple events for athletes in different classifications.

Teams play each other once in the round robin, with the top four advancing to the semifinals; the semifinal winners meet for gold, while the losing rinks play for bronze.

Standard curling stones and sheets are used in wheelchair curling, but wheelchair lines are added to the ice surface to help the curlers position their stones.

Athletes curl from a stationary position with their feet off the ice and their wheelchairs locked. During delivery, a teammate will position themselves behind the shooter and hold on to their chair for added stability.

Competitors can use a delivery stick for sliding stones. The sticks have a bracket on the end that fits on top of the handle and assist with rotating the stone.

Canada has won every Paralympic curling gold since its inception in 2006, but the world's fourth-ranked rink faces stiff competition from Russia, China and Norway.

Three members of Canada's gold-winning rink from the Sochi Games — Mark Ideson, Ina Forrest and Dennis Thiessen — will compete in Pyeongchang, with Ideson taking over as skip and Forrest looking for her third consecutive Paralympic gold. 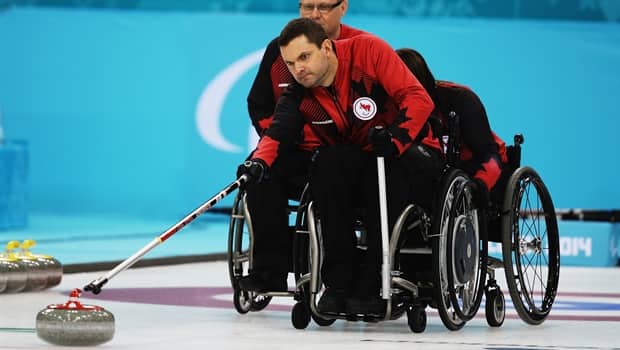 3 years ago
0:44
Canada's Mark Ideson took up wheelchair curling after a helicopter crash in 2007, and is now searching for more Paralympic success in Pyeongchang. 0:44

Here are the five members of Canada's wheelchair curling team: