Canadian wheelchair racer Brent Lakatos has one workout he loathes.

He wheels for an hour on rollers in his garage, maintaining a heart rate of 165. It's close enough to his maximum heart rate of 182 to be 60 minutes of pain. But it's the monotony he truly dislikes.

"If my heart rate goes a couple beats lower, I'll push a little bit faster. If it goes too high, I've got to slow down. It's horrible," Lakatos said, laughing. "The hard part isn't physical, it's the mental one. It's just so long and boring. I'm in a little bit of pain, but it's boring at the same time."

Lakatos is an 11-time world champion and seven-time Paralympic medallist — in sprint races. And so when the 40-year-old from Dorval, Que., was in the lead heading down the homestretch of the London Marathon on Sunday, BBC commentators wondered aloud if he'd have enough left in the tank to hold off the field.

Lakatos proved them wrong, pulling away for the victory. It was both a credit to the long hours of training, and a terrific gauge 10 months out from the 2021 Tokyo Paralympics. 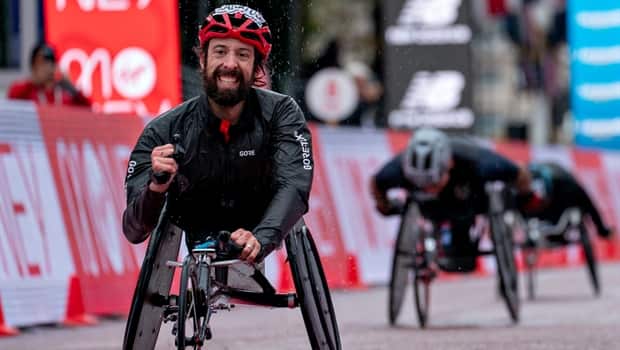 5 months ago
3:35
The wheelchair racer talks about ending a 10-year Canadian drought and the pivot to Tokyo. 3:35

"Which is why it's possible," he said. "Doesn't matter how much pain you're in when it's done."

Sunday's race, which featured a small, elite field and no fans permitted near the course due to COVID-19, was a chance to try out his new carbon fibre chair that he's been tinkering with for a couple of years with the help of a 3D designer. Aerodynamics is key. He even borrowed from ballet — toe shoes worn by ballerinas — to limit air drag from his feet.

It's tough to tell how much of a difference his new chair made Sunday.

Commentators were also puzzled that, unlike the other racers, Lakatos didn't wear a visor Sunday, considering the drizzling rain and wet road around St. James's Park in central London sprayed water up into his face for much of the 42.195 kilometres.

"I struggle with a visor, especially in the rain, just because the water gets on it," he said. "And it's kind of like looking through glasses when there's water on your glasses."

Lakatos took the lead for good with two laps to go, and with five racers on his tail crossed in one hour 36 minutes four seconds to become the first Canadian to win the event in a decade. 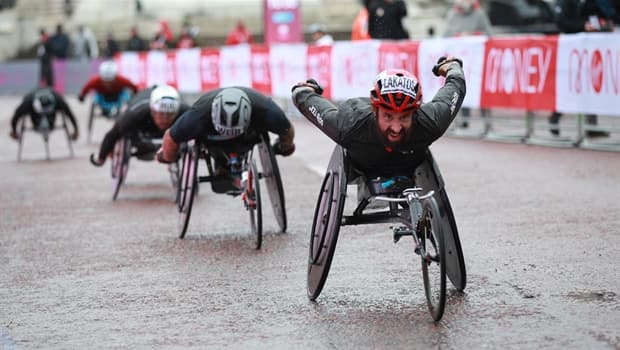 5 months ago
0:28
The Paralympic and World Para Athletic champion from Dorval, Que., added to his resume with a win in the wheelchair race at the 2020 London Marathon. 0:28

He also won three of the four sprint races that were built into Sunday's marathon. The fastest times over the four 500-metre sprints received personal prize money plus cash to be donated to a charity of their choice. Lakatos earned money for WheelPower, a UK sports program that aims to help people in wheelchairs improve their quality of life.

Lakatos lives in Loughborough, England, about 160 kilometres north of London, with his wife and Paralympian Stefanie Reid.

The 40th London Marathon was originally scheduled for April, but the global pandemic has wiped out virtually every live road race since March. Some 43,000 runners from 109 countries did virtual London Marathons on Sunday, raising money for cash-strapped charities.

The popularity of the virtual version was a big reason why organizers were able to hold Sunday's elite edition, where Canadian Tristan Woodfine ran the Tokyo Olympic qualifying standard in finishing 14th.

Runners and wheelchair racers completed just under 20 laps of a 2.15-kilometre course that looped past Buckingham Palace. With no spectators permitted, athletes were cheered by cardboard cut-outs of Queen Elizabeth II.

Lakatos was impressed with the lengths organizers went to ensure athlete safety.

"It might be a model that they can use in Tokyo next year, if necessary," Lakatos said. "Hopefully, it's not necessary." 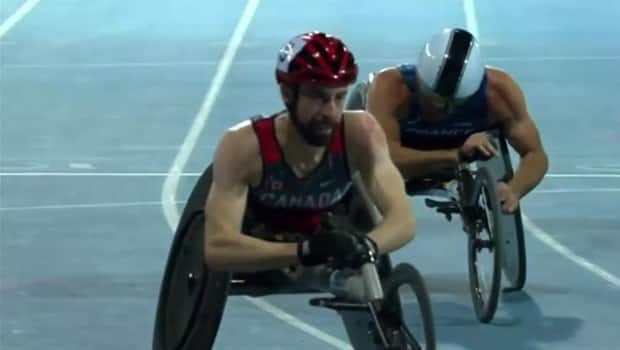 Athletes were tested for COVID-19 before they left home, once they arrived in London and again on Friday. They wore Bump technology around their necks which flashed blue if the wearer was within two metres of someone. It then flashed red and then beeped if the wearer was too close for too long, plus provided contact tracing if someone tested positive. None of the athletes did.

At the race venue, each athlete had his or her own space with dividers, plus their own portable toilet.

"I was really impressed … it's great to have a big event at the end of the season for us, as well as just the actual marathon itself, where they raised so much money for charity because charities have been really struggling," Lakatos said. "It was a great thing to be a part of."