The motorcycle accident that severely injured Olympic speed skater Denny Morrison in May 2015 could have contributed to his recent stroke, according to Dr. Michael Hill of the Calgary Stroke Program. 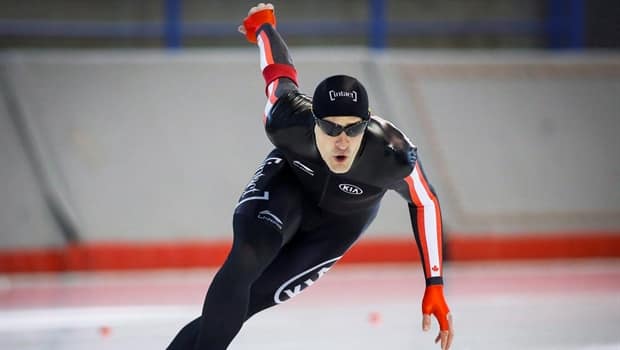 The motorcycle accident that severely injured Olympic speed skater Denny Morrison in May 2015 could have contributed to his recent stroke.

According to Dr. Michael Hill, the director of the stroke unit for the Calgary Stroke Program at Alberta Health Services, strokes can be a secondary result of trauma.

"If you get in a car accident or some kind of major trauma, then you can have a little tear in your carotid artery. That's entirely possible," Hill told CBCSports.ca. "But again, most commonly they are spontaneous. Some people have artery diseases that predispose them to these kinds of conditions."

Morrison suffered a stroke on Saturday while in Salt Lake City, Utah after biking over 1,200 kilometres on the Arizona Trail. Speed Skating Canada, through a press release, revealed that the results from a CT scan and MRI taken at Intermountain Medical Center in nearby Murray showed a blood clot in Morrison's brain and a carotid artery dissection.

Hill has not seen Morrison's medical history or imaging from his recent tests, but suggests there could be a link between Morrison's stroke and his motorcycle accident.

"Maybe he injured the artery at that time and in fact the carotid dissection is not new. It's healed and it's old and so he's had an injured artery for 11 months and he just happened to have a stroke now. That's possible I suppose," said Hill.

"Again, without seeing the imaging and without knowing the details, it would be hard to know that. But, sure, you could have trauma that causes injury. Absolutely."

Hill, who is not treating Morrison, talked about the prevalence and causes of strokes in people under 50.

"A stroke amongst young people is rather more common than it's generally perceived in the public. People think of stroke typically as a disease of older age, and it's true that the frequency of stroke rises as you age," said Hill, who estimates that 15 per cent of strokes occur in people under the age of 50.

"We do see a lot of strokes in young people. It could be that this young man is just a statistic in the sense that he's just one of the young people who have had a stroke."

Hill said there are multiple possible explanations for strokes in young people, including heart problems, arterial tears or pre-existing conditions such as premature hardening of the arteries known as atherosclerosis. While most common instances of carotid artery dissections are spontaneous, Hill said that a tear in the artery could be caused by trauma.

According to Patrick Godbout, communications and media relations manager at Speed Skating Canada, Morrison is still in the hospital in Utah and is being routinely attended to by doctors. Godbout says that Morrison won't be available to media until after he is released and evaluated by the organization's medical staff.

Morrison suffered a broken left femur, concussion, punctured a lung, tore an anterior cruciate ligament (ACL), fractured a bone near his spine, and bruised his liver and kidneys when his motorcycle hit a left-turning car on May 7, 2015 in Calgary. He skated in his first event since the accident in March, competing in the Canada Cup Olympic Oval Finale in Calgary.

While Morrison suffered a second major health issue in less than a year, other professional athletes have returned from similar health scares.

In January 2014, Pittsburgh Penguins defenceman Kris Letang suffered a stroke that sidelined him for 45 games. Letang's stroke may have been caused by a small hole in the wall of his heart, but he only required blood thinners to treat it and continues to play for the Penguins.

Former New England Patriots linebacker Tedy Bruschi had a stroke only a few weeks after helping the Patriots win their third Super Bowl in February of 2005. Bruschi also had a hole in his heart, but different than the one in Letang's case.

Bruschi had surgery to repair the hole and considered retiring. However, he returned partway through the following season and was named the NFL's comeback player of the year. Bruschi played four more seasons after his stroke and was inducted into the Patriots Hall of Fame in 2013.

Support for the Fort St. John, B.C., native over social media has come in droves.

<a href="https://twitter.com/Denny_Morrison">@Denny_Morrison</a> oh my goodness! sending you positive vibes my friend!!! xoxo

<a href="https://twitter.com/Denny_Morrison">@Denny_Morrison</a> get well soon, Denny! All the best from Norway!

Morrison's current status and projected recovery time are not known. The severity of strokes vary depending on each person, and treatment depends on the kind of stroke suffered.

Since Hill doesn't have access to Morrison, he could not give a complete diagnosis of the situation

"The real lesson here is that even in young people, stroke does occur," said Hill.