It was the third four-man win of the season for Kripps of Summerland, B.C. The Canadian sled also included Ryan Sommer of White Rock, B.C., Cameron Stones of Whitby, Ont., and Benjamin Coakwell of Saskatoon. 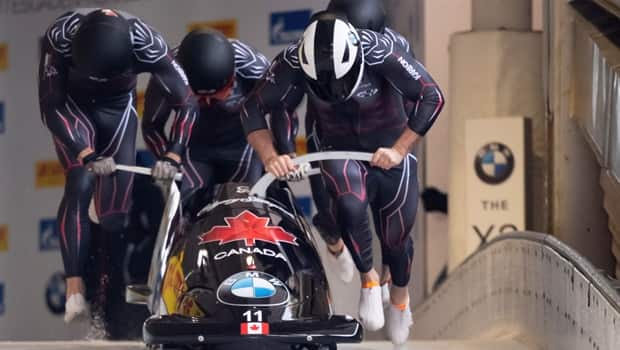 10 months agoVideo
2:22
The Canadian bobsleigh quartet raced to a combined time of 2:11.12 to claim their third gold medal of the season at the IBSF World Cup event in St.Moritz, Switzerland.  2:22

"This is awesome. I have been trying to win in St. Moritz since the first time I came here in 2007. That was a big day for us," Kripps said from St. Moritz, Switzerland. "We had two good runs, good pushes and the boys really stepped up in that second run to drop the start time. That was big time, and I really believe allowed us to get the victory."

But it was the first career four-man podium for the 32-year-old and his crew on the only non-refrigerated track in the world. The reigning Olympic two-man champion has never cracked the top 10 on the 1,700-metre chute of natural ice that winds its way to the finish line in the town of Celerina.

Francesco Friedrich's sixth-place finish in St. Moritz was enough to hang on and claim the Crystal Globe as the overall season standings champion for a second consecutive year.

The German amassed 1686 points over the 2019/20 season, 37 points ahead of teammate Lochner (1649). Kripps was third on the season with 1603 points, the best finish by a Canadian sled since Pierre Lueders finished second overall in the 2005-06 season.

The Canadians were in second spot after the first heat, but a fourth-place start time in the final run provided the velocity Kripps needed to finish on top.

"I had tweaked my groin, so I was pretty taped up and honestly was just hoping not to slow the sled down on the push," said Kripps. "I was feeling pretty good. Once I jumped in, I just wanted to fix any skids.

"Everything was going really well, hitting good lines, and when we came out of horseshoe we were really moving. On the finish straight away, I was thinking — 'there is no way anyone is going this fast. It has to be enough,' and it was."

It has been a stellar end to the World Cup four-man season for the Canadian team. After opening the season with back-to-back victories in the four-man sled in Lake Placid, Kripps also slid to the top of the four-man podium in Konigssee, Germany last weekend.

Kripp's crew was formed following the 2018 Games with Olympians Coakwell and Stones, who have both also been tapped to push the Canadian sled in two-man. Ryan Sommer joined the program last year and now has five four-man podiums. The team also won bronze at the 2019 World Championships on home ice in Whistler.