Canada's Mikael Kingsbury has moved into top spot on the World Cup moguls skiing victories list with his 29th career win on Saturday in Ruka, Finland. 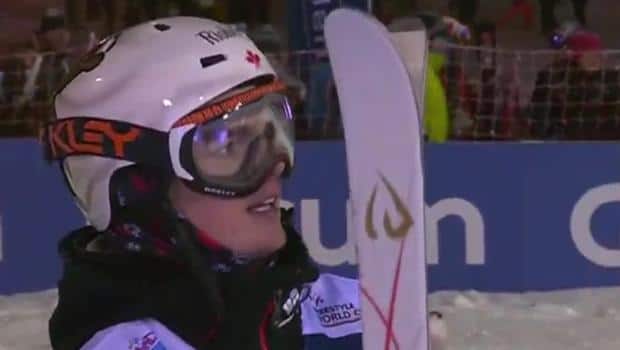 5 years ago
3:30
The Canadian finished first on Saturday at the men's dual moguls final in Ruka, Finland, setting a new record with his 29th career world cup win. Kingsbury defeated Benjamin Cavet of France 20-15 to capture the title. 3:30

The freestyle skier from Deux-Montagnes, Que., beat teammate Philippe Marquis of Quebec City 27-8 in the semifinal and then outscored Benjamin Cavet of France 20-15 in the dual moguls final.

Kingsbury had shared the previous mark with 1990s star Edgar Grospiron of France. Kingsbury had a chance to set the record last March in Megeve, France, but he fell in the quarter-finals.

"I just feel amazing. I woke up this morning and felt very confident and I knew that today was a good day to make it happen," he said post race in Ruka, Finland.

"Beating a legend like Edgar and being the best in my sport, it's something that I never thought I could do when I started my sport and now I'm here. Now I'm just going to put that record out as far as I can, and hopefully one day it will be untouchable."

The 23-year-old Canadian has won the World Cup moguls and overall freestyle titles the last four years in a row. He also won Olympic silver at the 2014 Sochi Games, finishing behind Alex Bilodeau of Rosemere, Que.

"For sure the Olympic gold is my main goal for my career," he said. "But right now I just want to enjoy this moment."