Canada's Dustin Cook won the men's super-G race on Thursday at the season-ending World Cup finals in Meribel, France, picking up his first career victory on the World Cup circuit. 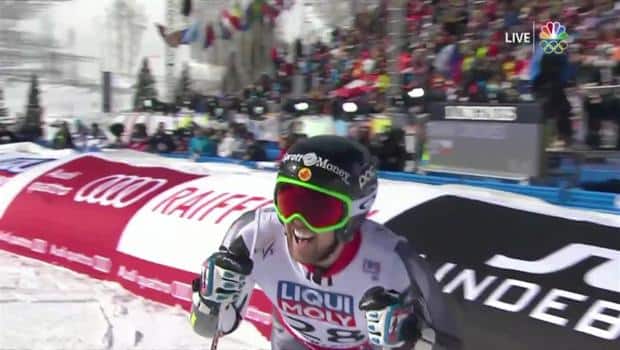 Canada's Dustin Cook won his first super-G race on Thursday at the season-ending World Cup finals in Meribel, France, and Kjetil Jansrud gained some ground on Marcel Hirscher in the fight for the overall title by finishing second.

Cook, a 26-year-old from Ottawa, finished .05 seconds ahead of Olympic super-G champion Jansrud. Roger Brice of France was .08 behind in third.

Jansrud has already won the season-long super-G title, and the 29-year-old Norwegian also took the downhill title on Wednesday.

Cook won silver in the super-G last month at the world championships, and had earned a first World Cup podium with a third-place finish in the discipline two weeks ago in Kvitfjell.

"I'm definitely not used to this, maybe someone like Kjetil who wins a lot, but this is all new and all exciting for me," Cook said. "I kind of came out of nowhere on the radar. It took a little longer than I expected but I'm just happy to here."

Cook had never placed higher than 12th prior to this season, and contemplated retirement.

"I was on the verge this summer of not skiing," he said. "But I just kept getting better and better and now I just want to compete for the podium every weekend."

Cook thanked one of his friends for snapping him out of his retirement thoughts.

"I still loved the sport it was just not going the way I wanted it to. So I had a good, long talk with one of my friends from home, and he was like 'Dude, don't even question it, just keep going,"' Cook said. "I talked to him about it recently and said 'Remember that conversation we had?' and he said 'Yeah, thank God you listened to me."'

Hirscher, a slalom specialist, finished fourth on Thursday for his second-best result in super-G and still leads the overall standings by 34 points heading into the final two races.

Jansrud has only six career podiums in giant slalom and his best finish in slalom — fourth place — was nearly 10 years ago.

"Marcel is grabbing a lot of points right now and he could already wrap it up on Saturday," Jansrud said. "But I'll just ski as fast as I can in the giant slalom and we'll see how it goes."

Austrian skier Matthias Mayer crashed near the bottom, and that delayed Jansrud, who was the next to start on the Roc de Fer course.

Although the soft snow and mild temperatures offered little difficulty to the skiers, Carlo Janka of Switzerland lost his balance, flew up in the air and went down on his backside with his left pole stuck up in the air.

Both he and Mayer got back up quickly and were unharmed.