Kim Boutin continued her dominant start to the short-track season by winning gold in the women's 1,000-metre at the ISU World Cup Saturday in Montreal.

Kim Boutin has the image of a small cartoon tortoise on her skate strap, an odd icon for one of the fastest speedskaters in the world. But it serves a purpose and seems to be working.

The speedy Boutin finished first in the women's 500-metre at the ISU short-track World Cup on Sunday for her fourth gold medal after just two events this season.

"What works for me is to stay calm," said Boutin, who won five individual medals in all of last year's World Cup season. "The tortoise on my skate reminds me to stay calm and to take control of every situation to make sure I have a good race." 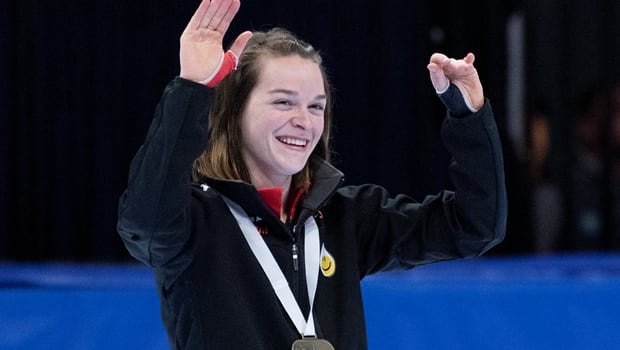 Why a tortoise and not a hare?

"The tortoise wins the race, no?," said Boutin, rhetorically.

The Sherbooke, Que., native is making a habit of winning.

The 24-year-old confidently led the 500 from start to finish and never appeared to be threatened as she crossed the finish line in 42.568 seconds — a new track record at Montreal's Maurice Richard Arena. 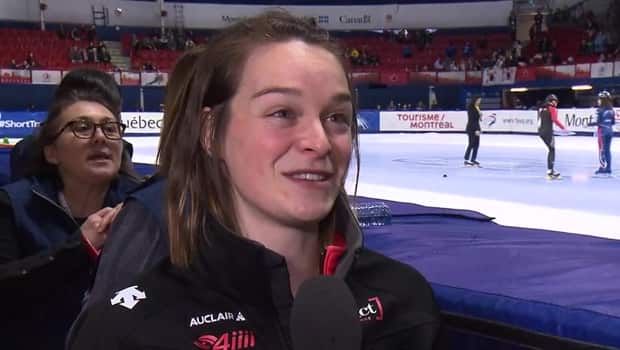 The first-place finish capped a perfect weekend for Boutin, who won gold in the 1,000 on Saturday. The three-time Olympic medallist also won gold in the 500 and 1,500 in the season-opening World Cup in Salt Lake City, Utah, last week.

"I didn't think this kind of start was possible," said Boutin. "I worked really hard during the summer. The work I put in with my coach is paying off."

Courtney Sarault of Moncton, N.B., a rising star in Canada's short-track outfit, took silver in the 1,000 though she looked destined for gold.

The 19-year-old led the race with four laps remaining, holding off Russia's Ekaterina Efremenkova before China's Han Yu Tong skated past her on the final half-lap. 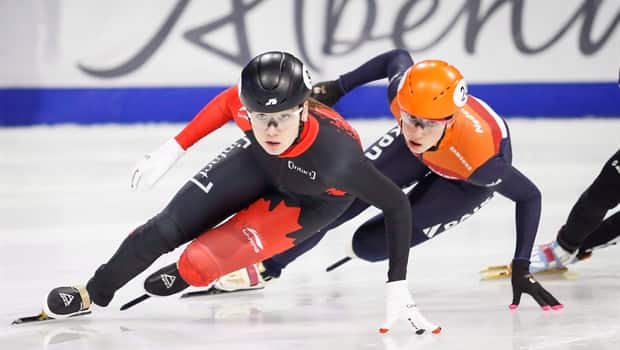 "I'm really satisfied with my silver medal but of course I'm always going for the gold," said Sarault, who earned one individual World Cup medal last season. "The silver was really nice but it motivates me to go and train and keep trying.

"I don't really know what's going on in my head when that last lap comes around. I was seeing her [Tong] on the outside and was trying my best. She's pretty strong. I gave all I had." 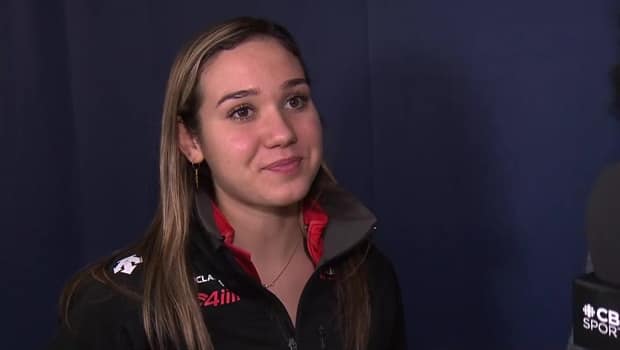 The Canadian men did not have the same success as the women, failing to reach a final in front of the hometown crowd.

Steven Dubois of Lachenaie, Que., was disqualified in the 500 semifinal for an improper lane change on the very first lap. The 22-year-old chose to be aggressive from the starting gun but the strategy backfired.

"I thought I had a good chance to pass the Russian but my first few steps betrayed me," said Dubois, who won silver in the men's 1,000 on Saturday. "I still went for it. In the end, I should have been more patient and waited until the end of the race."

It was another short day for veteran speedskater Charles Hamelin, who did not advance past the men's 1,000 quarter-final in his only race of the afternoon.

The 35-year-old Hamelin finished second in a photo finish ahead of Korea's Kim Dong Wook but race officials handed the Ste-Julie, Que., native an arm block penalty at the finish.

"I don't think that was the right call," said Hamelin, the five-time Olympic medallist. "The referee didn't see it correctly. That's a shared responsibility. My arm was there, yes, but his arm was on my thigh. When both skaters are at fault, you're supposed to ignore the penalty.

"Honestly it sucks. I wanted to get as far as possible today. I had the right energy to make the final and earn a podium spot."

Hamelin fell in Saturday's 1,500 semifinal after stepping on a block.