For a so-called "hermit kingdom," North Korea has enjoyed surprising success at the Olympics. And thanks to a thaw in relations with South Korea, the enigmatic state plans to send athletes to the Winter Games in Pyeongchang.

For a so-called "hermit kingdom" that is seemingly preoccupied with flexing its military muscle rather than showcasing its athletic prowess, North Korea has enjoyed surprising success at the Olympic Games.

The country of 25 million people has won 56 medals since it began sending teams to the Olympics back in 1964. Fifty-four of those came in the summer as North Korea's winter participation has been sporadic — it has sent athletes to only seven of the last 12 Winter Games, most recently in 2010 in Vancouver.

"Given their population, their per capita medal count is impressive by any measure," says Sergey Radchenko, a Global Fellow at the Woodrow Wilson Centre for International Scholars in Washington, D.C., who has studied North Korea's role in the Olympics.

"In terms of their infrastructure and preparedness, they are actually quite good and they do better than many other countries in the world of a similar size."

North Korea is expected to participate in the upcoming Winter Olympics in Pyeongchang, South Korea. Not long ago, this seemed unthinkable as tensions on the Korean peninsula appeared to be boiling over.

North Korea has defied international sanctions and protocols by expanding its missile program, including claims it can now reach the United States mainland with missiles potentially armed with nuclear weapons. Meanwhile, the leaders of those two nations, U.S. President Donald Trump and North Korean dictator Kim Jong-un, traded increasingly personal insults, with each side threatening to destroy the other.

Because of looming security concerns, some countries, including France, threatened to keep their athletes home from Pyeongchang.

But North Korea and South Korea revealed recently that they are now speaking to each other again for the first since 2015, and some of the discussion has turned to how to accommodate athletes from the isolated North at the Olympics.

The countries paraded under a unified flag at the opening ceremony of the 2000 Sydney Olympics, the 2004 Athens Games and, most recently, the 2006 Winter Olympics in Turin, Italy.

"Every Olympic Games offers an opportunity for North and South Korea to present themselves as champions of peace and unity," Radchenko says. "So they try to do this to appear reasonable, to engage with the other side."

The recent thaw in relations is a far cry from what happened the last time South Korea hosted the Olympics.

In the years leading up to the 1988 Summer Games in Seoul, there was an active effort made to accommodate the North. During talks brokered by the International Olympic Committee, an offer was made to the North Koreans to host a number of events, but they didn't feel they were being offered enough and chose instead to boycott the Games.

North Korea then actively tried to dissuade other nations from participating. These efforts culminated violently on November 29, 1987 when a bomb, planted by North Korean agents, detonated aboard an international passenger flight between Baghdad and Seoul, killing all 115 people on the plane.

Right now it appears the North Korean delegation will be small. Plans are to include a number of officials and a cheering squad, but only two North Korean athletes have qualified for the Olympics — the pairs figure skating duo of Ryom Tae-ok and Kim Ju-sik. They qualified at an event in Germany last September and are expected to be allowed to compete even though North Korean officials missed the deadline to file the necessary paperwork.

"It's very exciting," says Canadian coach Bruno Marcotte, who worked with the skaters for eight weeks in Montreal last summer. "It was a privilege to work with them... they are such great people and they deserve to be there because they are actually great skaters."

Marcotte told the CBC that the athletes didn't talk a lot about politics or life in their country and were instead focused on becoming better skaters. The coach was impressed with their work ethic.

"It's a lot of the Chinese way of training," Marcotte says. "A lot of the athletes are staying away from their families. I think they are in touch with their families but it's just so they can be 100 per cent focused on their skating."

Ryom and Kim finished 15th at last year's world championships and Marcotte predicts an improvement at the Olympics. He also thinks the pair will become fan favourites at the Games.

Whether they'll be joined by other North Korean athletes in Pyeongchang is unclear. Officials said Monday that North and South Korea want to field a joint women's hockey team, but the move still requires IOC approval. 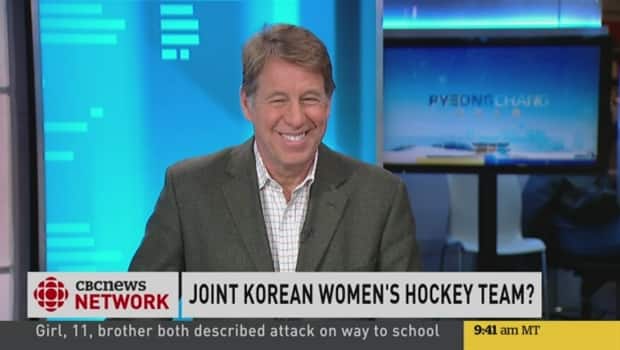 "It's what the Olympics are supposed to be about"

Besides the two figure skaters, no other North Koreans have met official qualifying standards, but the IOC could decide to grant special exemptions. The IOC has set a joint meeting with North and South Korean officials for this week to discuss exactly how the North Koreans will participate in the Games, including questions relating to things like anthems and flags.

As with many things related to North Korea, not much is known about who could potentially represent the country on the Olympic stage. At the 2017 Asian Winter Games in Japan, North Korea sent five male short track speed skaters and the aforementioned figure skating pair.

While North Korea has enjoyed considerable success in the Summer Olympics — most recently winning seven medals, including two gold, in Rio — it has not done as well in the cold. The country's only two Winter Olympic medals have both come in women's speed skating. There was a long track silver in 1964 and another silver in short track in 1992.

A medal of any colour for North Korea at this year's Games is highly unlikely. But if it does happen, it will be highly publicized and celebrated.

"Any sort of victory will obviously be blown out of proportion in North Korea to give greater legitimacy to the government, to show that North Korea is strong and can perform well in international competition," Radchenko says.

In the past, medal winners have been rewarded with luxury apartments. Others aren't always treated as well. Various media reports say losing athletes have been moved to lesser housing or have seen their food rations reduced. Or worse. In 2010, members of the North Korean men's soccer team, who lost to Portugal 7-0 at the World Cup, were reportedly sent to work in coal mines upon their return.

Still, having the North Koreans participate in the Olympics, even in a small way, is encouraging. Better to have them close than menacing from a distance.