Canada claimed the bronze medal at the women's world hockey championship with a 7-0 win over Russia on Sunday in Espoo, Finland. The Finns play for gold at 1 p.m. ET against the defending champion United States.

Loren Gabel paces attack in 7-0 rout of Russia with her 5th, 6th goals of tourney

The Canadians heard 'O Canada' after their final game of the women's world hockey championship, yet nobody standing on the blue-line was smiling.

Bronze medals hung around their necks after a 7-0 spanking of Russia on Sunday.

Canada was still coming to grips with not playing in the final for the first time in tournament history.

"Mentally, probably the toughest game that most of us have ever played in I think," captain Brianne Jenner said from Espoo, Finland. "We did what we had to do to make sure we left this tournament with a medal.

"Once the game was over, it was a bit of that disappointment still. It's going to be a tough one for us to get over." 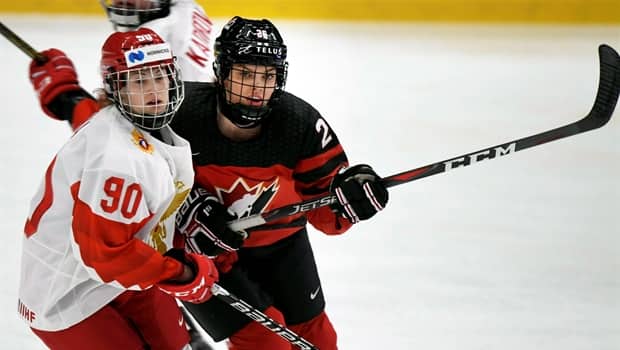 2 years ago
0:27
Canada dominates Russia 7-0 in the bronze medal game at the women's world hockey championship. 0:27

A 4-2 semifinal loss to Finland on Saturday sent the host country to Sunday's gold-medal game against the United States.

It's International Ice Hockey Federation custom to play the winning team's anthem after every game. The last time it played for Canadian women after a gold-medal game was in 2012.

Canada controlled Sunday's game from the outset and outshot the Russians 41-6.

Poulin, Turnbull sit out with injuries

Down to 11 forwards because of injuries to Marie-Philip Poulin and Blayre Turnbull, defender Laura Fortino played shifts at forward until she too was injured in the third period and couldn't finish the game.

"We now have what I would call a legitimate natural goal-scorer," Pearn said.

The motto "We Are Accountable" was posted on Canada's dressing-room wall during the tournament.

"Coming off such a low [Saturday], we really had to find energy today and bring that," Spooner said. "I think in the game we did a lot of good things and we brought that energy.

"It's nice to be going home with a medal. It's just not the medal we wanted."

Canada's blue-collar game crystallized in a 6-1 win over Finland to cap the group stage and also 5-0 victory over Germany in the quarter-final.

The Canadians scored driving the net and paying a physical price around it. But they backed off that approach in the semifinal and found themselves chasing an inspired team.

What I'd love to do is coach this group full time for a year and be able to make the changes [necessary to play in a gold-medal game].— Canada head coach Perry Pearn

Special teams went cold and Finland's shots from the point were not blocked.

Pearn, an assistant coach in the NHL for 21 years, stepped behind Canada's bench prior to this season. His one-year contract over, he was unsure about his future with the team.

"At times in this tournament, I think we played extremely well to the point where we could challenge the U.S. in a gold-medal game, if we do the things we have to do," Pearn said. "What I'd love to do is coach this group full time for a year and be able to make the changes.

"No changes are made easily, but I think in a way there are a lot of things to be done in a short period of time if you can work with them every day. The hardest part is working from event to event. That's the essence of where the Canadian women's game is right now. You have to accept that as a coach."

The absence of big-game goal-scorer Poulin for all but one period of the tournament was, as one former international coach put it, like trying to play chess without a queen.

Poulin reinjured a problematic left knee in Canada's third game of the tournament.

She and Ann-Sophie Bettez, making her world championship debut at age 31, weren't able to test the offensive chemistry they had as linemates on their club team.

Thoughts on hockey future pushed aside

Turnbull didn't play Sunday after she was pushed head-first into the boards by a Finnish defender in the semifinal.

Of the 10 countries in this year's tournament, Canada's roster was impacted the most when the players learned upon arrival that the Canadian Women's Hockey League was folding.

Eighteen of Canada's 23 players had to push aside concerns about were they will play next season.

"We did a really good job of parking it," Ambrose said. "It wasn't discussed at all during the tournament."

The players face an uncertain off-season, but vow to form a united front to get the league they want.

"Hopefully it can happen quick that we can get somewhere to play, but it's definitely going to be a process, and I think all the players are united in that," Spooner said. "I think if we're all united, then we're going to get what we want and what we deserve."

Canada will be the host team at the 2020 world championship in Halifax and Truro, N.S.