Scott Russell reflects on Quebec's consistent love affair with freestyle skiing, even when directly competing with the NHL's Montreal Canadiens and the MLB's Montreal Expos. 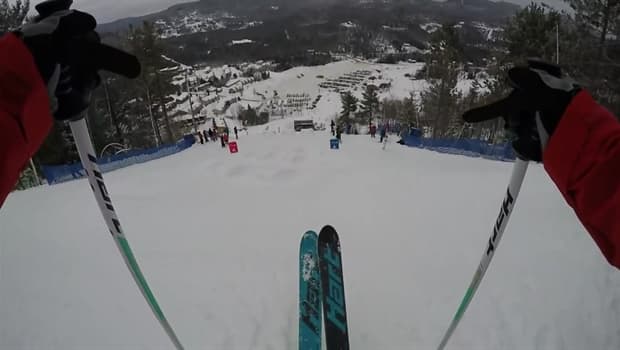 4 years ago
2:30
See the slopes from the point of view of Canadian freestyle skier Phil Marquis 2:30

I can distinctly remember, when working at CBC Montreal, that beyond the hockey Canadiens and Major League Baseball Expos we covered freestyle skiing more than anything else.

At that time in the late 1980s there was a group of athletes known as "The Quebec Air Force" who captured the province's imagination because of their high-flying wizardry and dominance of the World Cup podium wherever they travelled internationally.

They weren't the Crazy Canucks who streaked to fame in alpine speed races in the European heartland. Instead, they were aerialists and mogul magicians executing seemingly impossible tricks in the stratosphere while navigating mine fields of bumps or flinging themselves off homemade kickers in front of wildly devoted fans.

There were the Laroche brothers, Yves, Alain and Phillippe as well as Lloyd Langlois, Jean-Marc Rozon, and Nicolas Fontaine on the aerial side.  All of them were, at one time or another, the best in the world.

We know all about Olympic champions Jean-Luc Brassard, Alexandre Bilodeau and Justine Dufour-Lapointe who have ruled the moguls along with the next great one, Mikael Kingsbury. 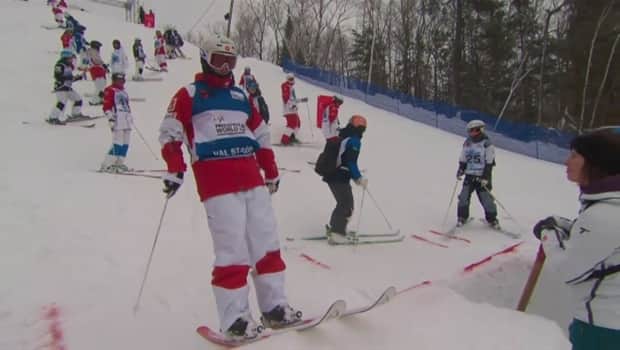 Reading between the lines with Mikaël Kingsbury

4 years ago
1:20
The mogul and dual moguls world champion allowed CBC Sports to join him on his hill inspection ahead of Saturday's World Cup event in Val Saint-Come, Quebec 1:20

'Better learn to ski on ice'

But don't forget that Olympic champion Jenn Heil migrated from her Alberta home to Quebec to work with her then-coach and now life partner Dominik Gauthier. And before the likes of Gauthier there was the original innovator, Michel Daigle, a founding member of the Quebec Air Force in the mid 1970s who was the first to run freestyle camps in Canada as well as building water ramps for summer practice in the Laurentians just north of Montreal.

The bottom line is French-speaking Quebecers adore freestyle skiing and have produced a significant number of this winter discipline's stars.

"Skiing in Quebec gets boring quickly," says Gauthier who recently relocated to B.C. with Heil and their young children.  "So you better learn to jump and to ski on ice, which are two critical elements needed to become a successful freestyler. I won my first World Cup medal in 1993 and there was only one skier who was not speaking French in the final of 12."

Gauthier also points to the fact that Quebec resisted the trend to free skiing which took off in the new millennium. The new Canadian school of snow skiing had athletes looking towards more creativity and less formality.

"Everywhere in the rest of Canada it was not cool to compete and do moguls anymore," Gauthier recalls. "But in Quebec the program remained strong and it was always cool to be the best and compete in a structured environment."

The existence of folk heroes has also contributed to the continued longevity of freestyle skiing in the province.  Generations of skiers have now looked up to a succession of champions.

"It has become a cultural thing in this province since the Laroche family era," says back-to-back Olympic moguls champion Alexandre Bilodeau. "I watched Jean-Luc Brassard in 1994 when he won Olympic gold. Before that I was a normal skier in weekend classes who was always leaving his group to ski in the out of bounds areas.  After watching Jean-Luc I asked my mom if I could get into the freestyle club. This was the start of a love story for me."

'Such a complex sport'

"Our freestyle skiers have always had a major place in the media compared to the rest of Canada," notes Gauthier.  "The Quebec team can be so proud that they worked hard against the current after 2000 to stay on top and focus on a few rather than trying to appeal to the masses. I believe this has always had an impact because our best skiers were well known and the younger ones wanted to be like them."

Bilodeau agrees while at the same time pointing to the affection Quebecers seem to have for the craft of traditional, freestyle, skiing. It is a craft where they have been both innovators and pioneers.

"I instantly got deeply passionate about this fascinating sport," he muses. "Such a complex sport that requires so many types of skill sets. I fell in love with the sport but also with everybody who is practicing it.  I think there is not one person I knew throughout my career that wasn't passionate about it."

The lineage of freestyle skiing in Quebec is stronger than ever.  The Dufour-Lapointe sisters and Kingsbury have gained celebrity status just as Brassard and Bilodeau before them. And champions breed champions because there's something to live up to.  This applies not only to performance but to a sense of tradition.

'Freestyle skiing is an endless spiral'

"We made sure we inspired the next ones and made them believe it was possible," stresses Gauthier.  "We made it clear that we developed an attitude which said, if you are not serious and do not wish to train hard then sorry…this is not the place for you."

"I think freestyle skiing is an endless spiral here in Quebec," Bilodeau offers.  "It starts with a bunch of passionate people that are so passionate that they become great coaches if they can no longer pursue excellence on their own.  These coaches then create amazing athletes who become idols and role models for other kids who now have hopes of their own in the sport."

Freestyle skiing and the province of Quebec are still entwined in a sporting romance.  It's true there are other suitors, Big Air and snowboarding and all the rest.

Then again, after so many years and so much success, if the passion for moguls and aerials still burns bright then it will be awfully hard to break this love affair off.