Canada's Mikael Kingsbury won his second straight men's World Cup moguls race and the 60th of his career on Saturday in Calgary.

Canadian reaches top of podium at event in Calgary

He parlayed that self-assurance into a 60th career World Cup victory Saturday.

The reigning Olympic and world men's champion from Deux-Montagnes, Que., collected his ninth win at WinSport's Canada Olympic Park in the last decade.

"Calgary magic," Kingsbury said. "It's probably something in the water that works for me here."

"I always manage to pull it out at the right moment here. I like performing in Calgary. I like that course with the little pitch change. It helps my style of skiing. I know how to compete well here."

The only freestyle skier with more career World Cup victories is Conny Kissling, a Swiss woman who earned 106 between 1981 and 1992 across various disciplines including moguls.

Kingsbury posted the fastest time and earned the highest marks from judges for his air elements and his skiing technique for his 89.09 score. 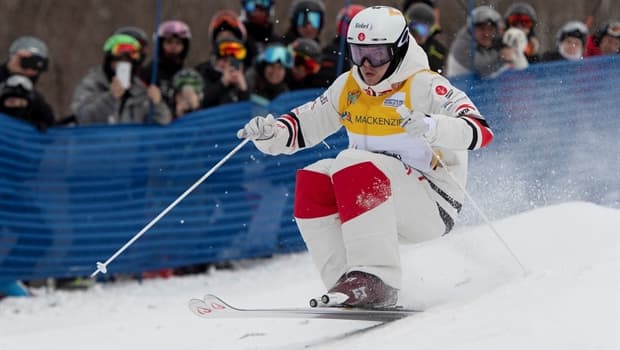 1 year ago
2:39
Canada's Mikael Kingsbury wins his second straight men's World Cup moguls race and the 60th of his career on Saturday. 2:39

With girlfriend Laurence Mongeon there to celebrate his win with him, the 27-year-old sprayed champagne from the top of the podium.

The stuff going on Saturday was a spot of wild weather that moved in midway through men's final that precedes the six-skier super final.

Rain turned to snow and a blast of high wind at the top of the Fitz's Freefall course sent fencing and banners flying. The event was paused for several minutes to replace the fencing.

"I was in touch with the people at the bottom, my coaches," Kingsbury said. "Big thanks to [teammate] Laurent Dumais who let me know after his run how the course was.

"He told me 'it's basically like training so you can go for it."'

Walter Wallberg of Sweden placed second with a score of 85.10, ahead of Dmitriy Reikherd of Kazakhstan with 84.19. Quebec City's Dumais placed 10th.

Perrine Laffont of France scored 81.22 in the women's super final to stay unbeaten this season with a fifth win.

Yuliya Galysheva of Kazakhstan was second with 80.89. 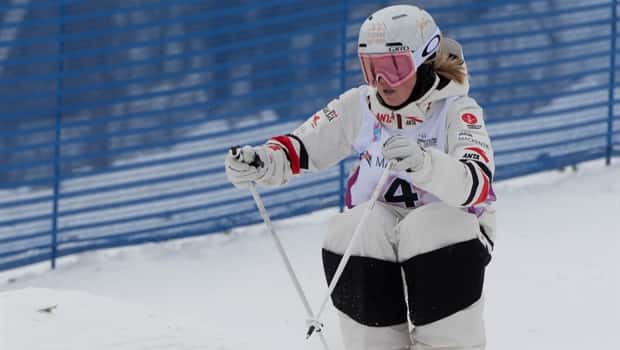 "This result means so much," she said. "I learned a lot about what I need to work on. I was more excited and disciplined to do those tricks even though it's hard and even though I'm scared as hell.

"Sometimes I don't want to do it, but if I push myself those results will happen. I'm really proud and happy about my skiing today. It was really a hard course."

Kingsbury padded his lead atop the men's World Cup standings to 480 points ahead of Japan's Ikuma Horishima with 365.

The Canadian and the Japanese have been duking it out for the top of the podium this winter.

Horishima was fifth Saturday marking the first time this season he finished outside the top two.

"It's a super-friendly rivalry," Kingsbury said. "He's the guy that's pushing me the most right now. He's super-consistent. He's hard to beat.

"We're doing a lot of similar stuff in our skiing and jumping. I help him, he helps me and we're pushing the sport to another level."