Canada's Dufour-Lapointe sisters completed an unprecedented World Cup freestyle moguls sweep Saturday when they all reached the podium at the event in Val Saint-Come, Que. 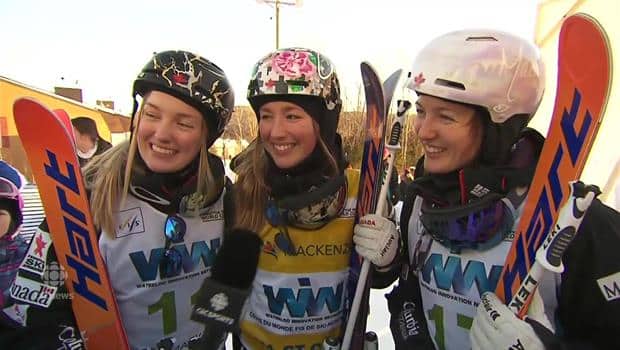 Dufour-Lapointe sisters on their podium sweep

5 years ago
1:56
The Dufour-Lapointe sisters made history Saturday, becoming the first trio of Canadian women to sweep a freestyle skiing moguls World Cup. Montrealers Justine Dufour-Lapointe finished first with a score of 86.49 in the super final while sisters Chloe (85.09) and Maxime (80.76) placed second and third, respectively. 1:56

Canadian women had never swept the podium of a freestyle skiing World Cup until the Dufour-Lapointe sisters from Montreal accomplished the feat.

Justine Dufour-Lapointe finished in first place, followed by her sisters Chloé and Maxime in second and third place, respectively.

"I think the podium sweep probably crossed our mind at least a couple times throughout the day," said Justine Dufour-Lapointe.

"But we stayed focused and followed the plan we had built with our team. It takes really great runs to do this and it's definitely not an easy thing to achieve … We felt like the entire country was behind us cheering us on and watching history."

"I was really excited about my performance and about how the season has started so far," she said.

"My sisters and I have the same goals. We all want the Crystal Globe so we push each other to be better. Having the yellow bib is always special. Today was just such a great day and I am proud of us. We need to soak this in and build from it."

The Canadian men grabbed two podium spots, including first place for Mikaël Kingsbury of Deux-Montagnes, Que. It was his record 30th win on the World Cup tour.

Quebec City's Laurent Dumais had a breakout performance to finish in third place.

"The crowd played a big part in motivating me and the team today," Kingsbury said.

"That's why we love competing in Quebec and in Canada in general. Laurent helped push me too. I knew he was going to be on the podium and I really wanted to share that with him."

"This is very special to me because it's my favourite location to ski," said Dumais. "I've done well here in the past. This is an incredibly special moment for me because I have my family and friends here as well. So many people came to see me compete and support the team. The crowd was amazing and provided me with so much energy."

With files from the Canadian Freestyle Ski Association