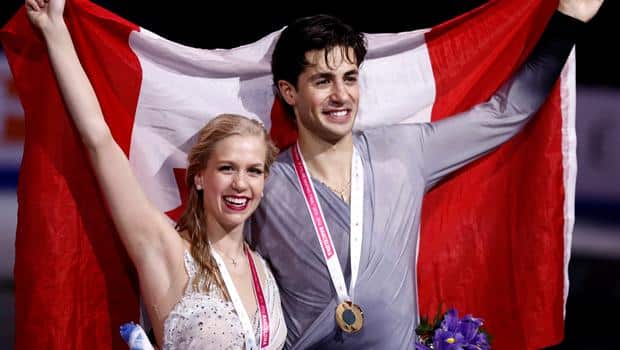 5 years ago
8:00
Canada's Kaitlyn Weaver and Andrew Poje set a seasons best in the ice dance, claiming gold at the ISU Grand Prix in Barcelona. 8:00

​Kaitlyn Weaver and Andrew Poje successfully defended their ice dance title at the Grand Prix Final on Saturday in Barcelona.

The Canadian couple from Waterloo, Ont., earned a season-best 109.91 points from a free dance to "On the Nature of Daylight" by Max Richter, and "Run" by Ludovico Einaudi.

"Today we skated with our hearts," Weaver said. "That was our goal, we were connected, and that is the best zone for us to be in."

Their winning total of 182.66 points left Madison Chock and Evan Bates of the United States runners-up with 177.55 for the second straight year in Barcelona.

Bates said they fell short again because they "changed about 50 per cent" of their free skate routine in the last month.

"We have never faced that challenge before," Bates said. "(But) it will push us to match the intensity of the music and help us grow as a couple."

Italians Anna Cappellini and Luca Lanotte were third with 176.37.

It was the sixth straight victory for Weaver and Poje on the circuit over the past two seasons.

"We felt great about the performance today," said Poje. 'We improved upon our other Grand Prix showings this season. We didn't perfect everything we wanted to, so there is still work to be done."

Skating on the same rink in Barcelona, this year's junior world champion coasted through her routine to Rene Aubry's "Allegro" before receiving a shower of flowers from the cheering crowd.

"I didn't really expect this result here, but I worked really hard for it," Medvedeva said through a translator. "I am very pleased with my first senior season and that I got to the Grand Prix Final. The main difference [this year] is the huge ovation I got from the crowd. It was great to give that kind of happiness with my skating."

Synchronized skating made its debut at the Grand Prix Final and world champions Nexxice from Burlington, Ont., won the bronze medal with 120.34 points. Team Paradise from Russia took the gold at 131.09 and Team Rockettes from Finland won silver at 127.66.