Japan's Yuzuru Hanyu produced a remarkable comeback to win the men's world figure skating title Saturday in Helsinki, a key boost to his hopes of retaining his Olympic gold next year. Canada's Patrick Chan, third before the free skate, finished off the podium in fifth. 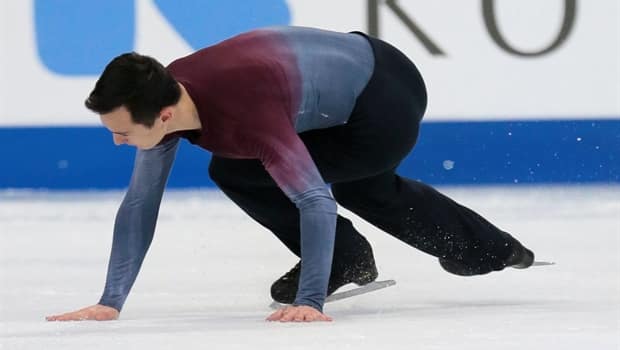 4 years agoVideo
8:05
The Canadian finished with a total score of 295.16 on Saturday at the world figure skating championships in Finland. 8:05

Canada's Patrick Chan laid down one of the finest performances of his comeback on Saturday.

But the three-time world champion, who has talked all season about playing catchup to an audacious field of high flyers, remains a step behind.

The 26-year-old from Toronto finished fifth at the world figure skating championships on Saturday, dropping two spots after the free skate despite landing three quadruple jumps.

It's the identical finish to last year's world championships in Boston, but in the moments after his skate, he spoke about embracing a different outlook on his skating this season.

"Emotionally it's very different," said Chan. "I was very upset last year because I had set myself up for failure. I put a lot a pressure to prove something to other people, as opposed to proving to myself. 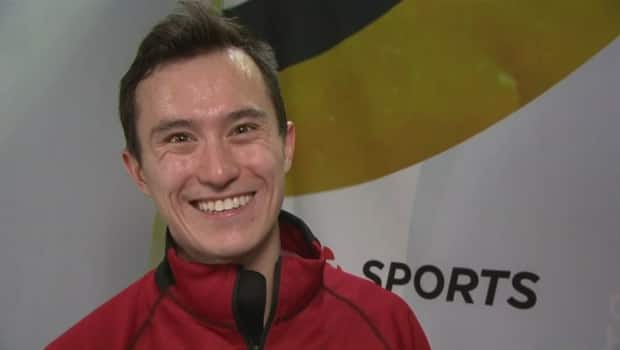 Patrick Chan's all about 'challenging himself'

"My approach today was to forget everything that's going on around me, forget how Yuzu [Hanyu] skated or anybody else before me and just put out what I can put out. And I got off the ice with a smile. . . this is a process for next year, leading up to the Olympics. I'm just trying to stay ahead of my game, or my own challenges."

Skating to "A Journey," a piece of music written by Canadian men's skater Eric Radford, Chan opened with a quad toe loop-triple toe loop combination, then reeled off a huge quad Salchow, which he added to his repertoire this season. He bobbled the landing of his third quad, a toe loop, but it marked the first time he'd rotated three quads in competition without a fall. 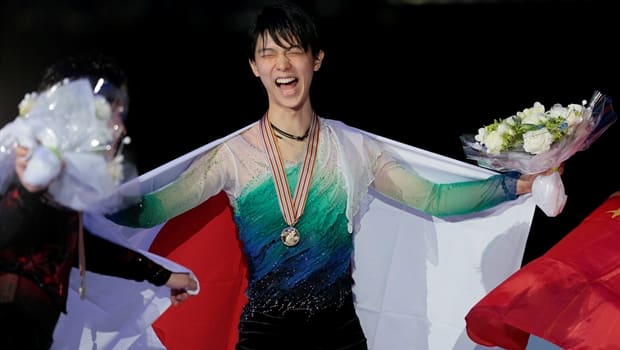 Japan's Olympic gold medallist Yuzuru Hanyu roared back from fifth place after the short program to post a world-record free skate score of 223.30. His total of 321.59 earned him gold.

"After the short program, I was quite depressed. I was so deeply depressed," said Hanyu, who wiped away tears after his score was announced. "But the fans and the team believed in me." 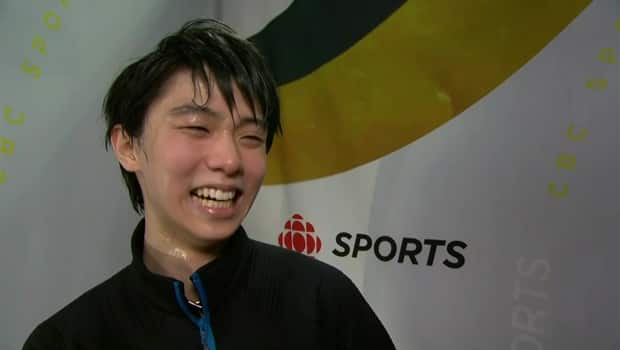 "Hard work' pays off for Yuzuru Hanyu in Finland 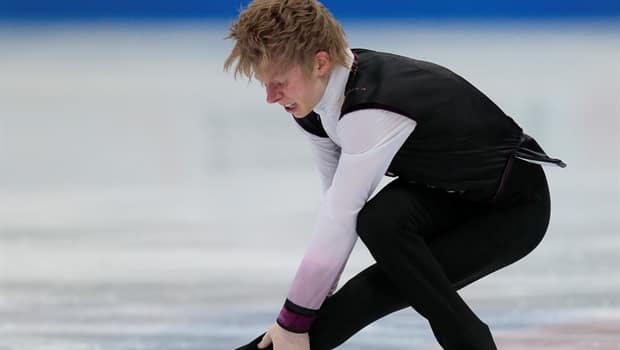 4 years agoVideo
8:19
The Canadian finished with a total score of 253.84, setting a new career personal best on Saturday at the world figure skating championships. 8:19

Chan took a year-and-a-half hiatus after his heartbreaking silver medal at the Sochi Olympics, and returned to find the landscape of men's figure skating completely changed, with a greater emphasis on the quadruple jump than ever before.

Two days earlier, Chan had skated his way into the top three in the short program with his superb all-around skills and artistry. But he knows changes are needed if he's to reach the Olympic podium again. He'll do some "number-crunching" before deciding to add a fourth quad to his long program.

He plans to increase the quads in his short program from one to two, and could experiment with that at the World Team Trophy later this month in Tokyo.

"Fourth quad in the long? I don't know," Chan said. "It's a toss-up. . . I don't know what happens if I had a fourth quad. I'm not like some of these guys who just roll out of bed and do it. I have to be a little more methodical. That's just the type of athlete I am, my build, my genetics, I just need to be smart. I can't let myself get carried away with what the other guys are doing and conform myself to their style, if that makes sense."

'It was inspiring to watch the ferocity'

Chan had arrived at the rink buoyed by the results of Canada's women a night earlier. He'd watched on TV as Kaetlyn Osmond captured silver and Gabrielle Daleman won bronze.

"Blew me away," Chan said. "It was inspiring to watch the ferocity that these girls had. Gosh, I was more nervous than they were probably. Honestly, I was sweating a little bit watching, because they were skating last, they skated after [Evgenia] Medvedeva. that's a lot of pressure on those girls and they really came through. They're the highlight of this event this year."

Canada's men's results means the team will only have two skaters in men's singles at next year's Pyeongchang Olympics. They needed to finish with a combined placing of no higher than 13 to qualify three.

Reynolds let out a holler of joy after his program that included four quads.

"It was exhilaration," he said. "At the world championships, the most important competition this season. . . I left my two best performances possibly of my career on the ice. It was just a thrill that everything I've worked for in training went exactly right in the competition."

Later Saturday, Canada's Olympic gold and silver medallists Tessa Virtue and Scott Moir took aim at their third world title. They had a 5.5 lead going into the free dance.

You can catch more figure skating coverage on Saturday at 3 p.m. ET on Road to the Olympic Games, our show spotlighting the best high-performance athletes from Canada and around the world.

CBCSports.ca will live stream every short and free program, right through the gala presentation on Sunday at 7 a.m. ET. Click here for the full schedule.