Piper Gilles leaned in to inspect one of the bottom buttons on Paul Poirier's shirt on Friday, then pulled a silvery hair from the button.

"There's still hair coming off his costume," Gilles said with a laugh.

Their quickstep program went awry just seconds in when Gilles looped under Poirier's arm and caught the top of her braided crown of hair in Poirier's button. It took several seconds — with Gilles stuck, bent at the waist, her mouth agape in shock — for Poirier to unhook them. 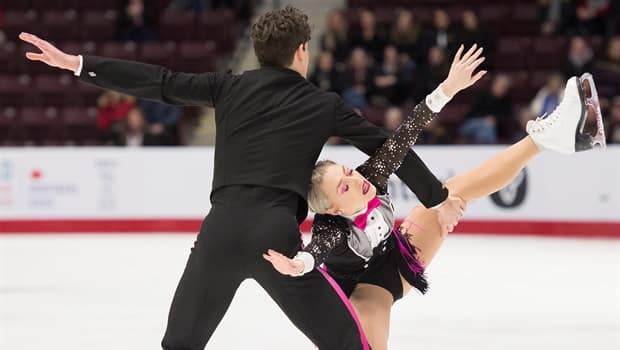 1 year ago
0:30
The Canadian duo of Piper Gilles and Paul Poirier sit at the top of the ice dancing field despite an unusual wardrobe malfunction that saw Gilles hair get caught on Poirier's costume. 0:30

The duo went on to score 88.86 points, well ahead of Marjorie Lajoie and Zachary Lagha, last year's world junior champions, who were second with 77.26. Carolane Soucisse and Shane Firus scored 75.83 to finish third.

Alicia Pineault of Montreal is the leader after the women's short program.

Wardrobe malfunctions are a hazard in the glittery, gauzy, sequined sport of figure skating. Skaters have split pants and bared breasts. At the Pyeongchang Olympics, the strap on Gabriella Papadakis's dress broke, exposing her breast. She and French partner Guillaume Cizeron won ice dance silver behind Canada's Tessa Virtue and Scott Moir.

Getting stuck, Gilles said, was a first for her.

"We've decided you can throw really anything at us after that," said Gilles, a 28-year-old from Toronto. "Thank god we've got some random cues for how to pick up things."

"Romance" was their cue word for that portion of the program.

Gilles skated the program with a portion of her hair pulled loose.

"I had the whole pile flapping on the side on my head. Like, yup, it's still there. How ridiculous do I look right now?" she laughed. "Because I was laughing about my hair, I don't think I was so focused on my feet and I just let myself go on autopilot and let the training do its work."

After competing in the shadows of Virtue and Moir for years, Gilles and Poirier, a 28-year-old from Unionville, Ont., are aiming for their first Canadian title. They've been runners-up four times, either to Virtue and Moir, or Kaitlyn Weaver and Andrew Poje, who are taking the season off and could also retire.

In women's singles earlier Friday, Pineault landed three triple jumps to score 63.15 points for her program to Amy Winehouse's "Back to Black."

"A year ago, I was in a wheelchair in the stands," said the 20-year-old from Montreal.

She'd suffered a high ankle sprain just before leaving for last year's Canadian championships, and tried to practise without success.

"It was really hard both physically and mentally trying to recover so quickly," Pineault said. "I did it give a try but at the end of the day, time was missing." 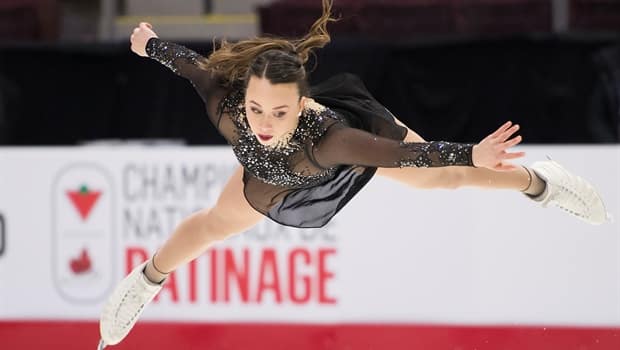 1 year ago
0:28
Montreal's Alicia Pineault received a short program score of 63.15 to lead the women's event at the National Figure Skating Championships. 0:28

The 22-year-old Daleman has had a laundry list of ailments in the past couple of seasons, and sat out a good chunk of last season to deal with mental health issues. She finished fifth at the Canadian championships last year, but was a late addition to the world team after proving fitness. She finished 11th at the world championships, her worst result in five years.

Daleman said last week she was dealing with pneumonia, and had missed a few weeks of training earlier in the season with an ankle injury.

It showed Friday, as she stumbled out of a jump, and had difficulty reaching her blade with her hand on what would normally be a beautifully-executed and routine layback spin.

"Strategy is I was just going into the skate doing what I know how to do, it's been awhile for competition, but at the end of the day it's no excuse, injury is no excuse, pneumonia is no excuse, I'm not going to be one of those people who's going to blame it on something," she said. "It was a bad skate, I'm an athlete, it happens and I'm going to put it behind me."

Less than four months after his younger brother Paxon died in a motorcycle crash in Anchorage, Keegan Messing is aiming for his first national title at the Canadian figure skating championships, and a spot on the world championship team. 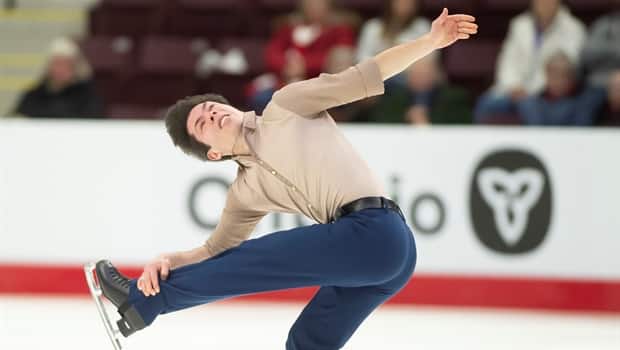 1 year ago
0:29
Keegan Messing jumped out to the top spot at the Canadian National Skating Championships after a beautiful short program dedicated to his new wife Lane Messing. 0:29

"I watched Keegan's entire skate, so it was very special to see him put that out, especially that quad combo, that was a real beauty," said Nguyen, a 21-year-old from Toronto.

The men's short program was Friday evening at Paramount Fine Foods Centre, with the free program scheduled for Saturday.

The national event determines the team for the world championships in Montreal in March.