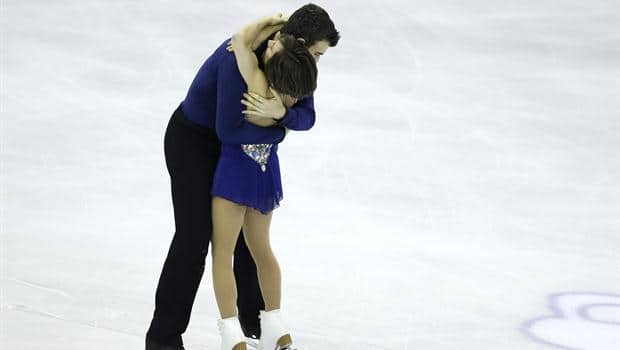 5 years ago
8:16
Meagan Duhamel and Eric Radford finished 2nd to the Russian pair of Ksenia Stolbova and Fedor Klimov at an ISU event in Barcelona, Spain on Friday. 8:16

Stolbova and Klimov added to their slim lead after Thursday's short program by scoring 154.60 points on a flawless free skate for a total of 229.44.

Duhamel and Radford won the duel last year at the same rink in Barcelona, but came second with a total of 216.67.

"We are very happy that finally, in the end of the season, we managed to skate a clear program," said Klimov. "I think it's the first this happened for us in competition this season."

Duhamel and Radford set a tough act to follow by only committing one bobble on an otherwise error-free routine that included a daring throw quad salchow, putting them in first place before Stolbova and Klimov went on.

But the Russians, who took the silver medal at the 2014 Sochi Olympics and have finished second at the world and European championships, were up to the challenge and breezed through their performance to "The Man and the Shadow."

Stolbova leapt to her feet and pumped her fists in the air when the winning score appeared on the overhead monitor.

Still, the winners think they will have to include more difficult elements to keep up with the competition.

"More and more couples do quads now," Klimov said. "In this competition it was enough to do a clear program with good jumps, but in future I think we need to do some more high level elements. I think we will do it and add it to our program."

In the short ice dance, defending GP Final champions Kaitlyn Weaver and Andrew Poje of Canada took the lead with a score of 72.75 points after performing a waltz and polka routine.

"We are very pleased with our performance today," said Weaver. "We have felt great in practice all week. There is something pleasant and familiar being back in Barcelona."