Defending pairs champions Meagan Duhamel and Eric Radford of Canada were in third place following the short program on Thursday in Barcelona, while Patrick Chan and Yuzuru Hanyu put on polar opposite performances. 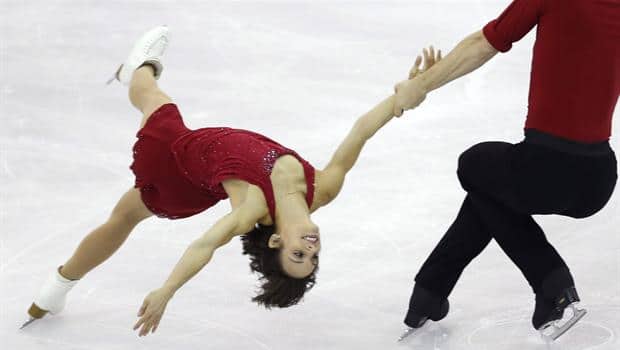 Russian pair Ksenia Stolbova and Fedor Klimov took the lead of the Grand Prix Final after the short program on Thursday in Barcelona.

Stolbova and Klimov earned 74.84 points from a sensual and error-free performance to I Put a Spell on You.

We had several small mistakes and lost some points, so it could be better but we are happy about the score and about our skate," Klimov said.

In men's competition, Olympic champion Yuzuru Hanyu of Japan broke his own points record for a men's short program to take a commanding lead, earning 110.95 points.

That surpassed his own record-breaking short program worth 106.33 from last month's NHK Trophy.

Toronto's Patrick Chan is sixth after the short program with 70.61 points, nearly 30 shy of his personal best.

"I messed up," the three-time world champion told reporters. "I tried to add the combo on the Lutz because you never want to give up. I tried to feel the program, feel the jumps but it wasn't successful. I just have to put that behind me and have a fresh start."

Meanwhile, Duhamel and Radford, who also hold the world title, were on course for a bigger score until Duhamel fell while trying to land a throw triple lutz near the end of their program to Elton John's Your Song.

It was the best short program we've done this season. But we know we're capable of more.- Canada's Meagan Duhamel after Thursday's pairs short program

"Falling on the throw was a complete fluke," Duhamel said. "It has never happened on the short program to us, and we will do it well tomorrow.

"It was the best short program we've done this season. But we know we're capable of more."

"We approach every event the same," he said. "When the music starts we bring ourselves back to the same place. That's what we'll do [Friday]. We know we are capable of skating a great long program."

For Séguin and Bilodeau, Thursday's performance was also a season best.

"We felt really great out there," said Seguin. "We are taking it as an experience and this gives us some confidence for the free skate."

The women's short program and the short ice dance are Friday.