Team Canada hobbled, but hanging in at Brier

With Ben Hebert watching from the back bench and Scott Pfeifer throwing first stones, Kevin Koe guided the defending champs to an 8-5 win over Nova Scotia's Jamie Murphy at the Tim Hortons Brier on Tuesday in St. John's. 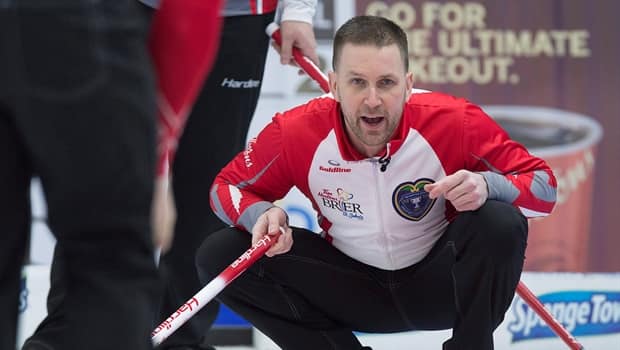 Canada alternate Scott Pfeifer can call it an opportunity.

With Hebert watching from the back bench and Pfeifer throwing first stones, Koe guided the defending champs to an 8-5 win over Nova Scotia's Jamie Murphy at the Tim Hortons Brier on Tuesday.

A three-point eighth end helped Canada earn the victory at Mile One Centre. Hebert is prepared to play through the pain as needed but may sit out if the injury flares up again.

"He's got a torn meniscus in his knee," Koe said. "He's going to need surgery after the season or maybe after the event depending how well we (do). So it's just trying to manage it. He'll still be playing some games but he's just not going to be able to play every game.

"We're going to need him at the end so the decision was made to give him a game off."

Hebert, who was walking with a slight limp after the morning draw, returned to the lineup in the evening but his rink dropped a 6-4 decision to Alberta's Brendan Bottcher.

The 2010 Olympic champion downplayed the severity of the injury.

"It's unfortunate but I'm fine," Hebert said. "I'll play on some painkillers. No sweat. It's no big deal."

Manitoba's Mike McEwen suffered his first loss of the competition Tuesday night. B.C.'s John Morris scored a pair in the eighth end and hung on for a 7-5 victory.

McEwen outscored New Brunswick's Mike Kennedy 9-7 earlier in the day despite throwing a team-low 79 per cent. He needed three straight deuces to salvage the win.

"You're probably going to have an ugly victory here or there," he said. "That's about as ugly as you want to get."

Jamie Koe of the Northwest Territories picked up his first win by upsetting local favourite Brad Gushue of Newfoundland and Labrador 8-4. Gushue bounced back with a 7-5 victory over Northern Ontario's Brad Jacobs.

After 10 draws of round-robin play, McEwen leads the round-robin standings at 5-1. Jacobs is alone in second place at 5-2.

Kevin Koe, Gushue and Menard are next at 4-2 while Casey and Morris are 4-3. Bottcher improved to 3-4 and Murphy is alone in ninth place at 2-4.

Kennedy, Howard and Jamie Koe are in last place at 1-5.

Pfeifer, who curled at 71 per cent, also served as Koe's alternate at last year's Brier in Ottawa.

He won four national titles in the early 2000s with the famed Ferbey Four team, but has seen limited elite-level competition in recent years. His last in-game Brier experience came in the 2005 championship game in Edmonton.

"You get out and have a few training weekends with the boys that I got down to," Pfeifer said. "Really you just try to stay fresh, limber up, and be ready for the call whenever they might need you."

Round-robin play continues through Friday morning and the medal games are scheduled for Sunday.

The Brier winner will represent Canada at the world men's curling championship next month in Edmonton.