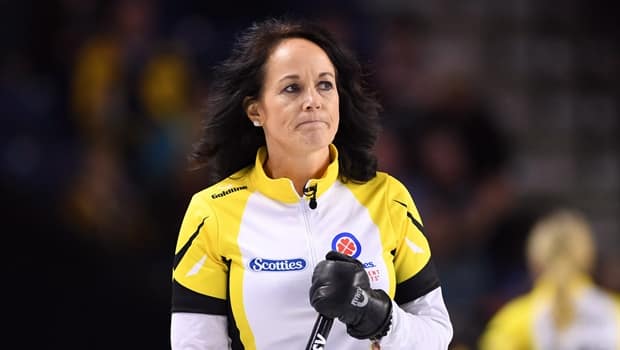 Michelle Englot was recruited precisely for this situation.

Short on previous playoff experience at the Canadian women's curling championship, Manitoba will lean on a woman who has been there, done that.

Both 10-1 to conclude their preliminary rounds, Englot and Homan meet again Friday night in a playoff game.

The winner goes directly to Sunday's final, while the loser must win Saturday's semifinal to gain a rematch.

Northern Ontario's Krista McCarville, 7-3, needs a win over Kerry Galusha of Northwest Territories on Friday morning to get into the final four. A loss drops her into a tiebreaker with Quebec's Eve Belisle (7-4).

The winner of Saturday afternoon's playoff between Carey and the team to be determined advances to the semifinal.

The closest Wilson and Westcott came to playoffs was losing a tiebreaker in 2010.

Englot, 53, skipped Saskatchewan to the playoffs twice in seven appearances. She finished third in both 1988 and 1989.

'We know how big this is'

"Back in '88 and '89, we didn't really realize how big this is," Englot said. "Now, we know how big this is, but yet, in the same breath we need to stay the course, stay relaxed and stay focused."

The Regina resident — Curling Canada allows each team to have one out-of-province member — did that in the preliminary round.

"I'm more of a fiery player than she is, so for each other we bring out the best in that way. She can really guide my team to stay calm in those high-pressure situations."

Englot knows from experience how difficult it is to win your province and get to the Canadian championship. She's revelled in her new team's performance both in Manitoba playdowns and in St. Catharines.

"This has been a really fantastic fairy tale year," the skip said. "This year has been more exciting for me just because I know the team is super-talented and we have the opportunity to be at the top.

"We know if we play well we can definitely compete with any team in the world, so we're looking forward to the playoffs."

Manitoba dominated Ontario in the round-robin finale for both teams, scoring four in the first end and stealing singles in the fourth and fifth to open up a 7-2 lead.

The Winnipeg rink then threw big-weight hits to defend that lead.

"Teams have been coming [back] from deficits all week long week," Englot said. "Every point counts against a team like Rachel Homan.

"We just wanted to keep counting when we had hammer and make sure we didn't give up any steals to get into any trouble."

At the top seed, Manitoba gets hammer to start Friday's playoff against Homan.

"Really important against a team like this," Englot said. "We started out with hammer today and took advantage of it. Hopefully we can do the same tomorrow."

Ice crews played catch-up with the ice Thursday because of double-digit temperatures and high humidity outside, plus a dehumidifier malfunction the previous day.

They took the unusual step of scraping and pebbling at the fifth-end breaks of all three draws. Frost buildup forces teams to play more hits and fewer finesse draws.

"Ice isn't great right now," Homan said. "They're working on it and it's getting better. We'll get all the humidity out. I'm sure it's going to be awesome tomorrow."

Homan said her team's struggles against Manitoba didn't detract from a solid preliminary round.

"We had an awesome round robin," the skip said. "Super-proud of the girls. Worked really hard to get in this position in the one-two [game], exactly where we wanted to be."

Fatigue was surfacing among the teams in the form of raspy voices.

"Exhausting," croaked Cameron. "You really have to take care of yourself when you're not curling to be prepared for curling. Sleep, eating the right foods and stretching. Your body can't get tight."