Chelsea Carey beat Krista McCarville 5-2 on Friday morning to lock up the first seed in the women's draw at the Olympic curling trials in Ottawa.

Tirinzoni brought in Cathy Overton-Clapham as a substitute last season due to injury. Overton-Clapham played a few Grand Slam events and was quick to show her Hall of Fame form.

"I just got that fire back in me," Overton-Clapham said. "Fortunately I got the call from these guys to play with them."

Carey was looking for a third after Amy Nixon's retirement and Overton-Clapham fit the bill. She locked in last March and the transition was almost seamless.

Now the Calgary team is just one win away from an Olympic berth after capping a perfect round-robin Friday at the Tim Hortons Roar of the Rings.

"We're having fun, we're making some shots and we're getting some W's along the way," Overton-Clapham said.

Carey beat Krista McCarville 5-2 in the morning and dumped Winnipeg's Michelle Englot 10-3 in the afternoon. That left her with an 8-0 record and a berth in Sunday's championship at Canadian Tire Centre.

Ottawa's Rachel Homan and Winnipeg's Jennifer Jones locked up the other two playoff spots Friday without stepping on the ice. They met in the evening to determine seeding for Saturday's semifinal when they'll play again with much more on the line. 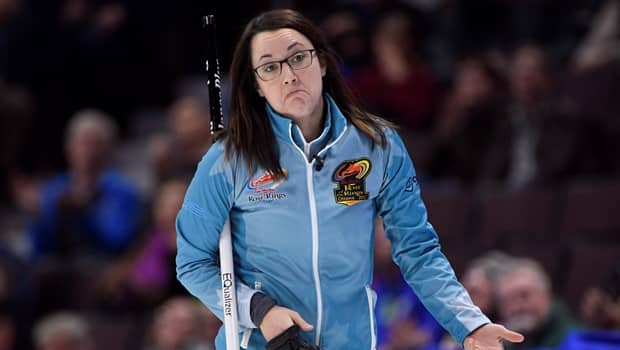 It was a tough day for McCarville, who had a chance to be right in the playoff mix. After the morning loss, Edmonton's Val Sweeting beat her 7-6 in the afternoon to rule out weekend play.

Calgary's Kevin Koe (7-0) and Brad Gushue (5-2) of St. John's, N.L., had the top two men's seeds locked up entering their tuneup game against each other Friday night.

The third and final playoff spot remained up in the air entering the final draw. Reid Carruthers (4-3) needed a win over Edmonton's Brendan Bottcher to set up a tiebreaker against fellow Winnipeg skip Mike McEwen.

Bottcher's playoff chances were snuffed out when he dropped a 6-4 decision to McEwen in the morning. McEwen took the lead with three points in the eighth end and added a single in the ninth.

"It felt good to really grind out that game," he said. "That was the team playing really well and we're going to have to be able to win games like that going forward."

A Carruthers loss in the evening would give McEwen the third seed. 3 years ago
1:16
Mike McEwen took down Brendan Bottcher in a narrow 6-4 decision to keep his playoff hopes alive at the Roar of the Rings. 1:16

Jones, who won Olympic gold in 2014, could breathe a little easier entering her round-robin finale. Instead of needing a win to avoid a tiebreaker, the McCarville loss meant Jones was playing for her choice of hammer or stones in the semifinal.

A Homan victory would give her both hammer and stones.

Carey, meanwhile, became the first women's team to sweep the round-robin at the Olympic Trials.

"Then you come out in the final and you allow the training to take over as much as you can and just hope it's your day."

In the men's standings, Bottcher was 3-4 and reigning Olympic champion Brad Jacobs of Sault Ste. Marie, Ont., was 3-5 along with John Morris of Vernon, B.C. Saskatoon's Steve Laycock and Toronto's John Epping were 2-6.

If a tiebreaker is needed, it will be played Saturday morning before the semifinals. Both finals are set for Sunday.

The winning teams will represent Canada at the Pyeongchang Olympics in February.