OTTAWA — There will be a new Olympic champion at the 2018 PyeongChang Games.

"It's an unbelievable feeling to finally be in the final," she said after the win.

"It feels really good to play that well against Jennifer Jones. They're a great team." 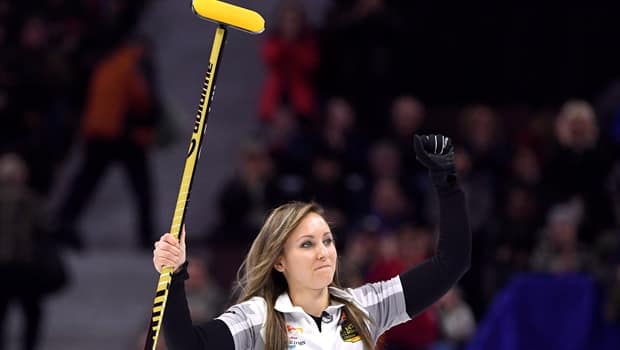 Homan has been leaning hard on her left sliding foot – a reminder of the motto she has tattooed on that same foot that guides her curling game and life.

She was 22 years old when she got it. She didn't tell anyone she was doing it.

'Through adversity to the stars'

Per ardua ad astra is etched on her sliding foot – which in English translates to "through adversity to the stars."

It's meaning is no doubt loaded with significance. It's the motto of the Royal Canadian Air Force. Homan's grandfather, Gerry Homan, was a navigator with the RCAF.

"It's significant of my entire family and curling and how it all ties together. It means a lot to me. Family is huge and really important to me and that's where it comes from," she said.

Gerry Homan died on April 1, 2011 at the age of 79. He was an avid curler throughout his entire life and Rachel Homan's biggest fan. Gerry was able to watch his granddaughter's first-ever Scotties just a couple of months before he died.

She's now one win away from making it to the biggest sporting event in the world. She can't help but think about her grandfather right now.

Homan's curling roots can be traced back to her grandfather. Wherever he was posted throughout the world during his time in the RCAF, Gerry Homan always curled. He curled outdoors in the mountains of Switzerland. Then came to Canada and curled in Edmonton, Winnipeg and even Trenton.

He finally settled in Ottawa.

"He lived all over the world. He retired, loved Ottawa and stayed here," Homan said. "So to have this event in my hometown is something I'll never forget."

Homan says she can picture her grandfather curling outdoors in the Alps. She smiles when she thinks about it. He had such a profound effect on her. One she didn't even realize until he was gone.

"He really started this. It's where curling came from in our family," she said.

Where Homan's curling greatness all began

Rachel Homan's dad, Craig, bursts with pride when he talks about his daughter and dad. He loves to share the story of how this all started.

Craig remembers vividly the first time they all curled together. Rachel, her brother, Craig and Gerry were on a team playing in the Eganville Turkey Bonspiel.

"She was lead," Craig said. "But you know those little rocks they use sometimes? Her first shot was a takeout on a bigger rock and she hit it dead on the nose and it just bounced away."

"The rock didn't move. She said 'to hell with that, I'm not using that anymore.'"

The Homan foursome went onto win that Turkey Bonspiel. And it'd be the first time Rachel Homan's name appeared in print regarding curling.

Homan's memory of it all is a little foggy, but she does remember winning that first bonspiel with her brother, dad and grandpa.

"I think that's the one we all won a turkey. We actually won three. We brought three turkeys home to my mom," she said.

There's a lot more than a few turkeys on the table for the victors of this bonspiel. Homan knows it won't be easy.

In fact, in a lot of ways these Olympic trials and the entire season have come with a lot adversity for Homan. They didn't even make the playoffs at the first two Grand Slam events this year.

But now Homan is hoping to reach the stars. That motto.

The team started the tournament with a loss to Carey in the first game. Now, they meet in the last game. Homan has had to battle, make big shots and come through in the clutch. Now they've won eight games in a row going into Sunday's final.

"It's just so special being here this week," Homan said. "We're going to focus on us. It's a journey for the four of us and we're feeding off the energy."

Craig Homan is thinking about what his dad would think of all of this. He gets emotional at times thinking about how Gerry's love of curling has translated into his daughter being one win away from the Olympics.

"This sport has raised my daughter, frankly," Craig said. "It taught her things I couldn't teach her."

That ten-year-old girl who "looks pretty good" at curling, could be an Olympian by Sunday night with a win over Chelsea Carey.