He's won past 2 Briers, but Gushue is hungry for more

For 13 years Brad Gushue showed up at the Brier hoping his time to rise to granite stardom would arrive. Three years later, he's the biggest star in Brandon.

BRANDON, Man. — For 13 years Brad Gushue showed up at the Brier hoping his time to rise to granite stardom would arrive.

He so badly wanted to be mentioned in the same conversation as the greats such as Kevin Martin, Randy Ferbey and Glenn Howard.

There have been many times over the years Gushue questioned if it would ever happen. And then in front of a hometown crowd in St. John's two years ago, Gushue realized all his curling hopes and dreams.

Sure, he had won Olympic gold in 2006, but it was that Brier he wanted.

He finally captured the elusive tankard, with family, friends and an entire province going wild over his 2017 Brier win in St. John's.

That propelled Gushue's team into last year's Brier in Regina. Finally wearing the maple leaf on his back as Team Canada at the national championship, Gushue had an undeniable swagger and rolled through the competition to win his second straight.

Now Gushue is the team to beat at the Brier. It's what he's always wanted. And yet he still wants more.

"If you're the team to beat it means you've done something," Gushue said. "The first number of years it was always those guys winning and I wanted to be that team. We've got a pretty big target on our back which I don't think is anything different from last year."

Gushue is looking to become only the second team ever in the history of the Brier to win three consecutive titles. The Ferbey Four from Alberta did it in the early 2000s. The Newfoundland and Labrador skip hasn't really considered what it would all mean to him.

"You guys keep asking me about it," he said. "Certainly it would be nice. I don't have that on my goals list. It would be a nice accolade to have but it would be nice because we would have won this week."

There are 15 other teams in Brandon this week who are looking to stop the historic Gushue run. And perhaps the toughest test standing in the way of Gushue is Kevin Koe and his new team out of Calgary.

Koe could make some of his own history this week with a Brier win. It would make him just the fourth skip to win four Canadian men's championships; Ferbey, Kevin Martin and Ernie Richardson are the others.

Then there's Brad Jacobs' team from Northern Ontario, who captured the title in 2013 and are always a threat. They've added Adam Kingsbury to their coaching roster to help with the mental aspect of their game — it paid off with a Canada Cup win in December.

And don't look past the local hometown curling heroes skipped by Brandon native Mike McEwen. There have been some turbulent swings for the newly formed team and some line-up shuffling along the way, but they feel as though they're playing some of the best curling right now going into the Brier.

This the second year for the new Brier format of two pools of eight teams. In the past, there were 12 teams at the Brier and each team played one another once in a round-robin format.

The teams are now split into two pools and play seven games in the preliminary round. From there, the top four teams in each pool advance to the championship round.

The four teams who advance from Pool A will play the four teams from Pool B on Thursday and Friday, and then the top four, including results from the preliminary round, will move into the traditional page playoffs Saturday.

The championship game is Sunday, March 10. The winning team will represent Canada at the world championship in Lethbridge, Alta., and return as Team Canada at next year's Brier in Kingston, Ont.

The newly added wild card playoff game has added an extra layer of drama to the Brier, with the two highest-ranked teams who didn't qualify through their provincials playing a one-game showdown to earn a spot in the national championship.

After a blanked first end, Epping cranked up the pressure in the second end without hammer and was able to steal a single point.

In the third, Bottcher was able to manufacture an easy score of two points and then stole a single in the fourth end to increase the lead to 3-1. 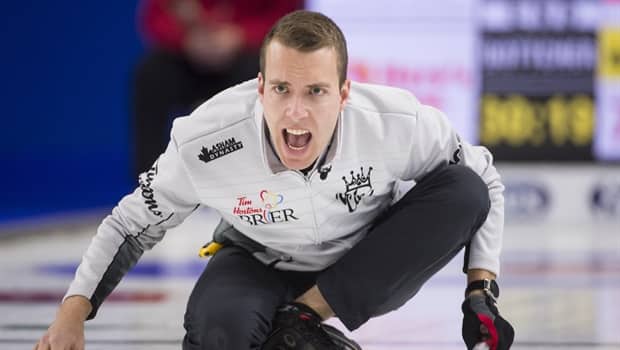 After Epping scored a single in the fifth to cut the lead to one, the teams traded deuces in the sixth and seventh ends to make the score 5-4 Bottcher, with the hammer in the eighth. Epping just missed two double takeouts allowing Bottcher to take a controlling 7-4 lead with just two ends to play.

"It was nice just to play well. I'm just so proud we're going to be sticking around," Bottcher said. "I really felt at peace with the game tonight. Either way I was going to be OK with it."

Bottcher will now play in Pool A, with a first-game battle against Jacobs.

"In the past I think experience caught us a few times," Bottcher said. "I'm playing against a lot of my idols in all of these big games still. You get a little nervous. Now it's starting to feel comfortable and we feel we belong."