Roy's team — including vice-skip and Amelie Blais, second Dan deWaard and lead Brenda Nichols — capped a perfect 12-victory run through the mixed nationals, and gave Quebec just its second gold medal since the event's inception in 1964. Jean-Michel Menard was the other Quebec winner, in 2001 at Weyburn, Sask.

"It feels so amazing, winning in my hometown," said the 42-year-old Roy. "It was a crazy we ek, and I am so happy. The crowd was amazing. We just tried to play our best and focus on playing the right rock at the right moment. Everything rolled right for us this week."

Quebec broke open what had been a tight game with a count of three in the sixth end to make it 6-2. New Brunswick was going hard for the steal, but Roy was left with an inturn draw to the four-foot to score the three and take control.

New Brunswick, backed by vice-skip Sylvie Quillian, second Marc Lecocq and lead Jane Boyle, fell short in its bid for a third Canadian mixed title, and a second for Odishaw, who captured gold in 1994 at Leduc, Alta. 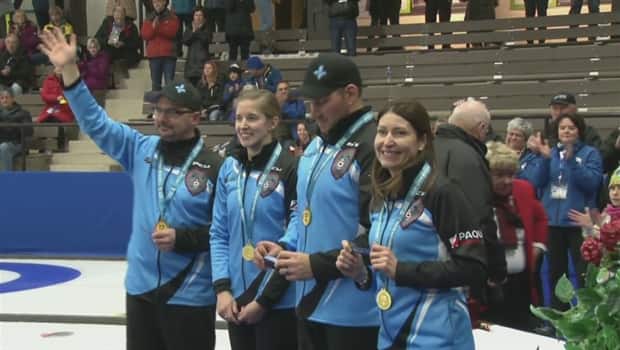