Wes Forget's old-school backswing is part homage to his curling idols, but part practical too.

27-year-old breaks out vintage delivery in honour of 'Russ, Glenn, Wayne and Richard'

Wes Forget's old-school backswing is part homage to his curling idols, but part practical too.

Swinging the 18-kg stone behind the body like a pendulum before sliding out of the hack may be circa 1980, but it hasn't completely gone out of fashion.

A few men still do a variation of the wind-up, but Ontario's second adds style to it.

Like the majority of curlers at the Canadian men's championship, Forget uses the modern no-lift delivery most of the time.

But Forget (pronounced FOUR-zhay) breaks out the backswing to peel guards from the front of the rings.

The 27-year-old from Kingston, Ont., tweeted on opening day of the Tim Hortons Brier "I throw with the backswing because of 4 people named Russ, Glenn, Wayne and Richard."

"When you come from Ontario, if you were to name the top 10 curlers in the world to have ever played, you're probably naming Wayne Middaugh, Glenn Howard, Russ Howard and Richard Hart, so why wouldn't I throw the backswing?" Forget told The Canadian Press. "When you come from Ontario, if you were to name the top 10 curlers in the world to have ever played, you're probably naming Wayne Middaugh, Glenn Howard, Russ Howard and Richard Hart, so why wouldn't I throw the backswing?" Forget told The Canadian Press.

"It is old school. It is a bit of an homage to throw back to some of those older names and the way the game used to be played. Honestly, I think it's a little bit easier to make peels with it."

Canadian, world and Olympic champion Russ Howard did a double take in the broadcast booth in Brandon, Man., the first time he saw Forget getting air behind his backswing.

"It was just so elegant and smooth," the 63-year-old said. "He goes back farther than I ever did."

Ontario won a third straight game to get to 3-2 in Pool B and put Scott McDonald's foursome in better position to play in the championship round Thursday and Friday.

The top four teams in each pool at the conclusion of the round robin Wednesday night carry their records into the championship round, from which the four Page playoff teams emerge.

Northern Ontario's Brad Jacobs (6-0) and Brendan Bottcher's wild-card team from Edmonton (5-1) secured berths in the championship round from Pool A on Tuesday. 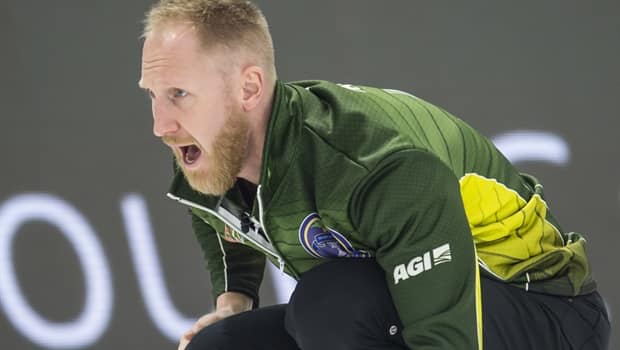 Brad Jacobs stays perfect at Brier with win over Manitoba

Saskatchewan's Kirk Muyres (4-2) was assured at least a tiebreaker. Manitoba's Mike McEwen and Yukon's Jon Solberg (3-3) were jockeying for the final berth in the pool.

Alberta's Kevin Koe topped Pool B at 5-0 to secure a berth in the championship round.

Defending champion Brad Gushue was 4-1 followed by Ontario, Nova Scotia's Stuart Thompson and B.C.'s Jim Cotter all in the mix at 3-2.

Done properly, the backswing delivery requires less leg drive than the no-lift and more power is generated. Howard recommends the technique in his book "Curl To Win," which Forget owns.

"That kind of affirmed my reasoning. I'm doing it. Russ Howard said so," Forget said. "When Wayne Middaugh picked up on my tweet and re-tweeted it, I was like 'Yup."'

Timing and mechanics have to be smooth and in sync, lest pieces of curling ice go flying at the bottom of the swing or Forget gets pulled off target sliding out of the hack by momentum gone awry.

Said Forget: "I wouldn't say I wrecked any hacks, but you leave smaller and smaller divots in the ice as you practise it.

"When I was younger and trying to practise it, I would walk around and do this," he added, gently swinging his right arm.

The main reason the backswing is considered vintage is curlers are now taught the sport at a younger age and don't have the strength to heave 18 kg of granite behind them and control it, Howard pointed out.

"I recommended it because you can just throw it harder," he said.

Forget said he got the yips and parked the backswing for a time last year before Adam Kingsbury, who currently coaches the Brad Jacobs team, helped get it back.

"I just forgot, excuse the pun, how to do it," Forget quipped. "He found some things in my delivery and squared it up and evened it out and it fixed everything."

Forget's skip is fine with his second's wind-up as long as he makes the shot.

"I know it's been inspired by some great Ontario curlers that Wes idolized when he was young," McDonald said. "When Wes is throwing it well, it's pretty effortless.

"It just comes down the ice at you like an arrow."