Brad Gushue's success in curling has been a double-edged sword in his home province of Newfoundland and Labrador.

Brad Gushue's success in curling has been a double-edge sword in his home province of Newfoundland and Labrador.

The teams he skipped became so dominant, the number of rinks entering provincial men's playdowns dwindled to a half-dozen or less.

But Gushue claiming Canadian titles in both 2017 and 2018 created a curling churn in the competitive ranks.

The Tim Hortons Brier victor gets an automatic entry the following year as Team Canada. Gushue hasn't played in a provincial championship for two years.

And in a province that lacks the large player pool of curling heavyweights Ontario, Manitoba and Alberta, the prospect of a second Newfoundland entry in the Brier stimulated men's competitive curling.

A dozen teams registered for this year's Tankard, which was an increase from nine in 2018. "In terms of competitive curling in Newfoundland, when Brad is not in the picture, it's certainly kind of an extra ray of hope from everyone's perspective," Newfoundland skip Andrew Symonds said Saturday.

"We had a lot more teams this year than we did last year even. If he wants to keep winning the Brier every year, I think a lot of people back home would think that's great for a number of different reasons."

Gushue opened defence of his title with a 7-6 win over Ontario's Scott McDonald, while Symonds fell 5-4 to Prince Edward Island's John Likely. 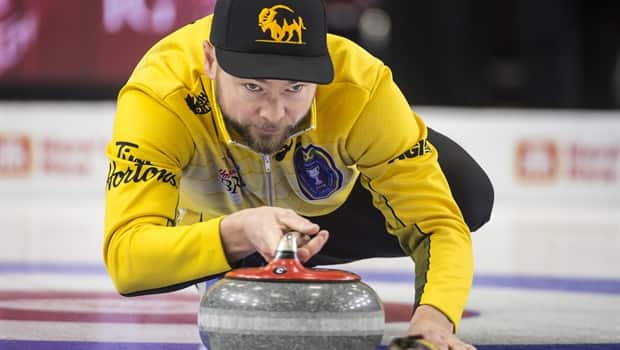 Prior to Gushue securing his first Brier title two years ago in his hometown of St. John's, he'd won 21 provincial championships.

He was absent in 2006 because he was otherwise occupied leading Canada to its first Olympic gold medal in men's curling in Turin, Italy.

Keith Jewer is the lone member of the Symonds team with previous Brier experience. He was Ken Peddigrew's lead in 2006.

"I've been around since the early 2000s when Brad hit the scene," Jewer said. "My first provincials was the year he won juniors, so I saw him develop and become what he is today, which is one of the best teams in the world.

When Gushue prevailed again in Regina, men's teams in Newfoundland started preparing earlier to take advantage of it.

"We'd lost the Tankard final last year to Greg Smith. Watching Brad win the Brier again last year, it was kind of like the light bulb going on that "we have another opportunity here, so let's make the most of it,'" Symonds said.

"Not only our team, but every team that played in the Tankard was different from the previous years, so everybody was tweaking things and trying to find the right combination.

"There were a lot more teams travelling this year off-island which is kind of rare."

The Symonds foursome twice travelled to Quebec this season to play tour events on arena ice.

The combination of Gushue winning a Brier in his hometown, winning it again the following year and thus creating more suspense in men's competitive curling at home helped Symonds to find sponsorship money to travel and step up their game.

"He's a rock star, literally. After the excitement of the Brier and him winning, we were lucky," Jewer said. "It was the best sponsorship we've ever had.

"For a golf analogy, Tiger Woods is very tough to beat, but all the people around him are grateful for the awareness he brought to the sport."

Gushue and Symonds are in separate pools in Brandon, so an all-Newfoundland matchup depends on both making the championship round.

The Newfoundland playdowns also format altered in Gushue's absence. An undefeated team in the round robin — traditionally Gushue — had to be beaten twice in a final.

"To try and beat those guys twice in the same day is tough," Symonds explained. "They've removed that now so it's in line with all the other provinces with a one-game final."

Gushue is aware his achievements are a mixed blessing for Newfoundland curling.

"If we don't win here this week, I'm hoping there's 12 teams [in provincials] next year," he said. "I'd feel guilty if we go back and there's two again.

"I just like the fact there's a number of teams putting in more effort and travelling to these spiels trying to get better. That's what we need to do as a competitive curling community in Newfoundland.

"Unfortunately for us, it's way more expensive than it is for everybody else."