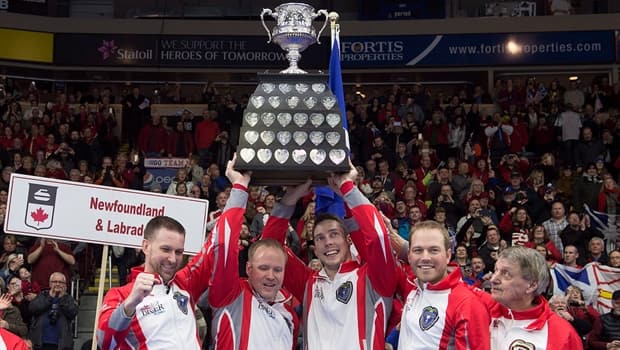 When Brad Gushue was a youngster, he wrote his 10 goals in curling on a sheet of Bristol board.

He had achieved nine of them at the start of the Tim Hortons Brier. Gushue delivered when it counted Sunday night in St. John's and can finally tick the national men's curling championship off his list.

Gushue came through with a draw just inside the top of the eight-foot ring with his final throw for a dramatic 7-6 win over Canada's Kevin Koe.

"I knew we had it," Gushue said. "I was somewhat celebrating from the hogline in because I felt it was going to be a little closer to the button. But anyway it turned out [well], it doesn't matter.

"Ten from years now you're never going to know what shot you had to win. It's just the matter that you won."

The raucous sellout crowd at Mile One Centre fell silent as Gushue settled into the hack for his last shot.

The throw looked a little light at the start but his teammates delivered a killer sweep to get it just past the Canada stone for the victory.

Gushue threw his broom in the air in celebration as the 6,471 spectators in attendance roared their approval.

"I've been close so many times and we as a team have been close," Gushue said. "To finally win it — and win it at home — you couldn't ask for a better story. It's awesome."

This was Gushue's 14th career Brier appearance and third trip to the final. He's the first Newfoundland skip to hoist the Brier Tankard since Jack MacDuff in 1976.

"To stand here in our hometown, in our home province, as Brier champions is just unbelievable," said vice-skip Mark Nichols.

Gushue, who won Olympic gold in 2006, lost in last year's final to Koe and fell to Ontario's Glenn Howard in the 2007 final.

The Newfoundland and Labrador team will represent Canada at the Ford world men's curling championship next month in Edmonton.

"I'm proud of the guys, we fought back and made a game of it," he said. "It probably makes it a little more disappointing."

After an opening blank, the local favourites took advantage after Canada second Brent Laing flashed a stone. With Newfoundland and Labrador sitting three, Koe took one opposition stone out with his last throw but Gushue followed with a draw for a 3-0 lead.

The St. John's side battled some injuries throughout the competition. Gushue has been somewhat limited all season due to a hip/groin issue and lead Geoff Walker is nursing a shoulder injury.

Nichols frequently helped Walker and second Brett Gallant with sweeping duties. Nichols was also in form with his shooting, delivering a nice double takeout to force Koe to settle for a blank in the third end.

Koe rubbed a guard with his final throw but still scored one in the fourth. Gushue had a draw for a pair in the fifth and his rink took a 5-1 lead into the break.

The electric atmosphere in the building was muted somewhat after Koe's triple takeout in the sixth end made it a one-point game. Gushue attempted a double takeout in the seventh but a Canada stone caught just enough of the eight-foot for a steal.

Koe forced Gushue to hit a takeout for a single in the eighth end. In the ninth, Gushue picked out a Canada stone to lay three, forcing Koe to draw for one.

McEwen, who lost the semifinal to Koe on Saturday, used his final throw to hit the Northern Ontario stone off the button for the win.

"As much as we were hurting pretty bad and weren't playing for the colour of medal we wanted to be playing for, we still gave it our all and it mattered," McEwen said.

The afternoon showdown was a rematch of last year's bronze-medal game.

Jacobs defeated McEwen 7-6 in an extra end at the 2016 Brier in Ottawa. Koe and his team of Laing, lead Ben Hebert and third Marc Kennedy defeated Gushue 9-5 in last year's gold-medal game.

Gushue's team receives a base payout of $71,000 in prize money, cresting and funding. A minimum of $30,000 will also be awarded for additional cresting and promotional appearances and Sport Canada will award funding of $144,000 over two years.

Gushue can secure a berth in the Dec. 2-10 Olympic Trials in Ottawa if he reaches the podium at the world championship. Koe has already locked up a spot at the Trials.

Follow along for updates from the Mile One Centre.