Northern Ontario's Brad Jacobs and Alberta's Kevin Koe stayed unbeaten at the Canadian men's curling championship Thursday. Both teams won their first games of the championship pool to improve to 8-0.

The wins are coming, but they're not coming easy for Alberta at the Canadian men's curling championship.

Kevin Koe's team secured a playoff berth and was the only undefeated team left at the Brier with a 9-0 record Thursday.

"It seems every game this week has been a grind," the skip said. "Nothing is coming easy, so happy with where we're at."

When the dust settled on the first day of championship pool play, five of eight teams remained in the playoff picture.

Northern Ontario's Brad Jacobs took a first loss to fall into a tie at 8-1 alongside defending champion Brad Gushue.

Ontario's Scott McDonald edged Jacobs 7-6 in an extra end to stay in the playoff hunt at 6-3. 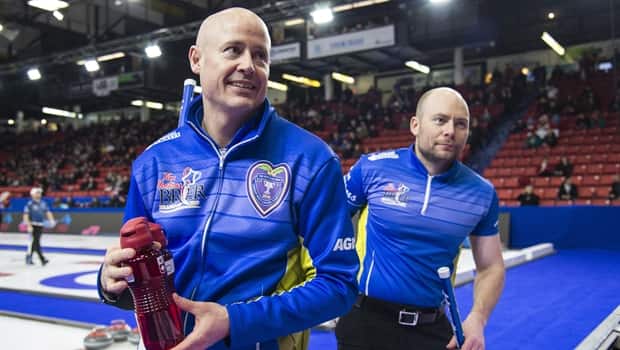 Alberta stay perfect at Brier with win against Wild Card

2 years agoVideo
0:35
Kevin Koe scored three with the final stone to escape with a 7-6 victory for Alberta over Wild Card at the Brier. 0:35

The top four teams from two pools of eight advanced to the championship round that concludes Friday.

The four teams with the best records in the championship pool advance to Saturday's Page playoff.

The winner of the Page playoff between the top two seeds goes directly to Sunday night's final.

The loser drops to Sunday afternoon's semifinal to meet the winner of the playoff between the third and fourth seeds.

Teams carried their preliminary-round records into the championship round.

Ontario was among four teams facing an uphill battle with just four wins, but McDonald won twice Thursday to remain in contention.

"It was really important for us to come out and play well and make shots," McDonald said. "We knew Brad was going to be a tough game and a lot of people would have favoured him to win, especially with how well they've been playing.

"We had a game plan we put in play and thankfully we were successful." 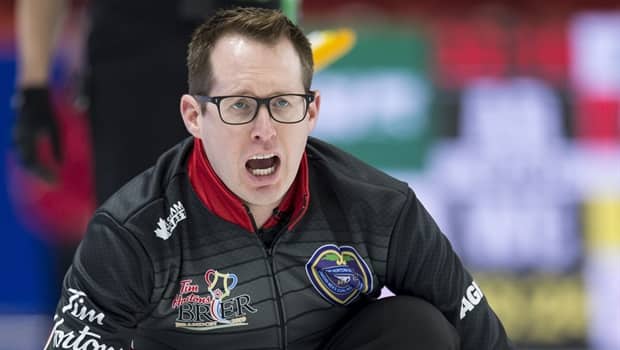 2 years agoVideo
1:02
Scott McDonald and team Ontario took down Brad Jacobs and Northern Ontario 7-6 in 11ends to see Northern Ontario's record drop to 8-1 at the Brier. 1:02

Alberta worked hard for both wins Thursday scoring a deuce in the 10th end to edge Manitoba 6-5.

Trailing Bottcher 6-4 earlier in the day, Koe's threw an out-turn hit — his bread and butter — on his last shot of the 10th for a three-pointer and the victory.

"For some reason, we're good at just kind of sticking around," Koe said. "If we're down a few, we don't just pack'er in and go away.

"We fight for a deuce or a steal here or there or make them make shots at least to earn it."

In contrast to Alberta, Northern Ontario was cruising along controlling every game until coming out cold against Ontario.

Winning the pre-game draw to the button to get hammer in the first end for a ninth straight game, Northern Ontario gave up a steal of two in the first end and a single-point steal in the second to McDonald.

"I was awful," Jacobs said. "Couldn't buy a shot in the first half of the game in all honesty.

"We're still in great shape. Losing right now is exactly what we needed in all honesty.

"You hate to lose, but sometimes when you reflect on a game like that and just the way things have been going all week, I don't think losing a game right now is a bad thing for us."

Lost in the drama of Alberta eliminating the host province and Northern Ontario's loss, Gushue's foursome coolly dispatched Saskatchewan with an 8-4 victory.

"I like what we did today," Gushue said. "We played like the typical Team Gushue. We controlled each game, limited our mistakes and didn't give the other teams many opportunities, which is kind of the way we play.

"Tomorrow we've got to see if we can get into that one-two game, which was the goal at the start of the week."

Bottcher's Edmonton rink recovered from the loss to Koe with an 8-3 victory over Cotter.

"It's nice to not have an evening to sit around and dwell on a loss like that," Bottcher said.

"We just need to go out and play like we've been playing these last couple days and just try and give it our best, especially that first game," he said. "If we can take care of business then, then I think it will pretty much be set."