Four years after standing on top of the curling world at the 2014 Olympics in Sochi, Brad Jacobs and his team from Northern Ontario aren’t going to get to defend their title.

It just never went the way the reigning champions wanted it to go.

Four years after standing on top of the curling world at the 2014 Olympics in Sochi, Brad Jacobs and his team from Northern Ontario aren't going to get to defend their title.

Jacobs was eliminated from the playoffs at the 2017 Olympic trials in Ottawa on Thursday night despite defeating Mike McEwen 6-3.

"We still wanted to come out and win. We all talked about it. We wanted to go out and put in a great performance," Jacobs said after the win.

The team needed the Brad Gushue rink to lose their Thursday night game to give them any chance of survival. Instead, Gushue defeated Steve Laycock 8-5 to lock up second spot.

"We were pretty depressed for the majority of the week. It was too little, too late," Jacobs said.

He just couldn't get traction. Jacobs was haunted by a last shot loss to Kevin Koe. He had an open draw for the win and threw his rock through the house.

But despite how difficult this week was, Jacobs was gracious after being eliminated.

"It's on to the next one now and we wish all the teams who are still left the best of luck. I think Canada will be represented very well in men's and women's curling at the Olympics," Jacobs said.

Baby on the way

It's been an emotional week for the team's second, E.J. Harnden. He and his wife are expecting their second child any minute. He's had a hard time focusing throughout their games and his emotions spilled over after Thursday night's win.

"I knew I might miss the birth of my son if we were in," Harnden said with tears in his eyes. "My wife and I had a whole plan in place to make sure she had the support she needed.

"My father came in and stayed with me all week with the full intention of having emotional support if I needed it."

Harnden will not play in the team's last game on Friday afternoon against John Epping. He's catching a flight first thing to be with his wife.

"She's 39-and-a-half weeks pregnant," he said. "Fingers crossed I'll be there for the birth of my baby boy."

Harnden says the team battled as hard as they could the entire week, but just didn't have it when they needed it.

"It's disappointing. We wanted to come in and put a good week together and become the first team to repeat. The event is so hard and you have to be near perfect to win and we just weren't."

No men's team in the history of the Olympics has been able to win back-to-back gold medals. That streak continues with Jacobs' loss.

In 2013, the boys from the Soo burst onto the curling scene in Canada. They were brash, built and uncaring about what people thought of them.

"We were younger, fit, brought a lot of energy," Jacobs said. "And that was more than people were used to."

They rolled through the pre-trials event in 2013 to earn the right to play in the big show at the trials in Winnipeg. Jacobs, third Ryan Fry, second E.J. Harnden and lead Ryan Harnden carried that momentum to an undefeated Roar of the Rings.

The team steamrolled everyone in the round robin, going undefeated. Then they beat John Morris in the final to earn the right to represent Canada at the Olympics.

Jacobs points to a genuine ability to be brutally honest with and trust in each other as the reason they were able to capture gold for Canada at the Sochi Olympics, defeating Great Britain 9-3 in the championship game.

Now, a new Canadian men's team will earn the chance to follow up Jacobs' gold. Koe is through to Sunday's final. Gushue is into the semifinal. There's just one spot left for a number of men's teams trying to stay alive in Ottawa.

Elsewhere at the Trials

Koe (7-0) booked his spot in the men's final with a 7-4 victory over John Morris in the afternoon. Calgary's Chelsea Carey (6-0) is guaranteed no worse than a tiebreaker appearance after a 9-8 win over Julie Tippin.

The top three rinks in the nine-team fields make the playoffs.

Carey gave up a four-point second end to Tippin but chipped away at the deficit, eventually stealing three points in the 10th for the win.

"Definitely lucky to pull that one out but we'll take it," Carey said.

A visibly frustrated Tippin, from Woodstock, Ont., did not stop to speak with reporters after the game. 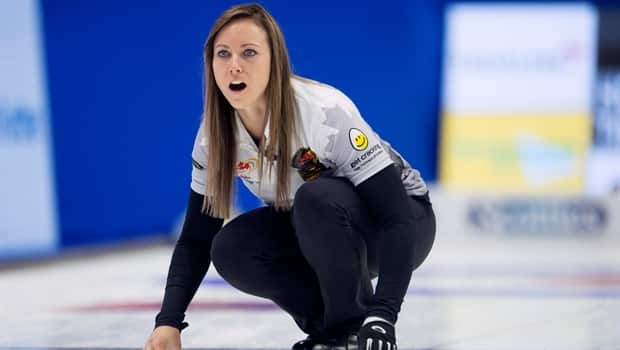 Ottawa's Rachel Homan beat Edmonton's Val Sweeting 7-5 in the evening. Homan was alone in second place at 6-1 and Sweeting was knocked out of the playoff mix at 3-4.

Krista McCarville of Thunder Bay, Ont., improved her playoff chances with a 5-3 win over Jennifer Jones of Winnipeg. Jones was in third place at 5-2 and McCarville was fourth at 4-2.