France's Tessa Worley capitalized off the mistakes of her counterparts to capture first place in a women's World Cup giant slalom on Tuesday in Kronplatz, Italy.

French veteran Tessa Worley took advantage of second-run errors from the early leaders to win a World Cup giant slalom Tuesday in a combined time of two minutes 11.38 seconds on a challenging course with a name, Erta, that lives up to its meaning — steep.

Moving up from fifth after the opening leg, Worley finished 0.27 seconds ahead of Lara Gut-Behrami and 0.73 ahead of Marta Bassino, this season's giant slalom leader.

Worley had a flawless second run and was pushing the entire way.

"This place is incredible and very challenging, a beautiful GS for women," Worley said from Kronplatz, Italy. "The second run I really gave everything. It was dark, it was bumpy, it was great." 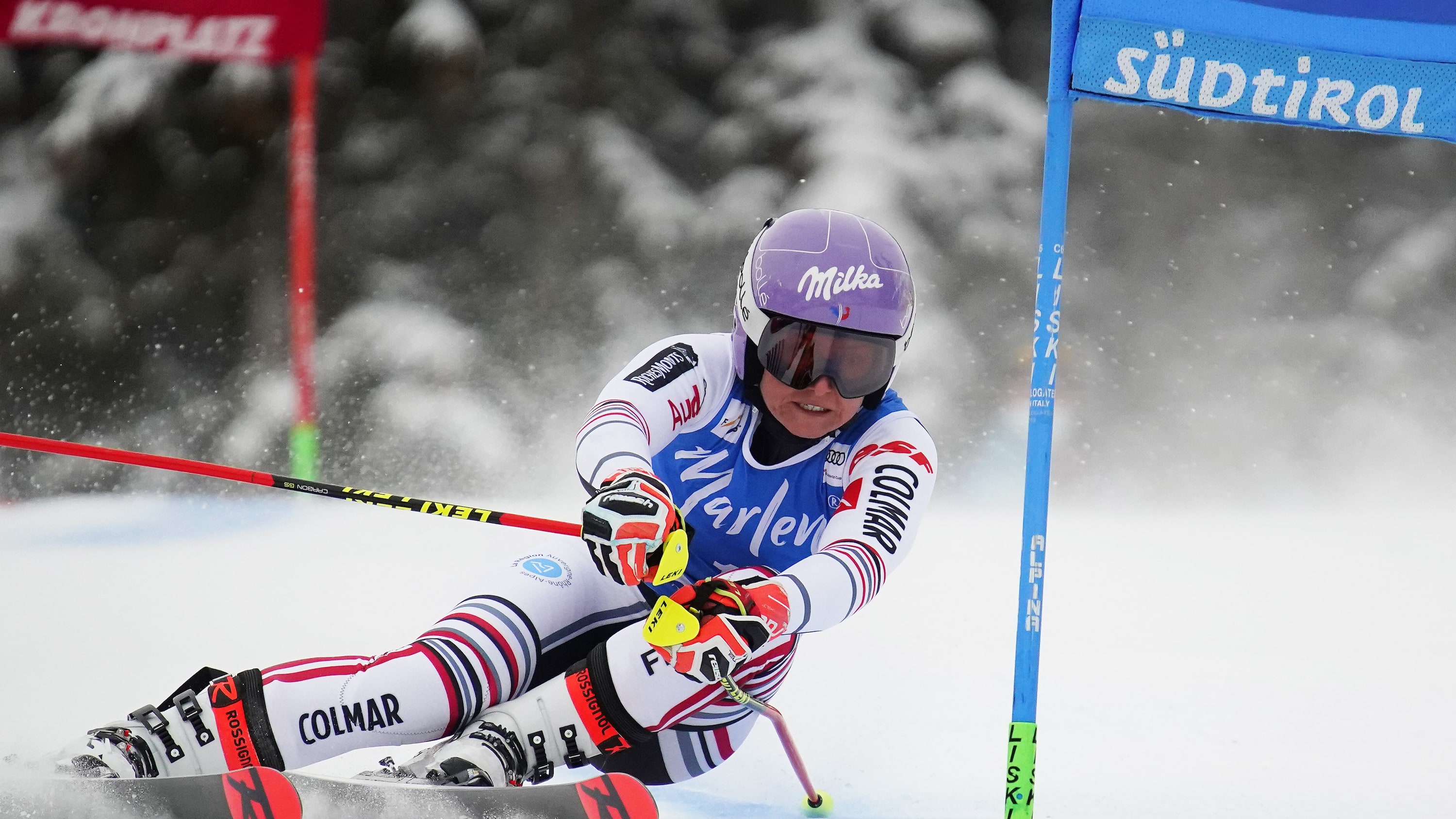 1 month ago
1:50
French veteran Tessa Worley took advantage of second-run errors from the early leaders to win a World Cup giant slalom on Tuesday in Italy. 1:50

Worley also claimed world championship gold medals in GS in 2013 and 2017, but her previous World Cup victory came back in 2018 at the season opener in Soelden.

It was already going to be a special day for Worley with longtime boyfriend Julien Lizeroux skiing in the final World Cup race of his career in Schladming, Austria.

Shiffrin dropped from second to fourth, a distant 1.08 behind Worley, while Gisin came sixth after holding a big lead over the entire field after the first run.

"Congrats to these girls for putting on an impressive show," Shiffrin wrote on Instagram. "Gonna go shake the rattle out of my brain now."

Canada's Val Grenier didn't advance to the second run for the first time in her World Cup career after a missed gate spoiled what was a strong first run. Teammate Cassidy Gray finished 42nd in the opening run and didn't qualify for another.

Overall leader Petra Vlhova struggled in both runs and finished 12th. Still, Vlhova holds a 100-point lead over Gisin in the overall standings.

The second run was made more difficult by a contrast in light, with the top half of the course bathed in sunshine and the steeper bottom part in the shade and much darker.

It was the third consecutive podium result for Gut-Behrami, the 2016 overall champion, after coming second in a downhill and first in a super-G. Gut-Behrami's previous podium in GS came more than four years ago. She's now just 136 points behind Vlhova in the overall standings.

Bassino, who claimed her sixth podium result of the season, is fourth overall and 168 points behind Vlhova.

No spectators were allowed at the race because of a nationwide ban on attending sports events in Italy amid the coronavirus pandemic.

The women's circuit moves to Garmisch-Partenkirchen for a downhill and super-G this weekend — the final races before the world championships open in nearby Cortina d'Ampezzo.

"I'm entering the worlds in good form," Bassino said. "I've been skiing well since the start of the season. I'm going to arrive ready and I hope to have a good time."