For the second time in three days, Beat Feuz triumphed in a race that he had unsuccessfully tried to win for a decade.

The back-to-back wins came after Feuz, who first raced here in 2010, finished runner-up in the traditional race four times in the past five seasons.

WATCH | Beat Feuz prevails in men's downhill by 17-100ths of a second: 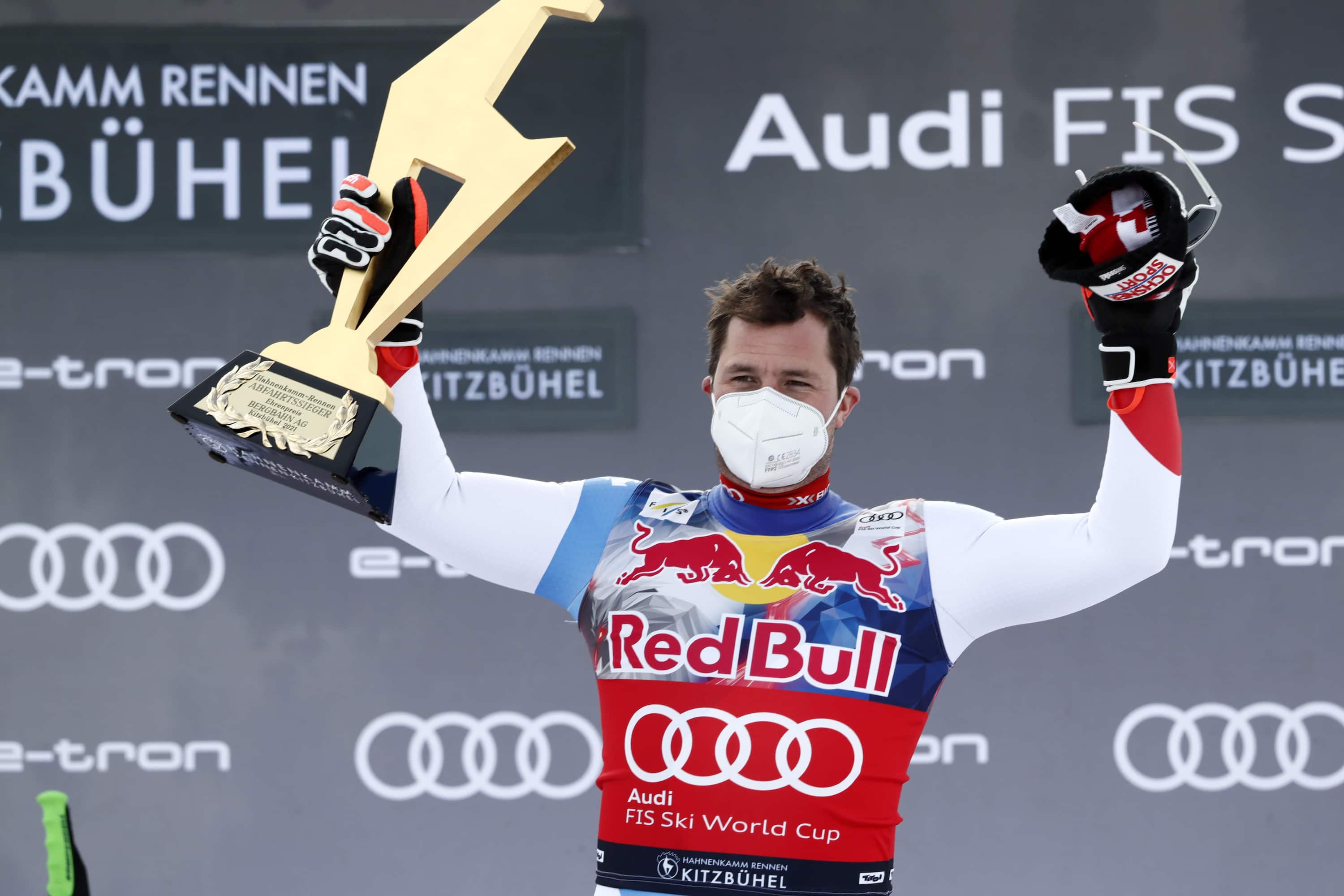 Feuz skis to back to back downhill wins at Kitzbuhel

No Swiss skier had won Austria's signature ski race since Didier Cuche earned the last of his five victories here in 2012.

Sunday's race was interrupted for a few minutes because of flat light as low clouds moved in just before Feuz was set to start.

Not distracted by the additional waiting time, he excelled mainly in the bottom part of the course as he beat Johan Clarey by 0.17 seconds.

"The run was good, but I didn't think at the finish it could be enough," Feuz said.

Clarey, 40, oldest skier ever on podium

The Swiss 2017 world champion trailed Clarey's time by 0.42 midway through his run before he mastered the final section.

The 40-year-old Frenchman, who was already the oldest downhiller to score a top-three result, became the oldest skier on a podium at any event in the 54-year history of the World Cup.

"A victory would be better but I am behind the best downhiller of the past five years," said Clarey, who has eighth career podiums but has never won a World Cup race.

In the final training session Thursday, Clarey crashed at full speed into the boarding near the finish, but he escaped uninjured and finished fourth in the race the next day.

Austria's Matthias Mayer, who won the race last year and came runner-up to Feuz on Friday, finished 0.38 behind in third.

While Friday's race on the same course was marred by bad crashes involving Swiss skier Urs Kryenbuhl and Ryan Cochran-Siegle of the United States, only three of 52 racers failed to finish Sunday's downhill and all avoided injuries.

Organizers had lowered the final jump, where Kryenbuhl crashed in Friday's race, which had been rescheduled from another iconic resort, Wengen in Switzerland.

1st downhiller with 2 wins this season

As skies cleared again in Sunday's event, some late starters had clearer visibility and came close to the times of the top-ranked racers, most notably Florian Schieder.

The Italian, wearing bib No. 50, led Feuz by more than a quarter of a second for the first four splits but ultimately finished 1.43 seconds behind in 14th.

The result made Feuz the first downhiller to win two races this season, after Martin Cater of Slovenia, overall champion Aleksander Aamodt Kilde and Mayer won the other events.

Feuz and Mayer went 1-2 in the season standings with Kilde in fourth, though the Norwegian is out for the season after damaging his knee in a training crash a week ago.

Feuz won the season-long downhill title the past three seasons.

"I don't look back at results, I am just enjoying the way I am skiing again now," said Feuz, who was 10th in the previous downhill, in Italy in December.

The race in the Austrian Alps is one of the marquee events on the men's World Cup calendar and is usually attended by up to 50,000 spectators, though no fans were allowed this year amid tight anti-coronavirus measures.

The race was postponed by a day because of bad weather Saturday, pushing back the initially scheduled super-G to Monday.

There will be one more World Cup downhill, in Garmisch-Partenkirchen on Feb. 6, before next month's world championships in Cortina d'Ampezzo.