Mikaela Shiffrin set yet another milestone on Saturday, clinching a record 15th World Cup victory of the season in Spindleruv Mlyn, Czech Republic.

American could tie Ingemar Stenmark's slalom mark with No. 40 next weekend

Mikaela Shiffrin set yet another milestone on Saturday, clinching a record 15th World Cup victory of the season in Spindleruv Mlyn, Czech Republic.

Returning to the resort where she started her World Cup career at the age of 15 in 2011, Shiffrin dominated the last slalom before next week's finals.

No other skier, male or female, has won more than 14 races in a single campaign in the 53-year history of the World Cup.

The American will likely get three chances to further improve the best mark as she is expected to compete in Thursday's super-G and next weekend's slalom and giant slalom at the World Cup Finals in Andorra. 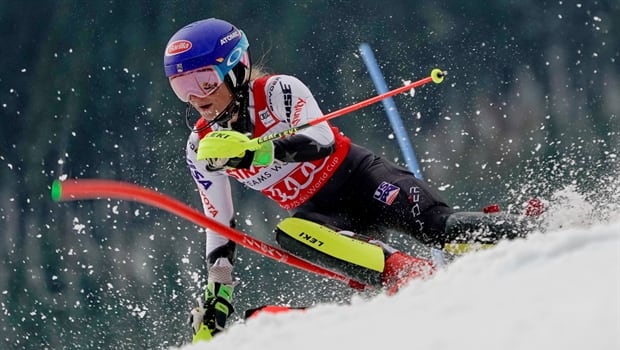 2 years agoVideo
0:45
Mikaela Shiffrin of the United States wins slalom event in Czech Republic, no other skier has won more than 14 races in a single campaign in the 53-year history of the World Cup. 0:45
Shiffrin had already wrapped up the World Cup slalom season title, her sixth in the last seven years, and her third straight overall championship.

Saturday's win was Shiffrin's 39th in slalom, leaving her one short of the 32-year-old World Cup record held by Swedish great Ingemar Stenmark.

'It was fun to ski, both runs'

A day after finishing third in a GS, Shiffrin went back to winning. She built on her first-run lead to beat Wendy Holdener by 0.85 seconds. It was Holdener's 21st career podium in the discipline but the Swiss skier has yet to win a race.

"Yesterday … I felt disappointment from the first [run]," Shiffrin said. "So today I wanted to not protect something, like ski with risks, ski to fight, and see what was possible. It was really fun to ski, both runs."

Slovakia's Petra Vlhova, the only skier other than Shiffrin to win a women's World Cup slalom since January 2017, was more than two seconds behind in third.

Katharina Truppe of Austria posted the fastest second-run time to climb from 16th to fourth.

Olympic champion Frida Hansdotter, who was third after the opening run, dropped to seventh, trailing Shiffrin by 2.80 seconds. This week the Swede skier announced her retirement after the season.

Shiffrin positioned herself for the record win by leading the opening run in tough conditions.

In dense snowfall, Shiffrin was 0.37 seconds faster than Holdener, while the rest of the field was left with more than a second to make up in the decisive leg.

Catching a patch of soft snow immediately after finishing her opening run, Shiffrin lost balance and fell, calling it "a little bit dangerous" and prompting course workers to clear the fresh snow from the finish area.

In the final run, Shiffrin struggled at the third gate and had her lead over Holdener reduced to 0.26, but she skied cleanly for the rest of her run, steadily extending her advantage again with every split time.

It was the last women's race before the World Cup Finals, which start with the downhill on Wednesday.