Mikaela Shiffrin has won her fifth slalom globe in the last six seasons. The American wrapped up the title after victory in the penultimate women's World Cup slalom on Saturday.

Mikaela Shiffrin added a second crystal globe in as many days to her ever growing collection on Saturday.

A day after locking up her second straight World Cup overall championship, the American secured her fifth season title in the slalom in Ofterschwang, Germany.

Shiffrin formally won the discipline title as soon as the only remaining challenger, Petra Vlhova, failed to get the top-two result which the Slovakian skier needed in the penultimate event of the season.

However, Shiffrin wrapped up the title in style by winning the race, edging Wendy Holdener of Switzerland by 0.09 seconds. Olympic champion Frida Hansdotter of Sweden was 0.72 behind in third, and Vlhova finished fourth. 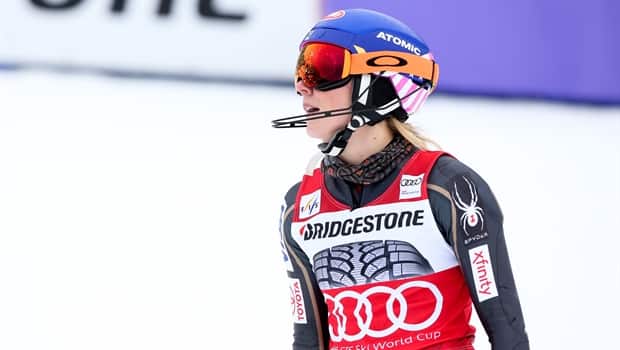 "I was happy yesterday but I was still thinking how I could prepare best for the race today and what I needed to do to come out and be motivated and ski really fast again," said Shiffrin, who finished third in Friday's giant slalom on the same hill to secure the overall title before skipping the public bib draw in the evening.

"It's a big challenge to do that at the end of the season but Wendy really wants to win, Frida is coming off her gold medal in slalom in South Korea, so everybody has her own motivation," Shiffrin said.

Saturday's result stretched the American's lead over Vlhova in the slalom standings to 225 points with just the season-ending race at the World Cup finals in Sweden remaining.

It was the American's fifth slalom title in the past six seasons after only failing to win the discipline in 2016 when she missed five races due to a knee injury. Only Swiss great Vreni Schneider won more slalom titles in her career — six.

Shiffrin, who turns 23 on Tuesday, set a World Cup record on Saturday as she became the first 22-year-old skier, male or female, with 42 World Cup wins.

Shiffrin was planning to take a few days off before flying to Are and compete in the last GS and slalom races of the season, with nothing more at stake than just the race win.

"It's still my goal to finish the season as strong as I can," Shiffrin said, adding she would "try to have some fire" for the final races of the season.

On a course set by her coach Mike Day, Shiffrin was the fastest in the opening run of Saturday's slalom, leading Austrians Katharina Gallhuber and Bernadette Schild by 0.30 and 0.39 seconds, respectively.

While the Austrians dropped to fifth and sixth in the final run, Holdener put pressure on Shiffrin by posting the fastest time.

The American lost fractions of her lead at every split time but the margin was still 0.09 to her advantage when she crossed the finish, denying Holdener a maiden slalom victory once more.

The Swiss skier has racked up 16 podiums in the discipline but is yet to win a race — a record in the women's World Cup.

Both hampered by recent knee injuries, Austria's Michaela Kirchgasser and Slovakia's Veronika Velez Zuzulova retired from the sport on Saturday. Wearing clothes inspired by folklore, they used the opening leg for a farewell run at a leisurely pace while hugging coaches along the way.

For more alpine skiing action, watch Road to the Olympic Games on Saturday at 1 p.m. ET, our weekly show spotlighting the best high-performance athletes from Canada and around the world.