Thomas Dressen won the men's World Cup downhill on the Kandahar course on Saturday in Garmisch-Partenkirchen, Germany, becoming the first German winner of the classic race in 28 years.

Thomas Dressen won the men's World Cup downhill on the Kandahar course on Saturday in Garmisch-Partenkirchen, Germany, becoming the first German winner of the classic race in 28 years.

No German skier had been on the podium here since Markus Wasmeier triumphed in January 1992.

"It's brutal that it's been so long ago," Dressen said. "For me this is a dream. Winning Garmisch is really cool for us Germans."

Dressen was especially strong on the bottom part of the course. While several rivals led the German's time at the last split, none of them mastered the finish section as smoothly as he did. 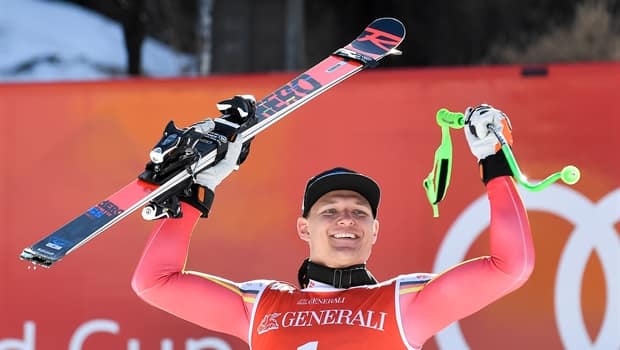 Norway's Aleksander Aamodt Kilde finished 0.16 seconds behind in second, followed by Johan Clarey in third. The Frenchman, who was the fastest in Friday's training run, trailed Dressen by 0.17.

World Cup downhill leader Beat Feuz, who was on the podium in 17 of the previous 19 downhills, finished sixth.

The Swiss skier still extended his lead in the discipline standings, as runner-up Dominik Paris is out for the season with a knee injury and third-ranked Matthias Mayer skipped the race because of illness.

Feuz currently holds a lead of 136 points over Paris, 213 over Kilde, 214 over Dressen, 216 over Kriechmayr and 220 over Mayer, with four downhills remaining this season.

It was Dressen's second triumph of the season and fourth overall, and came two years after he won in Kitzbuehel. That was the first German victory in any men's World Cup downhill in 13 years.

Dressen missed almost the entire 2018-19 season after tearing the ACL in his right knee in Beaver Creek, Colorado, in November 2018, but he returned a year later by winning in Lake Louise, Alberta, in the first downhill of the new season.

Dressen got two more podium results this season, most recently in Wengen, Switzerland, where he finished third two weeks ago.

However, he only placed 26th in Kitzbuehel last Saturday.

"After Kitzbuehel I was pretty angry. I took too many risks there, wanted to force a good result," Dressen said. "For this race, I wanted to be more relaxed, to have fun at the start, and to enjoy the race."

It was the fourth straight downhill with a winner from the home nation, after Paris won in Bormio, Feuz in Wengen and Mayer in Kitzbuehel.

The race took place in perfect, sunny conditions, but on a shortened course after the only training run on Friday was held from a lowered start.

FIS rules forced organizers to use the reserve start also on Saturday as the top section had not been part of the mandatory training session.

It was the final race for two-time World Cup downhill champion Peter Fill, who announced his retirement last week. The 37-year-old Italian skied down at a leisurely pace while waving goodbye to coaches and spectators alongside the course.

Fill won the downhill season title in 2016 and 2017, and the Alpine combined title the following year. He also won silver in super-G and bronze in combined at world championships.

A giant slalom is scheduled for Sunday.

For more alpine men's coverage, tune into Road to the Olympic Games on Saturday at 2 p.m. ET.