Over 25,000 runners from 70-plus countries, including several elite Canadians, are expected to take part in Sunday's 29th edition of the Toronto Waterfront marathon, half marathon and five-kilometre event that will be lived streamed at CBCSports.ca at 8:45 a.m. ET.

Reid Coolsaet believes it's his first chance at a "decent" marathon performance in about two years.

The two-time Olympian, who will compete in the 42.2-kilometre Toronto Waterfront race on Sunday (CBCSports.ca, 8:45 a.m. ET) for a third time, has struggled to regain the form that allowed him to finish 46 seconds shy of Jerome Drayton's 43-year-old Canadian record at the 2016 Fukuoka Marathon in Japan.

"I'm looking forward to seeing how my body reacts to the tough parts of the [Toronto] race, which for me is between 32 and 38 kilometres," says Coolsaet, who won the Rochester Half Marathon in 1:07:31 last month after capturing the third annual Toronto Waterfront 10K in June. "It's been a while since I've been able to push [the pace] properly toward the end of the marathon.

"For the most part, training has gone well since the Boston Marathon. I reached 209 kilometres one week, had several weeks above 180, but I didn't progress as much as I wanted the past two weeks because I was sick."

Coolsaet is certain he won't lower his personal-best time of 2:10:28 from the 2015 Berlin Marathon, but is still motivated to press for a good clocking. He's also excited for fellow Canadian Cam Levins, one of two runners in the elite men's division making their marathon debut.

Sunday's 29th edition of the Toronto Waterfront marathon, half marathon and five-kilometre event is expected to attract more than 25,000 runners from more than 70 countries, according to race director Alan Brookes.

"We're one of only 36 IAAF Gold Label marathons in the world," he says. "For the first time, we are hosting the world Masters Athletics Championships that will see some of the best 35-plus marathoners on the planet racing Toronto's streets."

Adds Coolsaet: "The race is attracting bigger names and more people around the world are tuning in. The level of athlete competing is just getting better every year."

It's race week in Toronto!<br><br>Are you in town racing the STWM Marathon, Half or 5k? Or even just cheering on friends and family? Then come join me for a shake out run at 9 am this Saturday, from the brand new ASICS store on Queen's and Spadina! <a href="https://t.co/m2Aox1nYaa">https://t.co/m2Aox1nYaa</a> 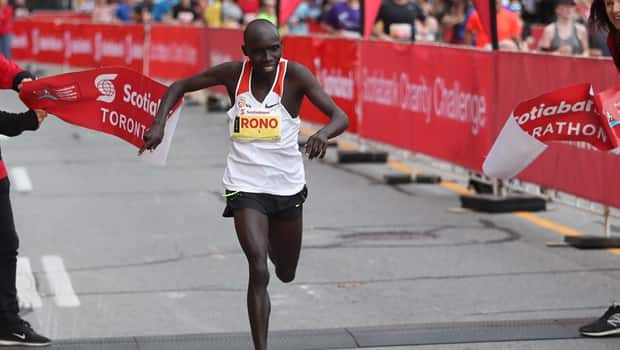 3 years agoVideo
2:00
Rono crossed the finish line at 2:06:51 to defend his title and set a new record for the fastest marathon run on Canadian soil 2:00

About 25 per cent of Sunday's participants will be running to raise money for one of 191 official charities in the Scotiabank Charity Challenge to help create a stronger future for young people.

Two of them, Evan Latsky and Blaine Penny, will also attempt to break Guinness World Records.

Latsky, who will run in support of Right to Play, will need to run 2:04:20 to become a Guinness title holder for the fastest half marathon runner dressed in hockey gear, minus the skates, and plans to carry a stick to complete the look.

Penny, an accomplished runner with a 2:29 marathon PB, will try to be the fastest marathoner dressed as a battery while generating funds for the MitoCanada Foundation, which helps those who live with mitochondrial disease to enjoy the best possible quality of life until there is a cure.

Mitochondrial disease is a group of disorders that affect parts of the body that require lots of energy to function such as the brain and muscles. Penny, the CEO and co-founder of MitoCanada, must break the four-hour mark in Sunday's race, primarily run along Lakeshore Blvd. with views of Lake Ontario.

Leslie Sexton: She won the Canadian women's title last year in 2:35:44. The 31-year-old from London, Ont. has her eye on qualifying for the 2020 Olympics in Tokyo.

Krista DuChene: In April, the mother of three put on a late charge in the rain, cold and wind of the Boston Marathon, finishing third in a time of 2:44:20. DuChene, 41, followed that effort with a 1:18;02 clocking at the Edmonton half marathon in August.

Kinsey Middleton: An American-Canadian dual citizen, the 25-year-old former University of Idaho runner is making her Toronto Waterfront Marathon debut. She ran a season-best 1:12:30 in the half marathon at Houston in January.

Marta Megra: In her Toronto marathon debut a year ago, Megra of Ethiopia prevailed in 2:28:17. Expected to push the 27-year-old this year is fellow Ethiopian Amane Beriso, who brings a 2:20:48 PB to Toronto.

Stephen Kiprotich: The Ugandan star tells ESPN he's in "fine form" after placing fifth at the Haspa Hamburg Marathon in Germany on April 29. Kiprotich, 29, is the first Olympic champion (2012) to compete in the Toronto race.