Track and field's world governing body says its new testosterone-restricting rules are designed to ensure a level playing field. But are there darker factors at play in the battle against Caster Semenya and athletes like her?

Racial, cultural bias playing a role in the battle against the South African track star

Earlier this month, South African runner Caster Semenya continued her dominance of the women's middle-distance events, winning the 1,500 metres by more than a second at a Diamond League meet in Doha. 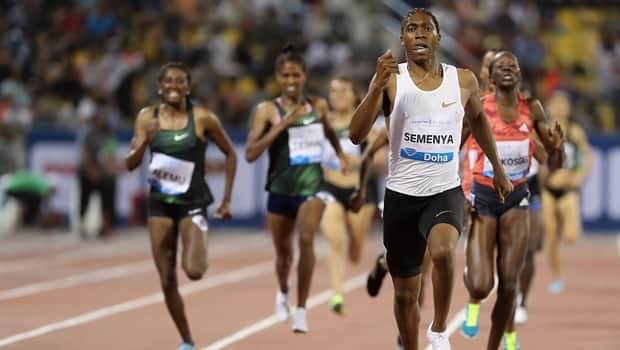 3 years ago
7:27
Semenya won the women's 800m race at the opening Diamond League event in Doha. Under a new and controversial rule, Semenya will be forced to suppress her hormone levels in order to compete, beginning November 1. 7:27

It was a familiar spot for Semenya. Since bursting onto the world track scene in 2009, she has captured two Olympic titles and three world championships in the 800 metres while also starring in the 1,500. She won both events at last month's Commonwealth Games.

The race in Doha was the first time she had been on the track since the latest attempt by track's world governing body to regulate the testosterone levels in athletes like Semenya.

Though she has identified as a woman her entire life, the 27-year-old Semenya is also considered intersex, meaning she was born with a reproductive or sexual anatomy that does not conform to traditional definitions of male or female. She has a medical condition known as hyperandrogenism, characterized by elevated levels of male sex hormones — such as testosterone — in the female body.

Since testosterone is one of the key ingredients contributing to an athlete's strength and speed, many feel Semenya has an unfair advantage in her sport.

Under the new rules, which take effect in November, the International Association of Athletics Federations wants to create a special category for athletes who have what it calls differences of sexual development (or DSD). These athletes would have to reduce (and maintain) their natural testosterone levels to no greater than five nanomoles per litre of blood in order to participate in women's track events ranging from 400 to the mile.

The IAAF maintains the move is premised on the principle of athletic fairness.

"We want athletes to be incentivized to make the huge commitment and sacrifice required to excel in the sport, and to inspire new generations to join the sport and aspire to the same excellence," said IAAF president Sebastian Coe.

But the science has never fully backed up the IAAF's claim that so-called DSD athletes have a massive advantage in women's races. In 2012, Indian sprinter Dutee Chand appealed a similar rule restricting testosterone levels to the Court of Arbitration for Sport. The court ruled the regulation was discriminatory and it was suspended.

The IAAF was given time to come back and show that elevated testosterone levels result in a male-like advantage of 10 to 12 per cent. The track body's latest research says athletes like Semenya enjoy a "competitive advantage" but still fails to demonstrate that even a 10 per cent edge exists. And the supposed advantage is based on data from a 2018 study that has yet to be published or reviewed.

So if the data still doesn't appear to be there, what is this really about? Are there other factors driving Semenya's critics?

'This is a racist, targeted test'

Some supporters of Semenya believe two of the factors may be race and geography. They wonder if the IAAF would have pursued Semenya for nearly a decade if she were a white runner from the global North.

"All of these [efforts] seem to coincide with the recent dominance by women from Sub-Saharan Africa in certain track and field events, and that wasn't the case before," says Katrina Karkazis, a Stanford University bioethicist who was involved in the Chand case and has written extensively about intersex issues. "That is one way this is racialized. Who is winning those events? Who has won historically?"

University of Toronto professor Bruce Kidd is a longtime member of the Olympic movement and was also involved in the Chand case.

"They [the IAAF] have identified seven events where they think there is a correlation [between testosterone levels and performance]. Two of them are the pole vault and hammer throw and they have not made them part of this new rule, and those are events that are dominated by white women," Kidd points out. "They have targeted the mile, an event that is currently dominated by black women. And the mile isn't even part of their study. It's hard not to draw the conclusion this is a racist, targeted test."

Semenya's success and physical appearance — she appears more muscular than many of her rivals — have drawn attention and doubt from track officials.

"She is a woman, but maybe not 100 per cent," IAAF General Secretary Pierre Weiss famously said in 2011, shortly before the IAAF introduced its initial regulations aimed at athletes with elevated levels of natural testosterone.

It's not just the governing body going after Semenya. Some of her competitors and other high-profile members of the running community have questioned whether it's fair to have to compete against Semenya and other athletes with a similar body type.

Take the women's 800 race at the Rio Olympics. Semenya won by more than a second. Burundi's Francine Niyonsaba took the silver and Kenya's Margaret Wambui captured the bronze. Both Niyonsaba and Wambui have muscular bodies like Semenya's.

"These colleagues have a very high testosterone level, similar to a male's, which is why they look how they look and run like they run," said Poland's Joanna Jozwik, who finished fifth, one spot behind Canada's Melissa Bishop.

"[Bishop] improved her personal best and was fourth. It's sad, and I think she should be the gold medallist. I'm glad I'm the first European, the second white," Jozwik added.

"On my way to the stadium I was walking behind Wambui, who is three times bigger than me. How should I feel? She has a big calf, a big foot, she makes a step like three of my steps."

Marathon world-record holder Paula Radcliffe, who testified against Chand before the CAS, added at the time that Semenya's dominance of the 800 metres is "no longer sport."

"Girls on the start line know they're never going to get a medal in an 800m. That's the bottom line. I get really annoyed when I see these arguments come back that it's racist or it's sexist. It's none of those," Radcliffe said.

Payoshni Mitra, an India-based scientist and athlete`s rights activist who was instrumental in the Chand appeal, says Radcliffe and Jozwik are repeating a common refrain.

"There has been this discourse for a long time where it has been said again and again that sex testing is required," Mitra says. "So if you have been hearing this for a long time, that's what you start believing in. Nobody has explained that there is not much scientific evidence to prove this."

Kidd says that, in the absence of indisputable scientific evidence, officials and competitors have instead focused on Semenya's appearance. Her thick limbs, broad shoulders and strong jaw set her apart from the traditional beauty ideals of Western Europe and North America.

"On the men's side we celebrate differences. We encourage nations to send athletes regardless of how they look, their size and shape, and we celebrate those athletes who are at the extreme, the outliers," he says.

"In women's sport, the dominant discourse is that woman should look like the European, North American, Caucasian expectation of femininity and that they should conform to a hormonal requirement that belies the science and is not expected of the men."

Science and race aside, Kidd finds it ironic that this is being framed as an issue of fairness and creating a level playing field. He says the opportunities for Semenya to develop and hone her craft growing up in rural South Africa were far harder to come by than they are for many Western athletes.

"If the world of sport is going to look at factors that are strongly correlated with outstanding performance and medals, they should first look to personal and national income before anything else," Kidd says. "Look at any medal table. It's lined up in favour of the richest countries and the richest families from those countries."

"The kind of facilities that athletes like Paula Radcliffe enjoy are in no way comparable to any of these other athletes, even Caster, who is the best South Africa has got," Mitra says. "Paula has had tremendous training support. She could go train in higher altitudes, she had a big number of support staff moving with her from one competition to another.

In her native South Africa, a country with a deep history of racial inequality, Semenya's story has resonated.

"These new regulations infringe on the human rights of athletes, targeting mainly those in East Europe, Asia and the African continent," reads a statement from the African National Congress. "The racial undertones of this cannot go unnoticed.

"The regulations are a painful reminder of our past, where an unjust government specifically legislated laws for certain activists in society to stifle their fight against an unjust system."