Holds off American Alyssa Wilson with throw of 64.90 metres at IAAF event

The 19-year-old's first of five completed throws of 64.90 metres stood up as the furthest in the field of 13 competitors at Tampere Stadium. 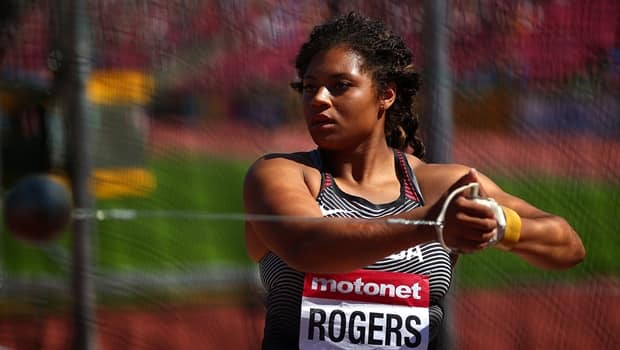 2 years agoVideo
1:02
Canadian Camryn Rogers takes gold after her first throw of 64.9m in the hammer throw stood as the best at the IAAF World U20 Championships. 1:02

"This feels really special," Rogers told reporters. "I think the thought of me being the world champion will really hit me later."

American Alyssa Wilson threatened to take the lead with throws of 64.14 and 64.45 on her second and third attempts, respectively, but had to settle for a silver medal. Yaritza Martinez of Cuba was third with a top throw of 63.82 in the closest-ever finish in women's hammer throw at U20s.

Wilson, who won bronze at the U20 event two years ago in Bydgoszcz, Poland, was pleased with her strong performance to end a week that also saw the Jackson, N.J., native foul out of the shot put final and place a distant 10th in discus throw.

"It was nice to have a comeback and throw pretty well today," said the UCLA athlete.

Rogers, who hails from Richmond, B.C., won gold at the PanAm U20 Games in Peru last July with a meet-record throw of 63.42.

A standout freshman this year at the University of California-Berkeley, Rogers placed third at the Pac-12 Championships (64.25) and twice broke the school record in April. The second time, Rogers' personal-best 65.61 moved her second to 2016 Olympic bronze medallist Sophie Hitchon of Great Britain.

On Thursday, Rogers hit the qualifying mark on her first and only attempt, throwing 62.99, only to learn later it was ruled a foul. However, the jury of appeal allowed Rogers to advance since she had only made one throw.

One of four returning athletes on this year's 32-member Canadian squad, she took the early lead from world U18 champion Amanda Almendariz (61.82) of Cuba before Wilson, the world U20 leader, threw 64.14 in Round 2.

CBC Sports is providing a free live stream through to the end of the championships on Sunday.