Canadian sprinter and 2016 Olympic triple medallist Andre De Grasse is ready to make up for missing the 2017 world track and field championships due to injury, believing he can establish personal-best times in Qatar, starting Saturday.

Andre De Grasse became a household name in 2016, sprinting his way to three medals at the Rio Olympics.

He was suddenly famous, and with a $11.25-million US sponsorship deal with Puma in his pocket, he was rich.

He was also young, just 21 when he arrived home from Brazil with one silver and two bronze. He admits now, in the wake of that success, he wasn't always diligent when it came to health and nutrition.

"Sometimes I would come home and grab a burger or something on the road at a drive-thru," recalls De Grasse, now 24, as he prepares to run the 100 and 200 metres as well as the 4x100 men's relay at the upcoming world championships in Doha, Qatar. "I probably took a lot for granted. I was young [but] had to mature, this was my job now. I couldn't be slacking and I definitely didn't want to keep getting injured. I had to play a better role [in my health]."

De Grasse strained his right hamstring during a training run just days before the start of the 2017 track and field world championships in London. And his 2018 season ended in July when he re-injured the hamstring at the Canadian championships. 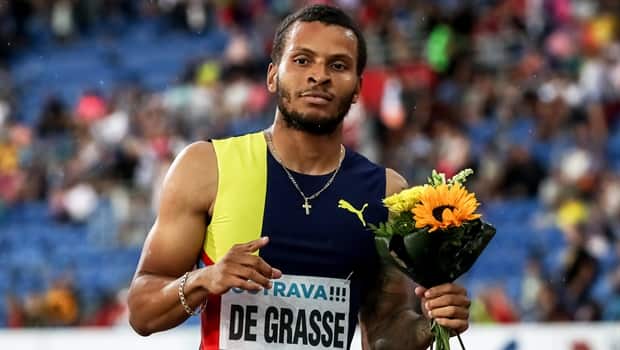 The injuries played a part in splitting from Canadian coach Stu McMillan of the Phoenix-based ALTIS training group last fall and moving to Jacksonville, Fla., to work with American sprint guru Rana Reider, who has helped De Grasse regain confidence and lower his times to near-personal-best levels.

Nowadays, De Grasse either prepares his own meals or his girlfriend Nia Ali and his mother, when she pays a visit, will cook for him.

"I take a lot more things seriously now," he says, citing his improved sleep habits, nutrition, recovery from races, staying hydrated and regular physiotherapy treatments. "I was young [but] I'm not eating out as much [now] or snacking on junk food.

"I had to sacrifice some things and not be out late so I was ready for the next training day. Now, I'm getting 10 hours of sleep, and more, when possible." 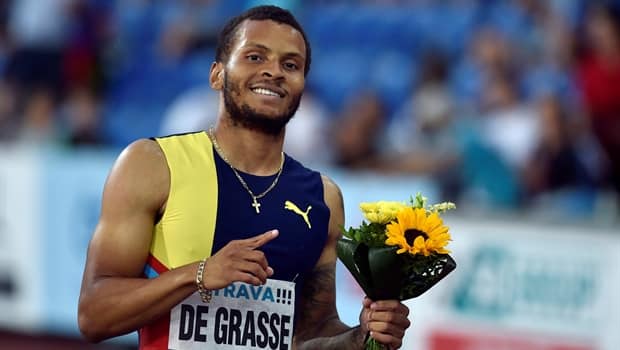 De Grasse believes he can establish new personal bests in Doha, where he will try to carry the momentum from a "consistent" 9.97 performance on Sept. 1 at the Berlin World Challenge.

"All my starts this season have been shaky and I haven't been able to get out with the field," De Grasse says, "but I was able to get out of the [starting] blocks well and maintain my speed.

He has been quite consistent lately coming out of the blocks. ... I like his confidence and where he's at.— CBC Sports track analyst Donovan Bailey on sprinter Andre De Grasse

"I just have to stay patient and when I hear the [starter's] gun just react and push. If I do that, I'll be in the mix [for a medal]."

WATCH | Andre De Grasse: 'This is the time I gotta be consistent' 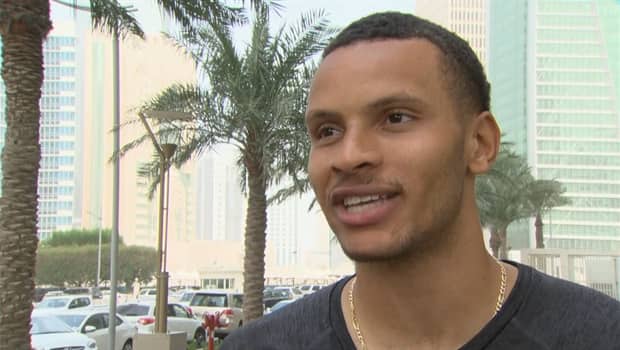 Donovan Bailey, who won the men's 100 final at the 1996 Olympics in world-record time, believes De Grasse has the potential to reach the podium "and even win" in Doha.

"He knows how to put himself in position to make the final and leave it all out on the track," says the CBC Sports track analyst. "He has been quite consistent lately coming out of the blocks, transitions well and relaxes [in the final metres] of the race. I like his confidence and where he's at."

American Christian Coleman, having posted a 9.81 world-leading time this season on June 30 at the Prefontaine Classic, is the favourite in Doha. But he hasn't run the 100 since his victory at the U.S. championships on July 26 and recently faced a possible sanction for three "whereabouts failures" over a 12-month period before the U.S. Anti-Doping Agency dropped his case for missed doping tests on a technicality. 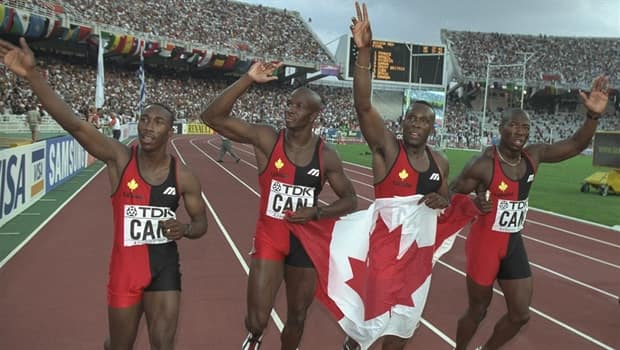 Canadian moments to remember from the track and field worlds

1 year agoVideo
3:03
From Donovan Bailey, to Perdita Felicien, to Andre De Grasse, Canada has had flashes of glory at the track and field world championships. 3:03
"We'll see how he handles the pressure," Bailey says, "especially after the recent bad publicity. We'll see how strong psychologically he is. If he knows he wasn't guilty, he can forget about what happened."

Reigning world champion and fellow American Justin Gatlin has the fourth fastest time this year at 9.87 but he pulled up with a suspected left hamstring or thigh injury on Sept. 3 at the Zagreb World Challenge in Croatia and might not be at full health in Qatar. 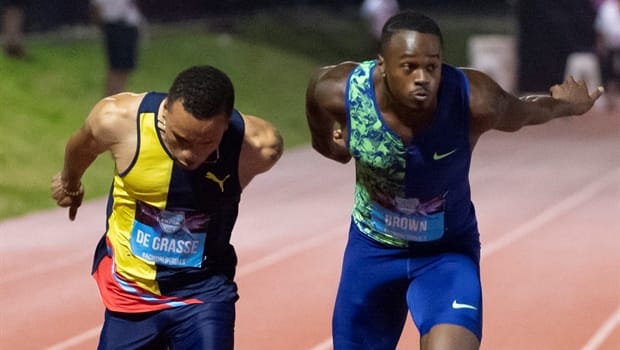 1 year agoVideo
0:21
Aaron Brown edged Andre De Grasse in a photo finish to capture his second consecutive 100-metre title at the Canadian track and field championships. 0:21
"I think Aaron needs to run as relaxed as he did in the semifinals at nationals," says Bailey. "I find sometimes in the Diamond League he's quite stiff and just needs to get out of the blocks and run the track like he owns it.

"He probably could have run 9.90 or faster at Canadian championships, but I don't want him putting too much pressure on himself or getting too nervous that he can't achieve that." 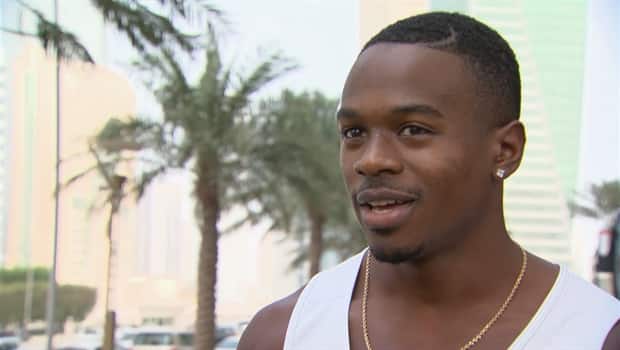 Aaron Brown on his confidence level heading into the world championships

1 year agoVideo
1:54
Canadian 100-metre & 200-metre champion Aaron Brown has had a great season so far and is aiming to keep up that momentum. 1:54
De Grasse, who clocked 19.87 in his most recent 200 to place third at the Diamond League Final in Brussels, spent much of his training working on his start.

"My speed is there so I have to make sure I'm holding my form and accelerating properly," he says. "I think I relaxed too much on the bend [in Brussels] and let [Noah] Lyles and [Ramil] Guliyev get away from me and I had to come back at the end.

"I have to try not to fall asleep at that point in the race, hit the gas and hold my form coming into the straightaway."

WATCH | The story of De Grasse and Coleman: 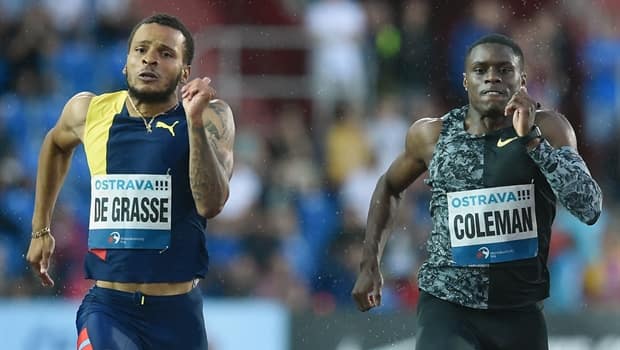 The Story of De Grasse and Coleman

1 year agoVideo
1:38
Despite following similar paths in their careers, Canada's Andre De Grasse and American Christian Coleman have yet to race each other professionally in the 100 metres.. CBC Sports' Anson Henry sets up the much-anticipated 100-metre showdown at the upcoming track and field worlds. 1:38

CBC Sports has exclusive live coverage of the 2019 World Track & Field Championships from Sept. 27-Oct. 6. View the stream and broadcast schedule here. To add the complete event schedule to your calendar, click here.