Canada’s Melissa Humana-Paredes and Sarah Pavan stormed to a gold medal finish at the inagural Edmonton Open on Sunday.

Canada's Melissa Humana-Paredes and Sarah Pavan stormed to a gold medal finish at the inaugural Edmonton Open on Sunday.

In a battle of top seeds, the Canadian duo had little trouble dispatching Americans Betsi Flint and Emily Day in straight sets (21-11, 21-16) to top the podium.

"It was so much fun to play in front of our home fans this week," said Humana-Paredes.

"It was easy to tell that everyone here really appreciates beach volleyball and we could feel it on the court in every match."

The victory comes as a cherry on top of what has already been a strong month for Toronto native Humana-Paredes and Pavan of Kitchener, Ont,.

Earlier in July the pair won gold at the world championships in Germany, and in the process, secured Canada a berth in next summers' Olympics. 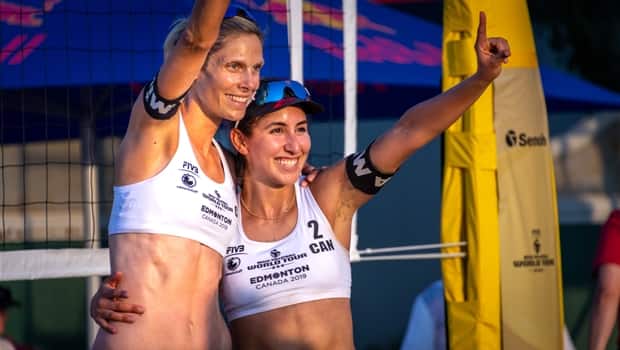 Though friendly with their American opponents off the court, Humana-Paredes and Pavan were all business in Edmonton. Having faced Day and Flint last October in Las Vegas – a match which they also won – the Canadians knew exactly what to expect, and provided yet another dominant performance.

The Edmonton Open is one of only two World Tour event stops in North America this year. The other will take place in Mexico from November 13-17.

Having already booked a spot in Tokyo 2020, Humana-Paredes and Pavan have elected to skip this year's Pan Am Games in Peru to focus instead on an upcoming Olympic test event.

In the men's gold medal match, Canada's Grant O'Gorman and Ben Saxton were in tough against Nico Beeler and Marco Krattiger of Switzerland.

While O'Gorman hails from Scarborough, Ont. the game was a provincial home-coming of sorts for Calgary native Saxton.

And to the delight of the crowd, the Canadians were able to battle back, after dropping the opening frame, to force a third-and-decisive set.

This was the second time this year that these teams have faced off in a FIVB World Tour event. The first was back in May in Brazil, when the Canadians were the ones who triumphed in straight sets (21-17, 21-17).

But in Edmonton, the day belonged to the Swiss who despite being seeded 10th, overcame some stiff competition, including the second-seeded American pair of Billy Allen and Stafford Slick with a straight sets (2-0 (25-23, 21-13) win in the semifinals before overcoming O'Gorman and Saxton to claim gold.