CBC Sports is providing a free live stream of King of the Court: Men's and Women's beach volleyball through to the finals on Sept. 12. 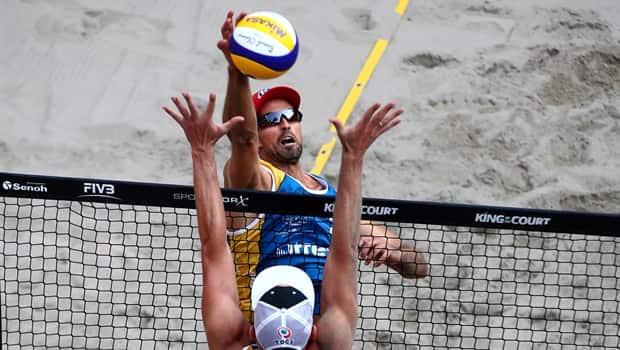 King of the Court Beach Volleyball: Men's and Women's Finals

Click on the video player above to watch King of the Court: men's and women's beach volleyball from the Netherlands.

A pre-match draw determines which team starts on the King's/Queen's side (the winner's side) of the court. The winner's side is defined by the gold outline. The challenger's side has a black outline.

Points are only counted if earned from the winner's side, so only teams in the King's/Queen's position can score points.

Each rally starts from the challenger's side, and they can choose which player will serve. There is no set rotation. Once a rally starts, the game is played with regular beach volleyball rules. If a team on the challenger's side makes a serving mistake, there will be no points given. However, in the last two minutes of a round, every three service mistakes are one point.

When a new team enters the King's side, the service mistakes will go to zero and the count starts again. In the last 30 seconds of a round, every service mistake is one direct point.

Unlike regular beach volleyball, there is a clock for this game. There is a maximum of eight seconds between rallies, so the pace is fast. Games are 15 minutes — except the final, which is 15 minutes (most points at that time wins) or first to 15 points.

After each round that is played, the team with the least amount of points scored in that round will be eliminated.

Watch out for the Golden Ball. At various times during the tournament, teams can earn one of these, which they can retain and use later in order to replay a rally that did not go in their favour.