Beach volleyball world champions Sarah Pavan and Melissa Humana-Paredes get back onto the sand at the 2020 Champions Cup in Long Beach, Calif., this weekend, but the partners aren’t expecting a “We’re back!” moment.

After a 10-month hiatus, reigning world champions look to shake off some rust

Beach volleyball world champions Sarah Pavan and Melissa Humana-Paredes get back onto the sand at the 2020 Champions Cup in Long Beach, Calif., this weekend, but the partners aren't expecting a "We're back!" moment.

The COVID-19 global pandemic has resulted in the pair enduring a 10-month hiatus – the longest layoff for either in their pro careers – and the three-week, eight-team event will give them a whole new set of mental and physical challenges to add on top of an already challenging quarantine.

"I think we're both preparing to have a super unique experience," Humana-Paredes told CBC Sports. "When we were discussing this as a team with our coach and our sports [psychologist] about whether we were going to play this or not, one of the things we talked about was just coming down to finding the joy in playing again and being reunited."

Gameplay won't be the only thing that feels unique. All of the teams will be isolated throughout the tournament, making the off-court experience different as well. So perspective, says Pavan, will be key.

WATCH | The psychological roller-coaster of return to play: 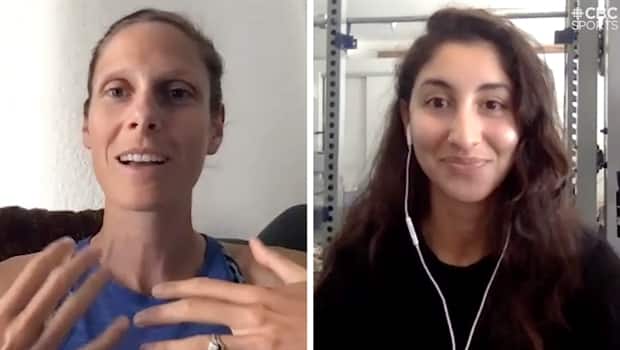 4 months ago
5:16
Sarah Pavan and Melissa Humana-Paredes open up on how their sports psych helped them during COVID-19. 5:16

"We understand we're not going to play at the level we were at last season or even how we were feeling during our pre-season right before everything shut down," she says. "Obviously we're going to try our best, we're working super hard, we're going to compete as hard as we can.

"But it's not going to be devastating or life changing if we don't perform at our max right now."

One of the more challenging things for the duo to remember is not to touch each other.

"It's weird," Humana-Paredes says, as Pavan nods in agreement. "I have gone in for high-fives quite a few times and been like 'Sorry, I won't do that again.'

"It's also tough because that's something we do to let each other know we're here and supportive, so we're going to have to figure out how we'll do that differently come competition day." 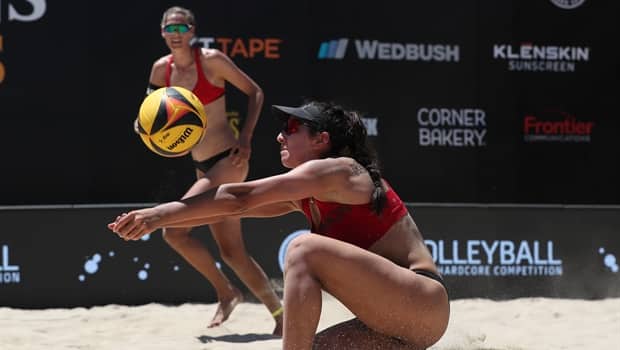 3 months ago
1:03
Sarah Pavan of Toronto and Melissa Humana-Paredes of Kitchener, Ont., fell in three sets to Americans Alix Klineman and April Ross in the semifinals of the AVP Monster Hydro Cup. 1:03

Managing energy may be the bigger challenge for the duo, who emphasize that each team has a different personality: some intense and vocal, others low-energy and quiet. And despite having experience playing on quiet side-courts or at events with few fans, Pavan and Humana-Paredes expect a tournament with no fans to amplify whatever tone the other team sets.

"You can also feel it in those matches that aren't in the medal rounds where the team just has zero energy," Pavan says. "It's so hard to play those teams sometimes because the court just seems dead. And to get yourself and your side of the court amped up can be challenging, especially if you happen to be winning by several points or if the match isn't super tight and there's not that emotion tied to it.

"I think that's a challenge of a momentum-based sport in general, so it'll be very interesting to see how it plays out."

Humana-Paredes characterizes herself and Pavan as an intense, high-energy team: she is the vocal one while Pavan is less so, but gets "fired up" playing the teams with serious attitudes.

"It's the mental side," Pavan says. "You can really break people with that kind of back and forth."

Humana-Paredes calls it the game within the game.

"It'll be different and I think we'll need to be mindful of who we're playing and how we can bring the energy for ourselves and still stay focused and in the game in the same way we want to be."

Then, of course, there's the physical aspect of coming back.

The two were separated for the better part of four months, while doing their best to maintain fitness. Right after the announcement of the Champions Cup, just four weeks before their first match on July 17, Toronto-based Humana-Paredes immediately booked a flight from Victoria to California to join Pavan, who already lives in the state.

They got back on the sand for the first time in three months. For the first few weeks they took it easy to avoid injury, still training hard separately and focusing on individual skills.

They officially got back on the sand together in their final week of prep, all while maintaining social distancing.

"Everything has been super condensed," Humana-Paredes says. "I think we can be really hard on ourselves to demand performance and be at the level that we were at before and try and hold ourselves to that standard.

"But we are being mindful that this is not a usual preparation period for us and we've had some time off."

So the team is as ready as they can be to rev their engines once again, at least for the next few weeks. After that, they may slow right back down again as COVID-19 casts uncertainty about any more competitions in the near future. That's why the team hesitates to consider this as anything more than a great opportunity to play. 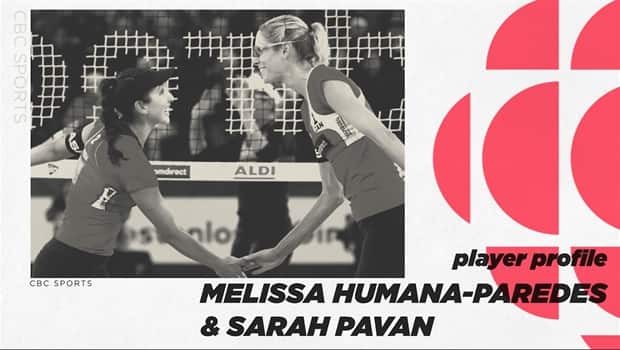 "I don't really know if we're looking at this as Olympic prep," Humana-Paredes says, referring to the Games rescheduled for July 23, 2021. And Pavan agrees.

"To have this opportunity just seemed like the perfect storm," she said. "We can get back together, we can touch the volleyball and we can have the opportunity to earn some income.

"This is a great opportunity to break up what could have been a very, very long period without playing volleyball."

Jacqueline Doorey is a digital host and producer for CBCSports.ca