Kenya's Peres Jepchirchir bettered the women's half marathon world record when she took gold in a closely-fought race at the World Athletics half marathon championships in Gdynia, Poland, on Saturday.

Peres Jepchirchir of Kenya broke her own world record in the women's-only half marathon Saturday, clocking one hour, five minutes and 16 seconds.

The 27-year-old Jepchirchir improved on her record by 18 seconds on a four-lap course, taking gold at the World Athletics half marathon championships in Gdynia, Poland.

Jepchirchir broke the record for the first time on Sept. 5, when she ran 1:05:34 in Prague.

Six women finished in under 66 minutes in what was a fast course on the streets of Gdynia along the Baltic coast of northern Poland. 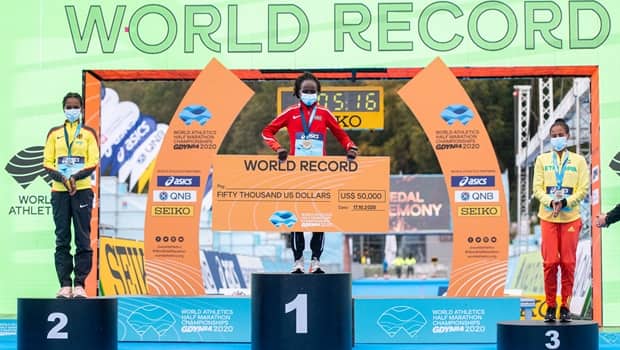 Kenya's Jepchirchir breaks own world record in women's half marathon

10 days ago
2:43
Peres Jepchirchir of Kenya broke her own world record in the women's-only half marathon in Gdynia, Poland, clocking one hour, five minutes and 16 seconds. 2:43

Melat Yisak Kejeta of Germany finished second in 1:05:18, followed by Yalemzerf Yehualaw of Ethiopia at 1:05:19.

Kandie was the fastest man over the distance this year having run 58:38 in Prague last month.

Kiplimo's compatriot Joshua Cheptegei, who holds both the 5,000m and 10,000m world records, finished in a time of 59:21 on his half marathon debut to earn fourth place.

The event was originally scheduled for March but was postponed to October due to the COVID-19 pandemic.

For more coverage of the half marathon championships, tune into Road to the Olympic Games at 5 p.m. ET.

Earlier this week, Athletics Canada withdrew its team from the competition after the organization's chief medical officer deems travel too risky due to COVID-19 concerns.