The native of Cobden, Ont., placed 14th among 29 finishers after pushing the pace around the 25-kilometre mark of the 42.2 km race, putting himself on track for a 2:10:15 finish.

"Having the opportunity [to race] was awesome. And then being able to capitalize on that opportunity just feels great," Woodfine told The Canadian Press.

"Right now, there's really no guarantee that there would be another opportunity [during the coronavirus pandemic], so it feels good to come here and deliver even when the conditions weren't optimal."

Less than three hours after Woodfine finished his race, Montreal native Brent Lakatos won the men's wheelchair competition in 1:46:04 to go with his 2018 Berlin Marathon victory.

A year ago, Woodfine clocked a 2:13:16 PB to finish second among Canadian men at the Toronto Waterfront Marathon, a two-minute drop from his previous best of 2:15:19 just nine months earlier at the Houston Marathon in January 2019.

The former triathlete was excited to see how he would perform in London after a strong summer of training that included four or five quality long runs of 30-40 km on a 1.8 km flat loop course near his home in the Ottawa Valley.

"I think he's going to surprise some people," Canadian record-holder Cam Levins said of Woodfine in an interview with CBC Sports after they trained together earlier this year in Kenya. "If he's even in similar shape to what he was in Kenya, he'll do awesome."

In a Zoom call on Saturday with his coach, Greg Kealey, Woodfine agreed he should make a charge just past the midway mark of Sunday's race.

"Looking at the splits, he followed that to perfection," said Kealey, who founded the Ottawa-based Bytown Storm Triathlon Club in 2001. "I think he could have run closer to 2:10:20 but he totally lost pace [over] the last 7K.

"It may have been the [cool and wet] weather catching up with him, or we need a bit more depth of fitness, but he did everything exactly the way we discussed."

Sunday's men's elite-only race was contested in a "secure biosphere" or bubble on a 2.15 km loop sealed off from the public around St. James' Park in central London, replacing the traditional tour of city streets due to the coronavirus pandemic. Runners completed 19 laps, plus 1,345 metres en route to the iconic finish on the Mall in front of Buckingham Palace while 45,000 others from over 100 countries participated in a virtual marathon.

The addition of 5,000- and 10,000-metre track work to his summer training, Woodfine said, made the slower-type marathon workouts "more relaxing and easy."

Mega congrats to former junior triathlete and top university runner Tristan Woodfine on his sub 2:11 Olympic qualifying run today at the London Marathon. Much respect on a big effort in an odd year.

Kealey noted the goal ahead of the Tokyo Olympics would be to cut another "two minutes or so" off Woodfine's time from Sunday.

"I do think he would be able to run under 2:10 on any given day by next year," he added, "so that would be the expectation."

Ethiopia's Shura Kitata ended Eliud Kipchoge's four-year winning run on Sunday in a sprint finish in 2:05:41, 1-100th of a second ahead of Kenya's Vincent Kipchumba, while Sisay Lemma of Ethiopia was third in 2:05:45. Kipchoge, the world record-holder from Kenya, was eighth in 2:06:49.

In a women's race devoid of Canadians, Brigid Kosgei of Kenya took a commanding lead entering the final lap and retained her title, stopping the clock in 2:18:58. 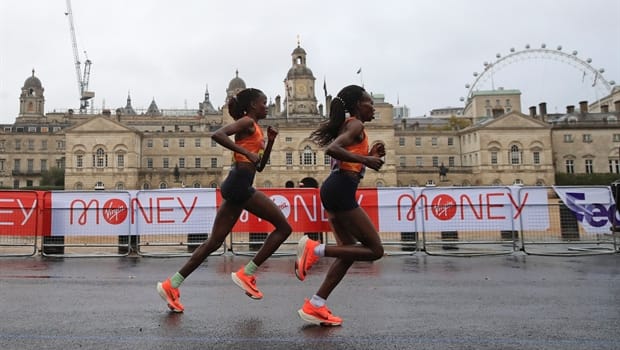 Levins, who was spotted walking late in Sunday's race, dropped out of his third marathon before the finish when it became clear he probably wouldn't run below 2:11:30. The Black Creek, B.C., native was 12th through 35 km and on pace to finish 5-100ths of a second off his 2:09:25 national mark from his debut marathon in 2018 at the Toronto event.

Unfortunately, Levins said, his body didn't handle the cool and wet conditions well, to the point he could "barely move" when he stopped.

"I just got colder as the race went along," he said. "I was in a group with one or two athletes, at best, for most of the race and I think it left me pretty exposed to the elements. The pace felt pretty comfortable to me for most of the race, but eventually I was at a point where I physically couldn't even grab a hold of my bottles to fuel anymore."

Sorry everyone I ended up frozen out there today. Won’t let this fitness go to waste though and I’ll be back out there soon! Congrats to Tristan Woodfine. You the man!

The 31-year-old, who has yet to achieve the Olympic standard, had only ramped up his training for London in late August — a typical marathon buildup can last 12 to 18 weeks — yet was "ready for something really quick with the right day."

Levins' coach, Jim Finlayson, said the runner isn't injured and will wait for Levins to return home to have a full debrief with him.

"As of Sunday he was physically okay, beyond the expected marathon soreness magnified by the weather conditions," Finlayson said. "I have a lot of respect for his physical and psychological resilience. We'll gain what we can from the experience and look to express his fitness somewhere else."

Calgary resident Trevor Hofbauer is the only other Canadian male to have secured a spot for Tokyo after he gained an automatic berth as top Canadian in the men's race at last year's Toronto Waterfront Marathon.

Lakatos, who lives about 140 km northwest of London in Longborough, England, finished 12th at last year's London Marathon, so it's safe to say testing the racing wheelchair the University of Texas engineering grad designed earlier this year paid off in a big way Sunday.

In 2019, the 40-year-old native of Dorval, Que., won two gold medals and a silver at the World Para Athletics Championships. In all, Lakatos has won 18 WPA medals, including 13 gold.

A seven-time Paralympic medallist, Lakatos is hoping to make a fifth Summer Games appearance in Tokyo.

In June, the 11-time world champion was named Para-athlete of the year by Athletics Canada.

Meanwhile, Sara Hall became the first American woman to finish on the podium since Deena Kastor won the London Marathon in 2006, placing second in a personal-best 2:22:01 ahead of world champion Ruth Chepngetich (2:22:05) of Kenya, whom she overtook in the final metres.

Sara was in 3rd, Chepngetich in second but her last 5k (to 40k) was 18:13, Sara’s split was 17:11. <br><br>Sara kept the momentum going and closed on Chepngetich, AND PASSED her in the home stretch! So proud of her build up and her effort today! <br><br>2nd place at the <a href="https://twitter.com/hashtag/LondonMarathon?src=hash&amp;ref_src=twsrc%5Etfw">#LondonMarathon</a> <a href="https://t.co/Pb1v5ndJTO">pic.twitter.com/Pb1v5ndJTO</a>

Kosgei, the 26-year-old world record-holder, comfortably won her duel with Chepngetich, the world champion. Kosgei broke for home with 11 km remaining to leave Chepngetich, who had looked the stronger in the mid-stages of the race, far behind.

"The weather was not good so we struggled," Kosgei said. "I struggled up to the moment I finished.

"We have not prepared well due to the pandemic. I will be prepared for good results next year."