Katerina Stefanidi of Greece, who won Olympic gold in 2016, reeled off 25 consecutive jumps before a failed attempt en route to a winning total of 34 to defeat American Katie Nageotte and Canada's Alysha Newman in a virtual women's pole vault event on Saturday.

A laughing Alysha Newman called it the "happiest" third-place performance of her pole vault career.

Under the sun in Bolton, Ont., the Canadian women's indoor/outdoor record holder made 21 successful jumps in 30 minutes at four metres but fell short of reigning Olympic champion Katerina Stefanidi, who cleared 25 consecutive times before a failed attempt en route to a winning total of 34 from her training facility in Athens.

Two-time U.S. indoor winner Katie Nageotte was second in the remote competition contested during the coronavirus pandemic, clearing the bar 30 times over two 15-minutes sessions from her training facility in Marietta, Ga.

The trio combined for 85 clearances, 13 short of the total compiled by Renaud Lavillenie and Mondo Duplantis (36 apiece) and Sam Kendricks at five metres from each of their backyards on May 3 in first running of the Ultimate Garden Clash. The women had envisioned a combined 100 clearances and bragging rights.

The 25-year-old Newman started slow, missing her first attempt and twice in five tries, but the 2018 Commonwealth Games champion got into a groove when she made her final four jumps in three minutes before the five-minute halftime. 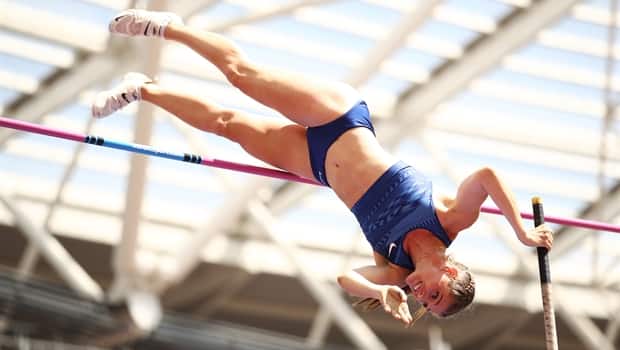 Newman said the excitement of being part of the event caused her to rush and was notified by a teammate standing nearby that she was returning to the start of the runway after a jump within 20 seconds, or 10 seconds quicker than she intended.

"Next time, I'm going to take a deep breath [after each jump] and walk back, not jog and listen to my body," she told reporters, adding her stomach began to cramp in the second half.

'This was for everyone watching'

Newman went 8-for-8 coming out of the half before registering her fourth and final failure on the day. With more misses than her opponents — Stefanidi had two and Nageotte one — Newman lost valuable time since only she could reset the bar.

WATCH | Newman 'proud' to be part of unique competition: 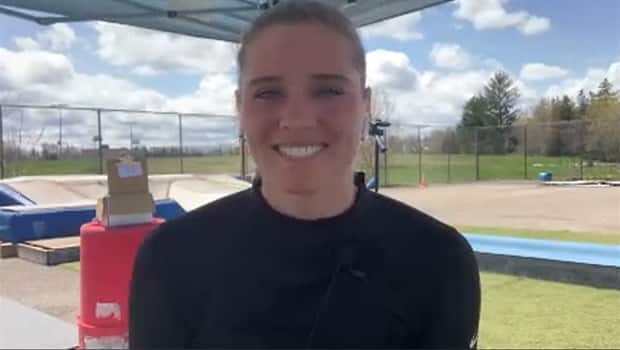 10 months ago
1:08
The Canadian pole vaulter opens up about Saturday's unique pole vault event and educating people about the sport. 1:08

A practice on Wednesday marked Newman's first jump session in three weeks after she moved out of a warehouse she rented with coach Doug Wood for winter training when her training facility, Bolton Pole Vault, was closed to the public during the COVID-19 pandemic.

Behind the scenes in the FIRST women’s <a href="https://twitter.com/hashtag/ultimategardenclash?src=hash&amp;ref_src=twsrc%5Etfw">#ultimategardenclash</a> !! I’m so thankful for everyone who helped out today and made this so fun! I challenge myself today not knowing what to expect but we got through it ! Thank… <a href="https://t.co/pZ4O4Akl4q">https://t.co/pZ4O4Akl4q</a>

"I'm really, really proud of myself by coming out here and still [doing] 21 jumps in 30 minutes," said Newman, who was also hurt by stopping on her approach a few times, unlike Stefanidi and Nageotte, and forced to reset. "I had to keep thinking to myself, 'Tll knees. Tall toes, tall at take-off.' I felt so tired and heavy in the second half."

"At the end of the day, this was for everyone watching," said Newman, who beat Stefanidi on Aug. 24, 2019 in her fifth attempt of the Diamond League season for her first-ever victory on the pro circuit. "We want to educate people on pole vault. We want to show them how physical it is and how mental it is. It's such a precision sport with wind and x-factors." 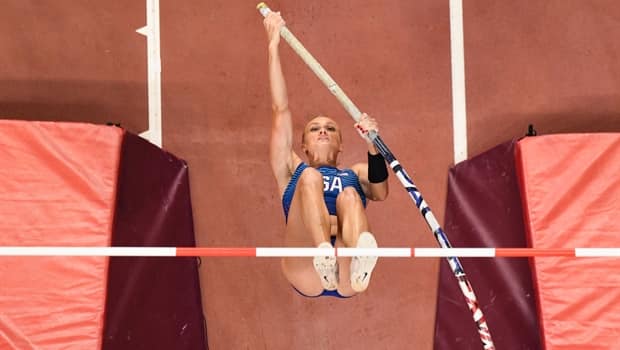 Stefanidi, 30, held a three-jump advantage (26-23) over the 28-year-old Nageotte midway through the second half and increased it to five with five minutes left.

The Greek athlete said she had "a ton of fun" and only wished it was cooler as the temperature in Athens neared 40 C.

"I had some issues with my grip," said Stefanidi, a three-time Diamond League champion. "I kept sweating and couldn't keep my hands stable, so that definitely added seconds to my jumps."

Stefanidi noted the virtual event, an idea brought forth by Lavillenie, was "a great idea" and challenged her in many ways.

"It brings so many elements together — speed endurance, power, speed, technique," she said. "I was surprised my upper body was so tired. I felt my legs would be tired."

During Saturday's event, retired American decathlete and two-time Olympic champion Ashton Eaton suggested the women's winner should oppose Lavillenie and Duplantis at the next virtual event. Stefanidi is game but said she would need three weeks to recover after Saturday's test.

"[The men] were also jumping 1.20 metres under their [personal-best] and I was jumping 90 centimetres under mine, so we would have to adjust the heights."

While Nageotte was thrilled to attain her goal of 30 jumps, she admitted to needing every second of every minute between jumps.

"I'm not an endurance athlete in any way, shape, or form," said the 2019 Pan Am silver medallist. "All of my training partners and coaches can attest to that. My coach [former world-record holder Brad Walker] laughs during my endurance workouts in pre-season. I knew if I went way too much too soon [on Saturday] I wouldn't be able to get up the second half."

Besides Canada, Greece and the U.S., Saturday's event attracted viewers from several countries, including Italy, Barbados, Israel, Australia and Mexico.

On May 12, the Diamond League announced a revamped calendar of athletics meetings after the July 4-5 London event was cancelled. Three events are scheduled for August, beginning with Monaco on Aug. 14, followed by competitions in September in October.

Newman is hopeful of training more outdoors within the next two weeks, weather permitting, and is planning to be ready to compete in August. During her recent workouts, the London, Ont., native, enjoyed returning to the basics and relearning the sport to be that much more advanced when competition resumes.

"The ultimate goal is to make me better on the other end, so a lot of raised runways and plyometrics [jump training] to get me strong, increase my speed and hopefully test it in August when the season [starts]," Newman said.