Competing on a sun-splashed track in Montpellier, France, the 28-year-old was defeated by 2019 world champion Niklas Kaul of Germany and silver medallist Maicel Uibo of Estonia in the shuttle run competition, but had built a healthy lead in pole vault and shot put to take the title.

"I saw the children there, it was amazing and they gave me strength. I had my crowd to encourage me," Mayer said of two kids who watched his performance from an entrance to the track.

"I woke up nervous today. I've missed that feeling the last couple of months" while idle from competition during the COVID-19 pandemic.

Last October, Mayer withdrew in tears at the track and field world championships in Doha, Qatar, when he was unable to complete the final two events due to injuries to his hamstring and Achilles tendon.

WATCH | Kevin Mayer vows to be better at Tokyo Olympics: 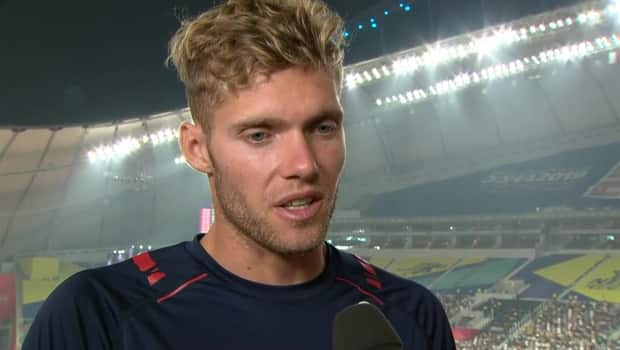 12 months ago
2:44
Reigning world decathlon champion Kevin Mayer of France vowed to get "revenge" at the Tokyo 2020 Olympics after an injury forced him to quit while in the lead at the world track and field championships. 2:44

Kaul, then 21, went on to win the javelin and 1,500 metres for the gold medal, becoming the youngest decathlon medallist ever at worlds. He finished with 8,691 points, 87 more than Uibio, while world No. 1 Damian Warner of Canada won bronze with 8,529.

On Sunday, Kaul performed indoors in Mainz, Germany, while Uibo — the husband of 2019 world 400 silver medallist Shaunae-Miller-Uibo — was stationed in Clermont, Fla.

Mayer started his day clearing a four-metre bar 17 times in a 10-minute time limit to win the pole vault competition, with Uibo and Kaul posting 15 and 14 successful jumps, respectively. It was an impressive feat considering Uibo and Kaul started 25 seconds ahead of Mayer, who was spotted drinking water as the event began.

He had it dialed in where he was barely clearing the bar and using the minimal amount of energy.— Retired decathlete Ashton Eaton on Ultimate Garden Clash winner Kevin Mayer

With the bar set low — his personal-best is 5.45 metres — Mayer smartly used a six-step approach, compared to eight steps by Uibo, who said he would have gone six steps had he used a smaller pole. Mayer held a two-jump lead midway through the event and held on as the 27-year-old Uibo closed to within one with 50 seconds remaining.

"He had it dialed in where he was barely clearing the bar and using the minimal amount of energy," said Eaton of Mayer. 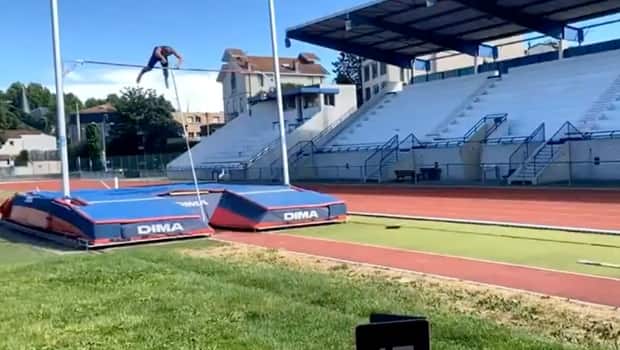 It wasn't a surprise to see Mayer rule the shot put event after he turned in a 17.08-metre PB at last year's worlds. He jumped out quickly and never relinquished the lead, throwing a 7.26-kilogram iron ball on or beyond a 12-metre line 28 times in 10 minutes.

Mayer held a three-throw advantage after five minutes (13-10 over Kaul) and increased it to five (16-11 over each of his opponents) with 3:40 left.

Eaton said Mayer was "insanely consistent" in the shot put with the ability to hit the same spot with nearly each throw.

Humidity a factor for Uibo

Uibo was throwing in a temperature of 28 C with "crazy humidity" and noted the shot put was "a little tricky" but understood it would be difficult. If he had a do-over, Uibo said he would have started faster in the shot put.

"It wasn't actually that hard," he said, "but when I started sweating more and jogging [to pick up the shot] my neck got a little slippery. The shuttle run … [I would] keep the same pace and maybe wear spikes." 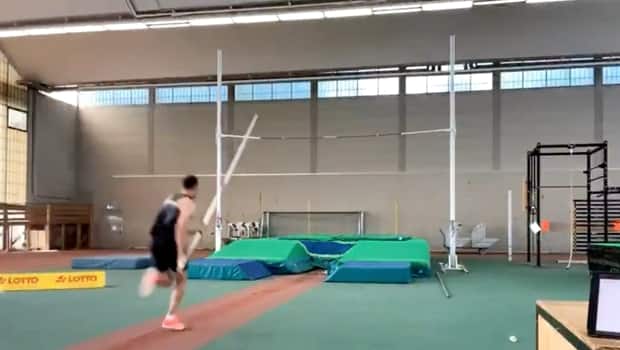 4 months ago
1:13:52
Kevin Mayer, Niklas Kaul and Maicel Uibo, three of the world's top decathletes, compete in various events from their own training facilities. 1:13:52

Mayer's nine-point lead entering the shuttle run — the third and final event of the day — turned out to be huge as the 22-year-old Kaul collected 27 points for each completed back-and-forth shuttle around two cones placed 20 metres apart. Mayer and Uibo each completed 26 circuits.

"It was easier than a 1,500 [at the end of a 10-event decathlon] because I'm good at sprinting," said Mayer. "I think I was better at the acceleration [today]."

Eaton, a two-time world and Olympic champion, attempted the shuttle run a few days ago to get a sense of how he would feel aerobically compared to a 1,500 and said it was "taxing" on the body.

"It's a different workout that athletes aren't used to," he added. "You have to understand, as track athletes or decathletes, we train a very specific way for a very specific outcome so a slight change, even though we are good athletes and can handle it, the body reacts differently."

The difference overall, according to Eaton, was Mayer's speed and efficiency strategy he believed worked well over time.

"For the whole competition, I wasn't necessarily expecting Kevin to win," he said. "I thought it would be close between everybody. These guys are the future of the sport so I'm happy they're out here representing in these uncertain times."