Damian Warner finishes in fifth place in the decathlon at the track and field world championships in London. Warner started his second day of competition by clocking the fastest time in the 110-metre hurdles to move into third overall.

Canadian was a favourite to win gold

Canada's Damian Warner finished in fifth place in the decathlon at the track and field world championships in London, England, on Saturday.

Warner started the second day of competition by clocking the fastest time in the 110-metre hurdles to move into third overall.

Damian Warner on decathlon finish: 'It's these competitions where you feel like you've learned the most'

The London, Ont., native, who is recovering from a stomach bug that has plagued other athletes at the event, recorded a time of 13.63 seconds in the hurdles.

"Damian looked like a man who had just had a debilitating bug. I was very impressed that he was prepared to compete after suffering the virus that hit the Canadian and other teams," said CBC Sports analyst David Moorcroft.

'He didn't look himself'

However, Warner's ninth-place result in his group in the discus throw (40.67 metres) dropped him back to fifth.

In the last event of the morning session, Warner cleared a season's-best 4.70m in pole vault, but missed all three of his attempts at 4.80 to finish fourth in his group.

Warner concluded the decathlon with a fourth place result in the 1,500 clocking a time of 4:28.39 to finish in fifth place overall with a total of 8309 points. 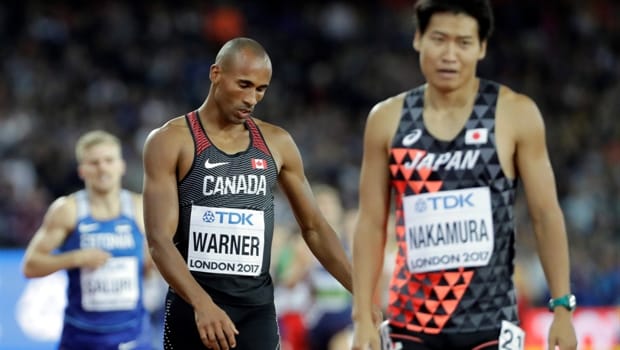 "From the first event — the 100 — he didn't look himself and he made a valiant attempt to win a medal but it wasn't meant to be. He is a class act and a fully fit Damian will still be hard to beat on the world stage," Moorcroft said.

Kevin Mayer of France took the gold with a world-leading score of 8768 points, Rico Freimuth of Germany the silver with 8564, while German teammate Kai Kazmirek rounded out the podium with a season-best 8488.

"I was happy that I was able to finish with a strong 1,500 because it's so easy to go out there and just jog it," Warner said.

Warner fell ill earlier in the week with the viral gastroenteritis that has affected 40 athletes at the meet so far, and spent Tuesday and Wednesday quarantined in his hotel room.

There were moments where the Canadian felt like giving up but constant encouragement from his coach and physiotherapist kept him going.

"They were so many times where I mentally checked out and I just physically wanted to check out as well. But they just kept telling me to take it one event at the time and I did just that," Warner said.

On Friday, Warner ran a season-best time of 47.47 seconds in the 400, moving into fourth place in the final event of the day.

"I'm hoping that I can put a special day [Saturday]," he said.

Warner was chasing his first decathlon world title after taking the silver medal in 2015 and bronze in 2013. He claimed bronze at last year's Olympics. American Ashton Eaton, who is now retired, won gold each time.

"Crossing that [finish] line and not being able to be one of those guys that gets to drape that flag around your shoulders, it's tough," Warner said.

"Seeing them on the podium tomorrow is also going to be tough. I don't want to be there again so I'm gonna keep working and fix the things that need to be improved on and come out stronger and get back on the podium."